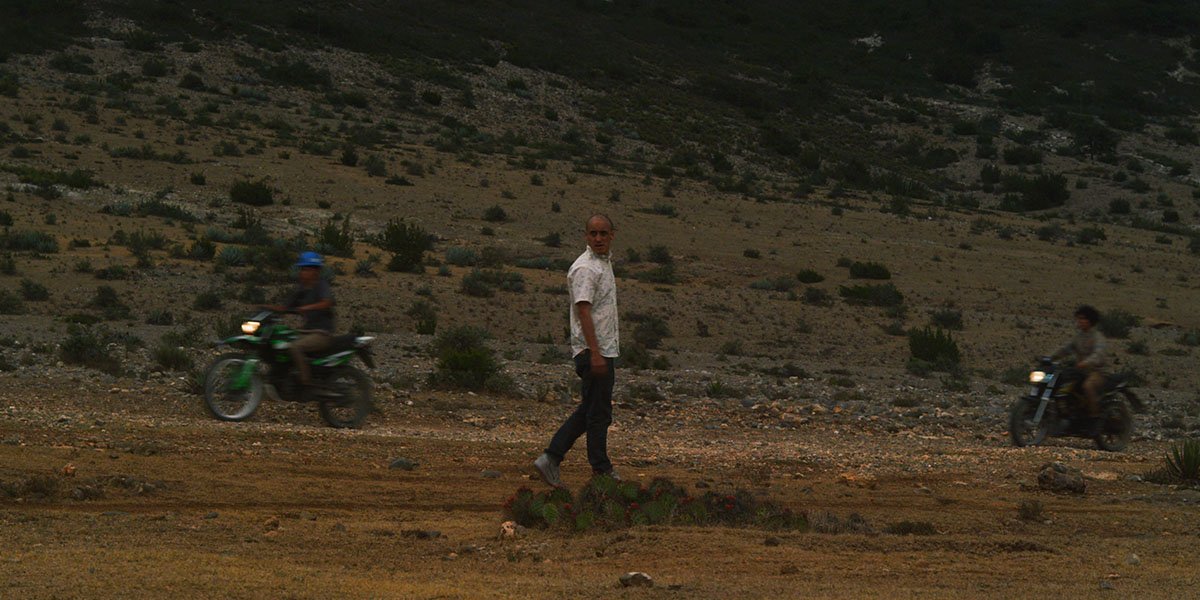 Fauna, the ninth (and in some ways, most straightforward) film from Mexican-Canadian writer-director Nicolás Pereda, is a keenly perceptive, metafictional look at the impact “true to life” popular culture has on everyday society. Uniquely profound and sometimes hilarious, Fauna is one of Pereda’s most memorable, enjoyable, and poignant works.

Luisa (Luisa Pardo) and her fellow actor boyfriend, Paco (Francisco Barreiro), are travelling to a quiet, borderline abandoned mining town in Northern Mexico to meet up with her brother, Gabino (Lázaro Gabino Rodríguez), who describes his current profession only as “working for a normal agency.” The siblings are going to visit their parents for the first time in three years, and it’s immediately apparent – especially to Paco, who gets strange looks for appearing on the series Narcos (and the actor was actually on a season of the show) – that locals don’t seem to trust outsiders.

Fauna functions both as social commentary on life in Mexican border towns where violent crime is prevalent, as well as a deconstructed examination of the impact well told fiction can have on reality. Pereda playfully depicts everyone who comes into contact with the leads (including the parents) as mistrusting, yet deeply curious people. It’s the type of strange eeriness that Kubrick, Kurosawa, Bresson, and Lynch have excelled at crafting over their careers, but Pereda’s style and point-of-view are so specific to his culture and characters that he’s on a level of his own.

Beyond scenes where the actor characters are being told by those close to them that they’re doing their jobs wrong, Fauna is a surprisingly poignant and disarmingly empathetic discussion about social anxieties and frustrations. In Pereda’s world, everyone has a part that they play, and they’re experts at fulfilling that role. The viewer will only get to know as much about the characters in Fauna as they see, but thinking about them outside the boundaries of Pereda’s work here is just as satisfying as the film itself.

Fauna screens in cinemas again at TIFF Bell Lightbox as part of the 2020 Toronto International Film Festival on Friday, September 18 at 12:30 pm. It is also available to stream online for a limited time via Bell Digital Cinema starting at 6:00 pm on Friday, September 28. All online screenings for TIFF 2020 are geolocked to Canada. If seeing a film in cinemas, please take all necessary precautions. Practice social distancing, wear a mask, and please stay home if feeling ill.