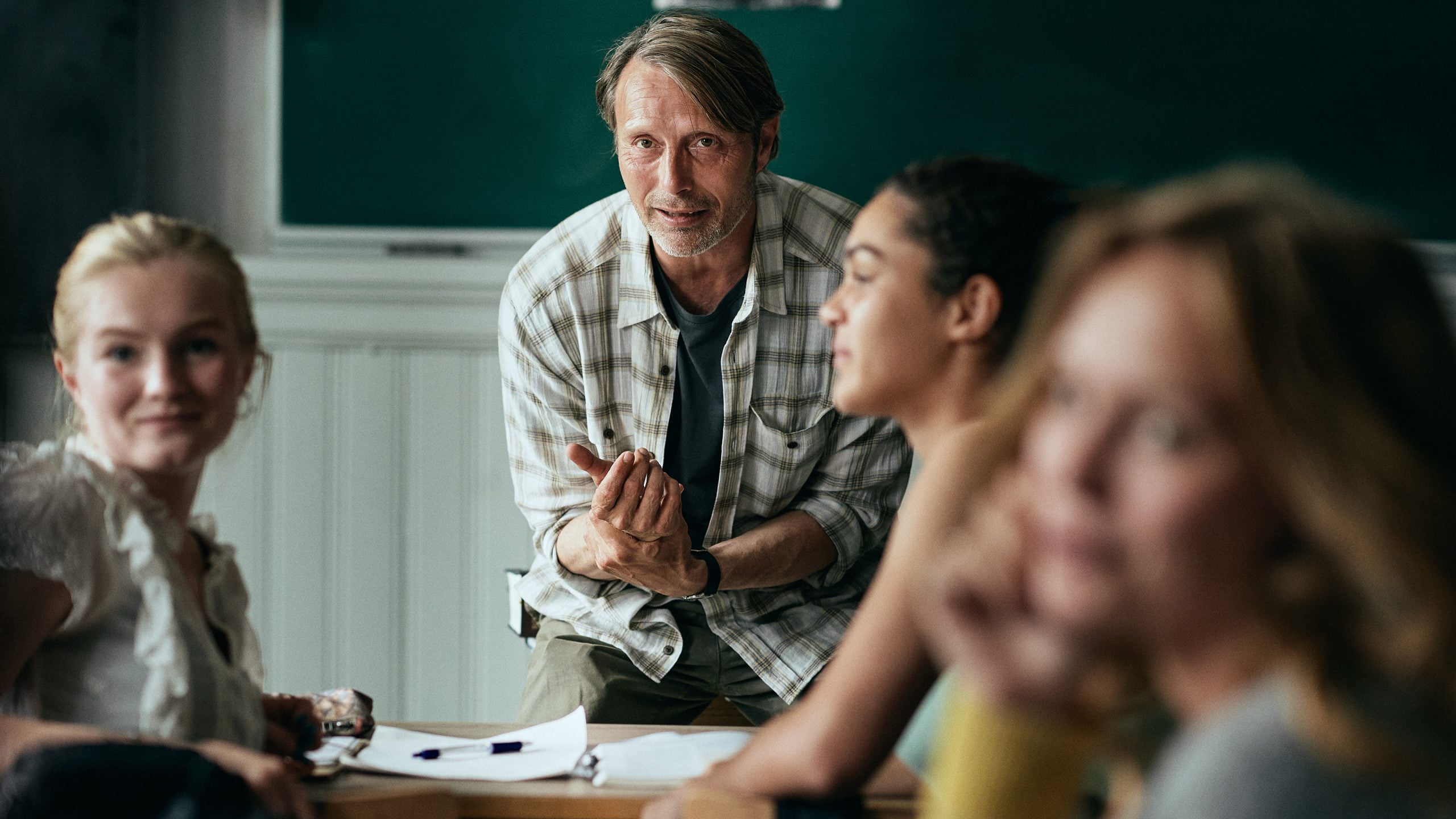 Although hampered somewhat by the inherent predictability of its premise, Another Round is another solid effort from esteemed Danish filmmaker Thomas Vinterberg. His first collaboration with star Mads Mikkelsen since the gutting 2012 film The Hunt, Another Round is a tale of various forms of toxicity; not just the alcoholic kind that’s alluded to in the title.

High school history teacher Martin (Mikkelsen) has been in a mid-life slump for quite some time. His wife (Maria Bonnevie) and sons barely notice if he’s coming or going anymore. His students pay even less attention. He floats through his days in a perpetual, joyless funk. One night, while celebrating the fortieth birthday for one of his inner circle of friends, an unusual idea for an experiment is hatched. Nikolaj (Magnus Millang), the person turning forty and one of Martin’s co-workers, brings up an idea floated by Danish philosopher Skårderud that all humans should operate throughout their day with a blood alcohol level equal to one or two drinks in their systems at all times. Nikolaj convinces his friends – including the previously straight-edged Martin – to take part, gradually upping their alcohol intake as they go. At first, the experiment gives the four men (including actors Lars Ranthe and Thomas Bo Larsen) added confidence and a new lease on life.

But one doesn’t have to know much about alcoholism to know that there’s no possible way Another Round will end well for its characters, meaning the viewer is never really in doubt about the potential for an unhappy or bittersweet ending. Thankfully, Vinterberg is somewhat of a master of pulling off unhappy or bittersweet endings. The best decision Vinterberg makes here (other than casting performers who perfectly understand the material) is to turn Another Round into a dark comedy rather than a sobering drama. There are some moments that are inherently unfunny, but the premise is meant to be a cheeky one.

It’s hard to strike a balance that makes fun of the characters’ toxic masculinity and their burgeoning addictions (not only to drink, but to the confidence that it brings) while still treating the core disease with any degree of respectfulness. Vinterberg almost pulls it off rather well, but Another Round is more or less exactly what the viewer will expect it to be going in: a cautionary tale. It’s disappointing that Another Round doesn’t go the extra mile in many departments, but it’s still better than a lot of films on the subjects of peer pressure, depression, male friendships, and destructive vices.

Another Round screened at the 2020 Toronto International Film Festival. It is available across Canada on VOD starting Friday, December 18, 2020