A rare example of a lighthearted romp that’s as timely as it is amusing, the young adult adventure and mystery Enola Holmes establishes a new cinematic hero just when the world could use it the most. Adapted from Nancy Springer’s series of history-adjacent novels that follows the sleuthing younger sister of famed literary detective Sherlock Holmes, it’s a colourful, frequently raucous, and smartly drafted origin story that delivers a solid origin story, while leaving viewers wanting to continue along with future adventures. Enola Holmes balances its obvious goals of kickstarting a new franchise with a clever degree of well timed subversiveness and social commentary. It’s not just a kids movie. Politically and historically savvy adults and younger viewers seeking mystery, theatrics, and derring-do will certainly get the most out of Enola Holmes.

On the day of her sixteenth birthday, Enola’s mother, educator, guardian, fight trainer, and closest confidant (Helena Bonham Carter) has gone missing. Mom has left behind a slew of clues that can lead Enola (Millie Bobby Brown) to her, but before she can get serious about the search, her weasley uncle Mycroft (Sam Claflin) – the young woman’s new legal guardian – arrives, keen on throwing the eccentric and progressively minded teen into a private school that will teach her how to be a proper lady and know her place in a male dominated society. Her other brother, Sherlock (Henry Cavill), accompanies Mycroft, but he chooses to stay out of the family drama, focusing instead on the search for mother. The crafty Enola gives everyone the slip and sets out for London to find mum, but another mystery arises when she crosses paths with Lord Tewksbury (Louis Partridge), a young viscount on the run from people who want to kill him.

Set against the backdrop of the British suffragette movement, Enola Holmes is a blockbuster coming at the right time. Although it’s aimed at a slightly younger crowd than those who will be heading to the ballot boxes in this tumultuous year, Enola Holmes is a great tool to teach the importance of voting and the many reasons why democracy is worth fighting for. Although Enola Holmes is set in the late Victorian period, there’s a timeless quality to the story’s stance on womanhood and politics, and one that doesn’t speak down to the audience. It treats young viewers like equals to adults, and it doesn’t treat adults like fools for choosing to watch something that looks like a fluffy adventure yarn on its surface. The reasons behind mother’s disappearance and the young nobleman’s need to go on the run dovetail nicely into the well constructed adaptation provided by Jack Thorne (who most recently worked on the most recent remake of The Secret Garden and the HBO/BBC adaptation of His Dark Materials).

The underlying subtext of Enola Holmes is aided nicely by the casting of Cavill and Claflin in supporting roles that speak to two prevalent and insidious attitudes that still exist today. Claflin is having a moustache twirling blast as Enola’s biggest antagonist, a man who believes young people – especially young women – shouldn’t be seen or heard outside the home; a devout anti-feminist who sees any showcase of independence as an affront to his way of life. But while Claflin gets to play a more obvious villain with aplomb, Cavill is playing a character that isn’t evil, but is still just as potentially dangerous. Cavill portrays the world’s greatest detective as one of those “I don’t want to get political, so please keep me out of the discussion” types. He doesn’t want to help or harm Enola, and his wishy-washy allegiances provide the film with a good deal of dramatic tension. 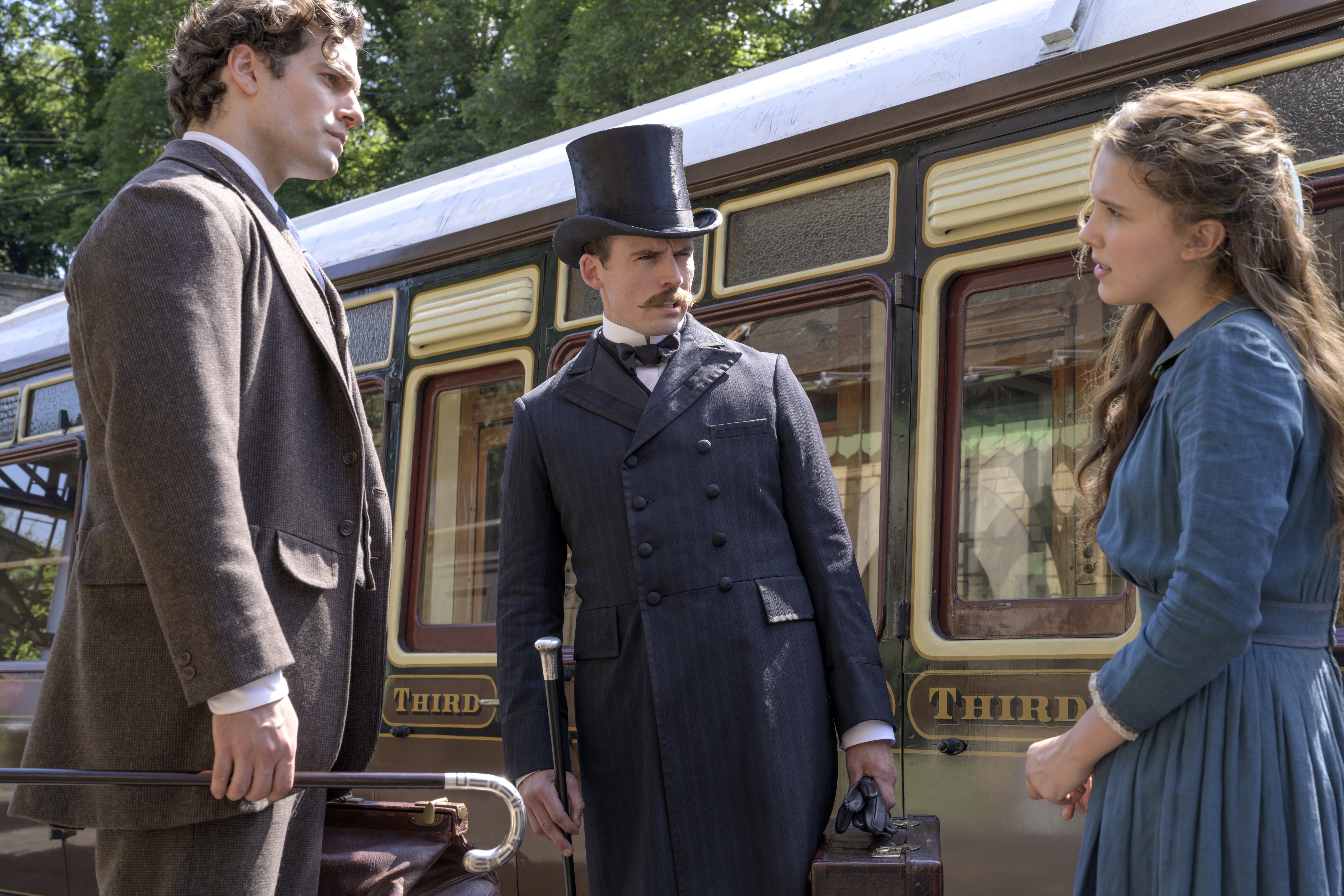 But for the most part, Enola Holmes sticks to its strengths. It’s an energetic caper flick with a strong empowerment message, delivered via a well written character and perfectly cast lead performer. Enola Holmes is the first star vehicle for Millie Bobby Brown, and it’s a perfect match of a capable star and the right material. Brown is intellectually, comedically, dramatically, and physically believable as a member of one of the most notable and widely adapted literary families. A lot of Enola’s inner monologue and reasoned deductions about her concurrent, interlocked cases is delivered via direct address to the camera, and instead of sounding like a book come to life, there’s a friendly, jovial, and appropriately sarcastic tone being adopted by Brown that treats the viewer like an equal in the adventure and not like an interloper that needs to be left behind. Think Ferris Bueller if he was a far less selfish, female, British sleuth, and you’ll get the tone Brown is striking with her performance.

It’s also a smart move – especially when building a franchise – to make sure that the hero doesn’t arrive fully formed with little room for future growth. While Brown still portrays Enola as someone smarter than most of the adults around her, there are plenty of moments where the young actress goes to both grand and subtle lengths to show blind spots in her training as a fighter, detective, and master of disguise. None of these moments are ever staged with the intent to devolve into slapstick for easy laughs, but rather as lightly embarrassing and frequently teachable moments. Brown’s performance knows precisely when to dial up or scale back the character’s inherent eagerness without betraying Enola’s impassioned quest for answers and personal independence.

Enola Holmes is the first feature film from television veteran Harry Bradbeer (Fleabag), and while the pacing could be a little quicker and some of the action sequences a bit more elaborate and assured, the director doesn’t try to turn the story into something overly hip and cynical. Outside of the obvious themes, Bradbeer doesn’t try to force any sort of postmodern irony onto the story. Bradbeer is aided nicely in his efforts by splendid, opulent production and costume design that make Enola Holmes feel less like a young adult movie and more like a fully realized period piece.

The only time Enola Holmes wavers in entertainment value comes as Bradbeer and Thorne are heading into their climax, offering a lengthy (but admittedly reasoned) aside that dumps a bucket of ice water onto the story just as it should be ramping up in excitement and intensity. It only serves to make an obvious layer already inherent in the story all the more pronounced and telegraphed without adding much in the way of fun, but all is forgiven pretty easily in the end. Through the clever breadcrumb trail of clues strewn about the story, Enola Holmes succeeds in great part thanks to a mystery that’s both hard to solve and still makes sense without being unnecessarily convoluted.

When making a mystery, the reveal is half the battle, and the one in Enola Holmes is assuredly worth audience investment. The other half of the film’s success rests largely on the shoulders of its young star, and Brown is more than up to the challenge. Unlike most wannabe blockbusters that are fun in the moment and forgettable upon leaving the theatre or switching the channel, I keep thinking about moments in Enola Holmes that made me smile, which I will take as a pretty good sign that this is a franchise worth continuing.