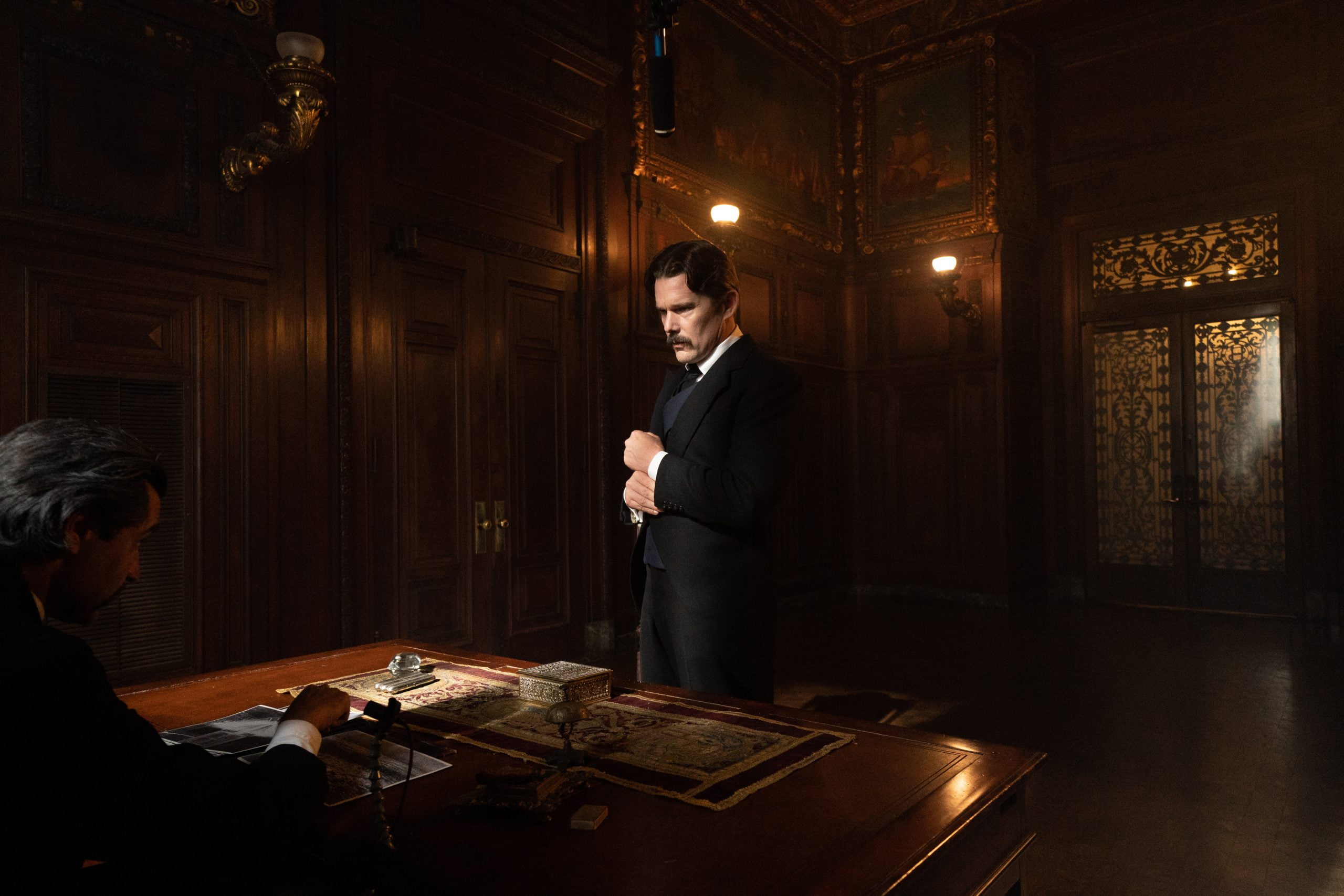 A playfully and creatively confounding upending of biopic conventions, writer-director Michael Almereyda’s Tesla is a keen reflection on the life of the misunderstood and historically underrated luminary it seeks to cheekily document. It’s an eccentric work about an eccentric personality. It won’t be what everyone wants, but much like Almereyda’s subject, Tesla is exactly what it wants to be. It’s a dryly humorous and sympathetic ode to ingenuity that also functions as a prominent middle finger to those who demand their films about historical geniuses to be respectfully stoic. Tesla is a period piece that daringly mixes genre trappings with punk rock sensibilities, making it the most refreshing film of its kind since Sofia Coppola’s equally divisive Marie Antoinette.

Ethan Hawke stars as Serbian born inventor and energy pioneer Nikola Tesla. Best known in the history books as the man who “lost” to Thomas Edison (played here by Kyle MacLachlan) in the energy race, Tesla, and his little known status as the father of alternating current technologies, has been relegated to the sidelines of history. It doesn’t take much pulling back of the curtain to realize that Tesla was moderately successful despite financing woes and taking some terrible advice. Despite being a victim of circumstance time and again, Tesla rubbed elbows with some of history’s greatest minds and financiers, making his a story worth telling and preserving.

There’s something purposefully sarcastic in the way Almereyda relays Tesla’s story to the viewer. Stylish, gorgeously shot visuals (captured with golden and shimmering sheens by master cinematographer Sean Price Williams) bounce back and forth between standard period movie trappings, old school epics (replete with painted backdrops), surrealism, and B-movie silliness. In a bid to marry the visuals to his atypical storytelling techniques, Almereyda includes a postmodern bit of narration, delivered to the audience via direct address by Eve Hewson, who’s ostensibly in-character the entire time as Anne Morgan, daughter of financial titan J.P. Morgan (Donnie Keshawarz) and Tesla’s closest, most consistent confidant. Tesla is packed with anachronistic asides and unexpectedly quirky moments that come out of seemingly nowhere to break up any potential tedium: people moving furniture during an important meeting, Nikola being stalked by a zealous violinist, Hewson’s narration flat out telling viewers to Google the names of famous people being brought up in conversation. The tone of Tesla is somewhere between a history lesson and fan fiction, and while I’m sure it will confuse just as many as it delights, I have to say that it was a risk that paid off for me. 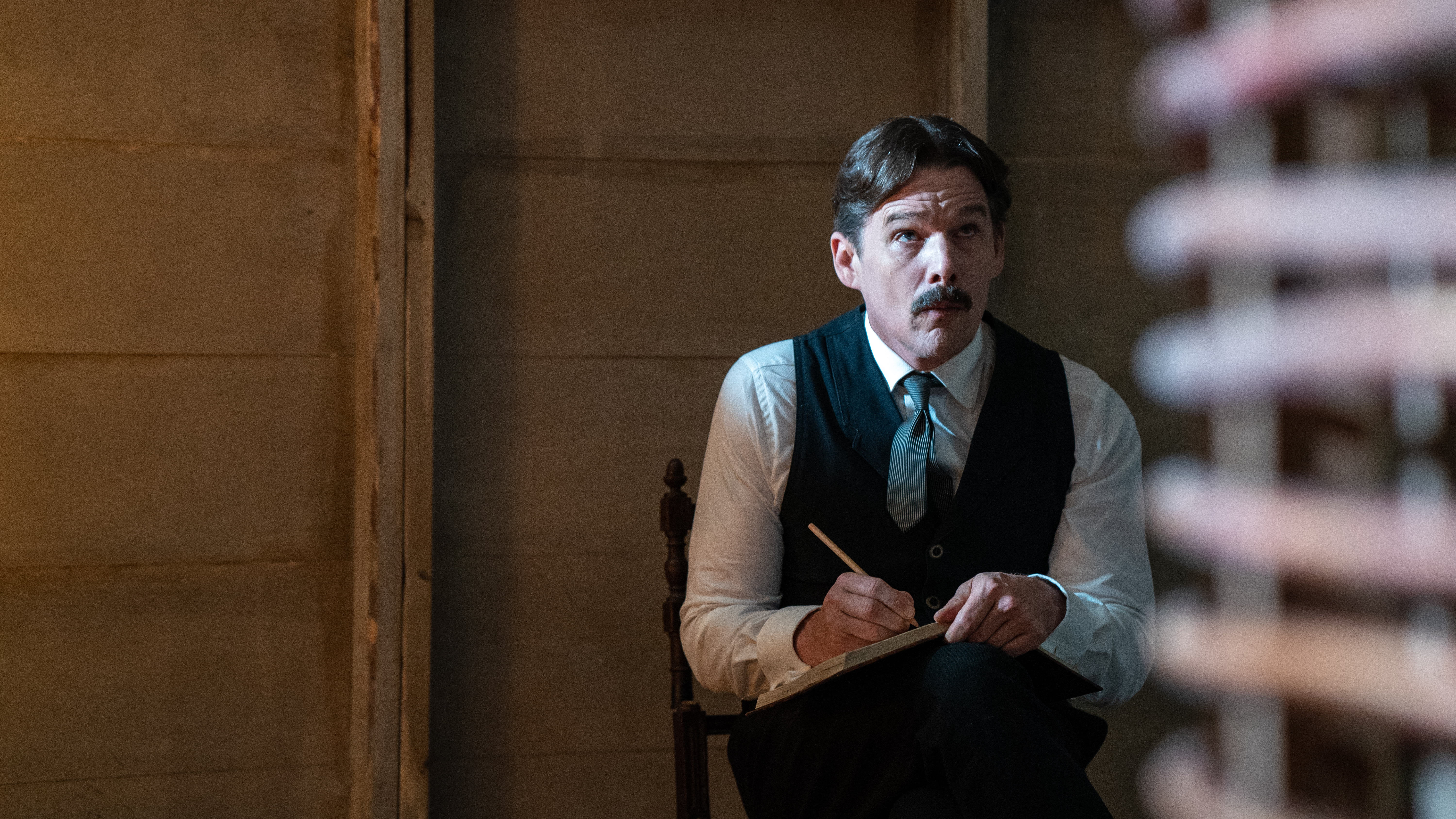 Those familiar with some of Almereyda’s previous works (Experimenter, Marjorie Prime, his modernist take on Hamlet, which also starred Hawke and MacLachlan) will already know not to expect anything straightforward or standard from the filmmaker. Almereyda, like Tesla, is an underrated talent, and there’s a sense from the way the writer-director has structured his story that he’s very sympathetic towards and understanding of his subject. Tesla is chock full of scenes where a man ahead of his time – one who isn’t a great industrialist, capitalist, or idealist – struggles to get his worthy inventions noticed. Tesla and Almereyda are kindred spirits operating on the margins of their chosen industries, with neither particularly afraid of alienating the establishment. Almereyda has slyly chosen to skirt some of the facts and fine details (often playfully noted by Hewson’s narration whenever the story deviates from the norm), and in the process offers the sort of story to which every frustrated creative type or scientist who hasn’t sold their soul can relate.

Hawke is a solid actor (who, like Tesla and Almereyda, is arguably underrated and influential), but he isn’t the first name that springs to mind when one thinks of light comedy or character work. Tesla allows Hawke to stretch some of those little used acting muscles to deliver one of his most memorable performances here. It’s a performance that goes in reverse, with the character starting as a strong, intelligent pioneer of the industrial era, eventually giving way to a cracking, breaking man who starts to take on an almost alien-like tone as he grows increasingly desperate to realize his visions. It’s a performance as unique and eccentric as the film built around it. Hawke also gets ample support from a delightful turn by Hewson – who functions as the fire to Tesla’s ice – and MacLachlan, who deftly balances buffoonery and corporate menace as the chief antagonist.

Almereyda’s Tesla isn’t purporting to be a self-serious, single volume retelling of its subject’s life. Instead, it wants the viewer to know what Nikola Tesla stood for rather than only for what he accomplished. Since Tesla was written off by many in his time as a failure, this film does a fine job of refuting his lowly place as a historical footnote (and it certainly does a better job than the recently released, more conventional, and colossally boring biopic The Current War did). Tesla is a fleet-footed and endearing look at the creative process. For something with more word for word accuracy, please consult your local library.

Tesla is available in Canada on VOD, DVD, and Blu-Ray starting on Tuesday, September 21, 2020.