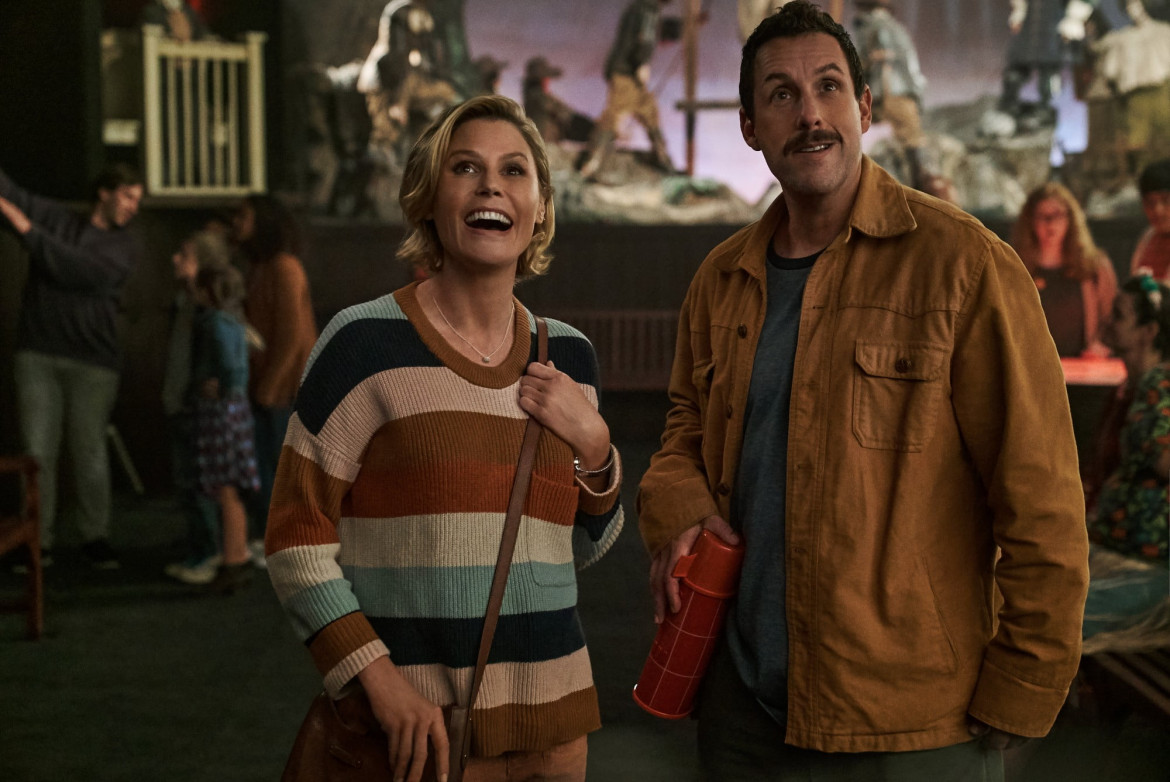 Hear me out on this: Hubie Halloween, the latest Netflix comedy starring Adam Sandler, is a pretty fun time.

Granted, the critical bar for the comedies starring and produced by Sandler (especially the ones made in conjunction with his lucrative Netflix contract) is set so low that many outside his loyal fanbase wouldn’t go near something like Hubie Halloween. Personally, I grew up on Sandler’s earlier work, and I still have a soft spot for the likes of Billy Madison, Happy Gilmore, The Wedding Singer, and even Little Nicky (which is actually underrated, and I won’t hear anything to the contrary). Whether you’re a fan of Sandler’s, you find him a hit-or-miss talent, or you can’t stand any of his comedies, Hubie Halloween offers more of the same regardless of one’s opinion, and that’s kinda okay.

I would imagine that many in my age bracket have children that are old enough to be introduced to Sandler’s work by their parents. Hubie Halloween is a perfect entry point for the young or somehow inexplicably uninitiated, and it’s Sandler’s most satisfying comedy since his mid-to-late 90s heyday. It’s a silly, crude, gleefully outlandish romp based around a ridiculous character played to the hilt by someone who has earned the right to be called a comedic legend, regardless of whatever his legions of detractors have to say about his career choices. Is it a masterpiece on the level of Uncut Gems? Absolutely not, but in a year as emotionally and socially cataclysmic as 2020, Hubie Halloween is precisely the comfort food I needed, and I happily recommend it without regret.

Picked on for most of his life by local bullies, the paranoid, but irrepressibly positive Hubie Dubois (Sandler) has appointed himself the unofficial “Halloween safety volunteer” for the town of Salem, Massachusetts. Hubie loves Halloween, but wants everyone to celebrate it as safely as possible. His methods are somewhat over-the-top, pushy, and completely ineffective, but Hubie’s motivated by love and respect for everyone around him. His boundless love and enthusiasm for safety makes him an easy mark for tormentors of any age, but this Halloween, Hubie’s concerns become valid thanks to a rash of missing people and an escaped patient from the local asylum.

Hubie Halloween boasts a solid premise for a holiday flick, and as much as it sounds like faint praise, it’s certainly in the same league as fall favourites Hocus Pocus and Ernest Scared Stupid. It’s the kind of thing families might put on when they want a blend of scares and laughs. Although there’s a handful of chuckle worthy jump scares and some unlikely visual homages to Halloween (both the old one and the new one), frequent Sandler vehicle director Steve Brill (Mr. Deeds, The Do-Over) keeps things light as possible. The script from Sandler and Tim Herilhy (who worked on the actor’s early successes that Hubie Halloween is trying to emulate) sticks to its strengths: sight gags (including some great digs at the ubiquitous nature of some popular costumes), non sequiturs, snappy put-downs, and colourful characters. Hubie Halloween follows a tried and true formula for a Sandler film: take a socially maladjusted outcast and make them the hero by putting them into opposition with a bunch of assholes. It worked then, and it works arguably better now that Sandler has evolved his craft a bit. 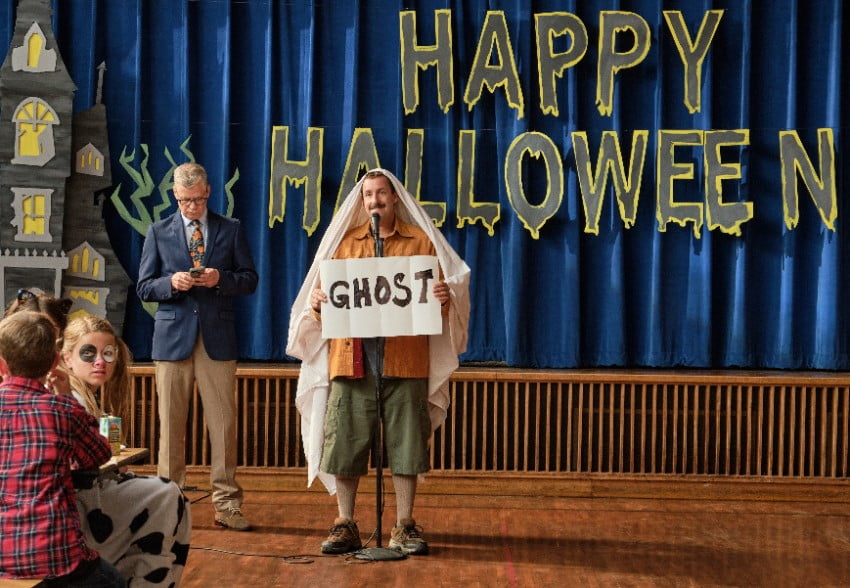 While Hubie Halloween isn’t a stretch for Sandler, and no one would call a movie with this many piss, poop, puke, and fart jokes “mature,” it’s a great example of why people watch his comedies in the first place. Much like Happy Gilmore or Little Nicky, Hubie Halloween is built around a character with a big personality and noble goals that viewers can gradually start to get behind. With a grumbling monotone, a ridiculous moustache, and his trusty “swiss army thermos,” Hubie looks and sounds like a goof, but the character is so pure of heart that it’s easy to feel for the guy. Although his methods are suspect to the point of annoyance, it’s clear to everyone watching that Hubie deserves better than he gets, making this a great example of another age old plot: a person who was constantly told they were wrong is proven to be right.

If there’s a major downside to Hubie Halloween outside of its familiar storyline and structure, it’s one that has hamstrung many of Sandler’s recent efforts. The charitable and friendly Sandler often goes out of his way to include supporting roles and cameos for a good deal of his closest friends and collaborators, and the results don’t always work, with Hubie Halloween suffering from a considerable amount of bloat for something this featherweight. Hubie Halloween also directly references other previous Sandler films, suggesting that the actor is finally one step further in expanding his own cinematic universe, which is either a great idea or a threat depending on how you choose to view it.

The “cavalcade of stars” detracts from the main storyline involving Hubie’s lifelong crush on the most popular girl from school (Julie Bowen, teaming with Sandler for the first time since Happy Gilmore), his dealings with her ex-husband – the mulleted and perpetually chief of police (Kevin James) – and a bunch of stuff involving various kids and local teens. Hubie Halloween has to keep starting and stopping its story so the protagonist can interact with the kind, but creepy guy who just moved in next door (Steve Buscemi), or get berated by a local blowhard (Ray Liotta) and a husband and wife team of condescending jerks (Tim Meadows and Maya Rudolph). While some of the comedic performances given here are great (especially Meadows, Rudolph, and June Squibb, who plays Miss Dubois, a woman with a penchant for wearing T-shirts emblazoned with racy jokes she doesn’t understand), Hubie Halloween doesn’t build enough momentum to propel the “who’s the killer” mystery at the heart of the story. There’s far too much going on here, and it seems solely to service Sandler’s desire to help his friends pick up easy paychecks while appealing to a younger audience. It’s a lot to graft onto an outlandish plot that barely holds together.

What wins the day here is the film’s unexpected wealthy of humanity, positivity, and good will. While Hubie gets pushed around a lot and is often the butt of every joke, the film makes it known that the character doesn’t deserve such scorn and hatred. In a nifty touch, the film also subverts the audience’s expectation that any revenge against Hubie’s bullies will be satisfying. It’s a movie that wants viewers to have the best time possible, and the overall positivity of the project and its hero make it downright charming in its best moments. I’m absolutely grading on a curve here, but I wouldn’t say that Hubie Halloween is better than it has any right to be. I’m just saying that this is the best case scenario for a Sandler comedy.

I’ll be sure to turn in my film critic gun and badge at the door on my way out.

Hubie Halloween is now available to stream on Netflix.