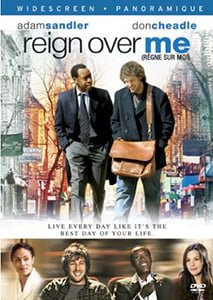 Reign Over Me
Adam Sandler and Don Cheadle star in this sweet, dramatic tale of two college friends trying to reconnect after years apart. In the intervening years a lot has changed however. While Alan, played by Cheadle, is living the life of the family man, Charlie, played by Sandler, has become an utter recluse after his entire family died when their plane crashed during 9/11. On the bright side the film is touching, smart, and offers some engaging performances from nearly the entire cast. Reign Over Me is unfortunately a very slow film, and feels a little tedious when it strays too far from the emotional drama.

28 Weeks Later
In 2003, 28 Days Later… was a smash hit horror film that told the tale of a zombie-like outbreak that threatened to destroy the United Kingdom. The sequel, 28 Weeks Later, follows the original concept closely, but of course doesn’t feature much in the way of original cast members since most of them died in the first film. This time around Britain is trying to rebuild after the original “infected” have all died off, but, and don’t be too surprised, not everything works out and the survivors have to once again, well… survive. Surprisingly, the critics have been quite positive about this one, with Lisa Schwarzbaum of Entertainment Weekly commenting, “28 Weeks Later excels at creating a keen, creepy sense of a civilization stopped dead in its tracks.”

Surf’s Up
Surfing penguins test their skills in this new animated film starring Jeff Bridges, Zooey Deschanel, Jon Heder, and Shia LaBeouf. Told like a documentary, or maybe reality show, the film follows Cody, voiced by LaBeouf, as he tries to win the surfing honour of being named the “Big Z’. Cody wipes out though, and it’s only thanks to Geek, voiced by Bridges, that he can carry on and try to win the title again. The movie features stunning visuals, and garnered numerous positive reviews when it was on-screen earlier this summer. As Roger Ebert put it, “The originality of the documentary format coupled with the splendid CGI effects qualifies Surf’s Up as not just another penguin movie.”

Evan Almighty
This week’s apparent DVD dud stars Steve Carell as Evan Baxter, the character you might recall from Jim Carrey’s Bruce Almighty. As with the previous film Carell now finds himself, at the behest of Morgan Freeman as God, taking on a biblical role to redeem himself and prove something at the same time. Marketed widely as a much more family-oriented take on the original concept, Evan Almighty has been soundly mocked by critics far and wide, but few summed it up as well as Peter Travers of Rolling Stone: “The shamelessly juvenile, pseudo-religious, mock-sincere Evan Almighty is the most expensive Hollywood comedy ever made. Problem? It’s not that funny.”

Rise: Blood Hunter
Finally, you might want to check out the Lucy Liu vampire film, Rise, where Liu plays a reporter who wakes up undead one day and isn’t very happy about it. Actually, strike that, you probably don’t want to check it out. There isn’t much to recommend and writer/director Sebastian Gutierrez is probably most famous for writing… wait for it… Snakes on a Plane.

With Halloween only weeks away there are also lots of horror titles out this week, including the Indie horror/comedy Black Sheep, about a genetically modified batch of killer sheep that terrorize New Zealand, and the 80s horror classic Poltergeist gets fixed up and released in a brand new special edition package. Not to mention, for TV on DVD, you can pick up the complete Stargate: SG-1 package which includes seasons 1 to 10.