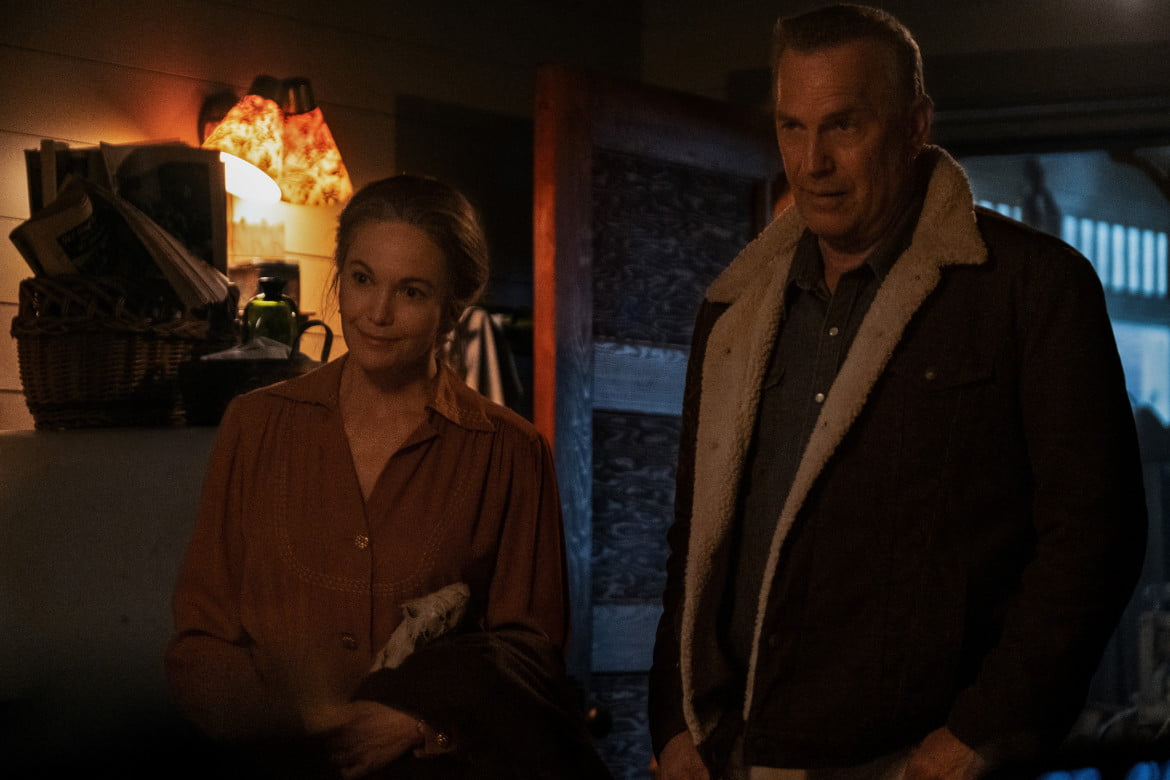 Across the past decade, plenty of revenge thrillers have done both their best and worst to cash in on the success of the Taken franchise, but few have been as thoughtful and genuinely unsettling as Let Him Go. A slow burning, restrained, but not exactly subtle character piece, Let Him Go is the type of film that wants to come by its inevitably bloody retribution honestly and with a keen sense of psychology. On one hand, Let Him Go is a mostly predictable yarn about a family member doing everything in their power to rescue an endangered loved one, and it works just fine on that level if one doesn’t want to read too much into things. On the other, Let Him Go is so exceptionally acted, paced, written, and photographed that the whole thing feels assured and admirable.

Set sometime in the early 1960s, Let Him Go is the story of Margaret and George Blacklodge (Diane Lane and Kevin Costner), a pair of retirees living on a ranch in Montana. Their lives are permanently altered after the death of their adult son in a freak horseriding accident. Their widowed daughter-in-law (Kayli Carter) and mother to their grandson (played by twins Bram and Otto Hornung) gets remarried one year after the accident, to shifty and shady looking Donnie Weboy (Will Brittain). While out shopping for groceries one day, Margaret sees Donnie slapping his new wife and son around in the parking lot. When Margaret goes to check in and confront Donnie, she finds that they’ve packed up and suddenly left town. Fearing the worst for her grandson, she’s determined to track Donnie down in North Dakota, where he’s presumably staying with family. George, a former sheriff, thinks Margaret’s idea is dangerous and irresponsible, but he also knows he can’t talk his wife out of it.

Writer-director Thomas Bezucha – adapting a novel by Larry Watson – spends almost the entire first half of Let Him Go building up the relationship between George and Margaret. The plot is set into motion rather early on, but Bezucha (in a huge turn away from previous, fluffier films like The Family Stone and Monte Carlo) isn’t in a hurry to get to the showier conflict. Instead, Let Him Go often outlines its core marital relationship through a lot of visual, nearly wordless storytelling that allows the actors to deliver grace notes the script and story might otherwise ignore. Margaret is established as a strong, capable, unstoppable, and still rather affable woman; the type of person who will bake a bundt cake to eat en route to an argumentative, emotionally charged confrontation. George is a man of few words; someone who seems to know and understand the score in any given situation. Even when George knows something is about to go bad, he places faith in his wife and trusts his own abilities. Both have a specific sort of finesse that goes beyond making them into a “good cop/bad cop” team, with each having a specific set of conversational and motivating skills that nicely compliment their better halves.

The casting of Lane and Costner is dead on perfect for the material, with both actors all but erasing any memory of the fact that they previously played a married couple in Man of Steel. Granted, they’re both given a lot more to do and play with in Let Him Go, but it’s nice to see their pairing live up to its fullest potential. Lane and Costner have an impressive shorthand together and the ability to convey complex emotions and shared thoughts without speaking a single line of dialogue. They’re more than capable of relaying the gravity of the situation at hand, while even finding moments of subtle levity that makes the viewer like spending time with them. Bezucha wisely luxuriates in their performances, allowing his actors to dictate the measured pace, while Canadian cinematographer Guy Godfree (Maudie, Giant Little Ones) gorgeously captures them under vast midwestern skies, plains, and mountains (making great use of the film’s Alberta shooting locations), and Michael Giacchino’s memorable score finds the perfect notes to set the mood throughout. Bezucha seems to know how lucky he is having such capable actors giving their all to a project that sounds formulaic and somewhat disreputable on paper, and in turn he’s responding in kind by delivering the best motion picture built around them. Revenge thrillers are almost never this polished, visually captivating, or expertly mounted. 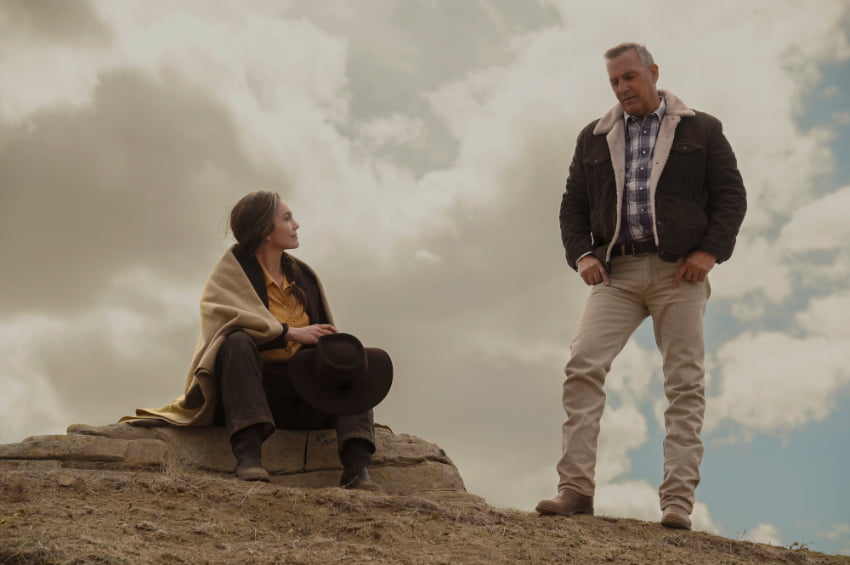 Although Let Him Go is built around marital and familial bonds, it’s easy to see why Lane receives top billing here. Perpetually one of the most underrated and underutilized performers of her or any other generation, Lane’s performance as Margaret is up there with some of her best work. Lane takes a character that could’ve easily read as just another “housewife pushed too far and in over her head” cliche and turns Margaret into a likable, emotionally complex, and proactive heroine. It’s often hard to tell where Margaret’s concern for her grandson ends and the unprocessed feelings about her son’s death begin. For his part, Costner, delivering one of his most delicate performances, largely stays out of her way, as per the story’s wishes. It’s Costner’s most generous performance, and he’s keenly aware that Let Him Go is the story of Margaret’s quest, not George’s. (He’s also already had his own Taken clone, and the less said about that, the better.)

The list of great performances in Let Him Go only grows once Margaret and George hit the road, including a nice turn from Booboo Stewart as a skittish residential school runaway who reluctantly helps the couple on their journey. The heroes of Let Him Go are put into direct opposition with the influential, hard nosed, insular, unrepentantly rude and old school Weboy clan, led by matriarch Blanche, played by Lesley Manville in an absolutely bone chilling performance, and Donnie’s psychopathic uncle, Bill (Jeffrey Donovan, an underrated character actor who uses his leading man good looks to his advantage). Blanche doesn’t want any of the Weboy clan to ever be coddled, and she refuses to release her grandson into Margaret’s custody. Blanche thinks her Donnie didn’t do anything wrong, and the family has a local legacy that has built them powerful connections. Blanche is the sort of confident, cocky villain that knows she can get away with anything, and the slowly building tension of Let Him Go explodes the second she appears on screen. Manville proves to be a perfect foil for Lane, making the female-led dynamic of Bezucha’s film all the more intriguing, with a suppertime showdown between the warring families emerging as one of the best scenes in any film this year thanks to the performances of all involved parties.

That sudden escalation does mean that the second half of Let Him Go feels a lot more untethered and crowd-goosing than the first half, but Bezucha’s wise decision to build his characters fully before throwing them into harm’s way makes one care about the eventual payoff. When things get violent (and they do, often shockingly so), the audience still has reason enough to care and buy into the tonal pivot. It’s an approach most often utilized in horror films rather than melodramas or revenge thrillers, but Let Him Go ultimately earns the right to venture into darker, nastier, and morally ambiguous territory.

What doesn’t work well about Let Him Go is the often clunky subtext behind the title. Every now and then, Bezucha’s momentum will stop dead in its tracks to remind the audience that Let Him Go is a film about accepting loss and moving forward, with the title itself taking on multiple, different and easily recognizable meanings along the way. While it’s an admirable message that most revenge thrillers don’t care enough to talk about, Bezucha handles it with a heavy hand that isn’t evident in the rest of the film. These moments of obvious symbolism (which happen mostly in unnecessary flashbacks) are akin to someone stopping things dead in their tracks every ten to fifteen minutes to tell the viewer things they’ve already figured out on their own. Still, it’s not egregious enough to detract from the film as a whole. When Let Him Go sticks to what it does best and lets its actors and sense of setting tell the story, it’s a highly watchable, if admittedly straightforward effort.

Let Him Go opens in select cinemas on Friday, November 6, 2020. If seeing a film in theatres, please take all necessary precautions. Practice social distancing, wear a mask, and stay home if feeling unwell. 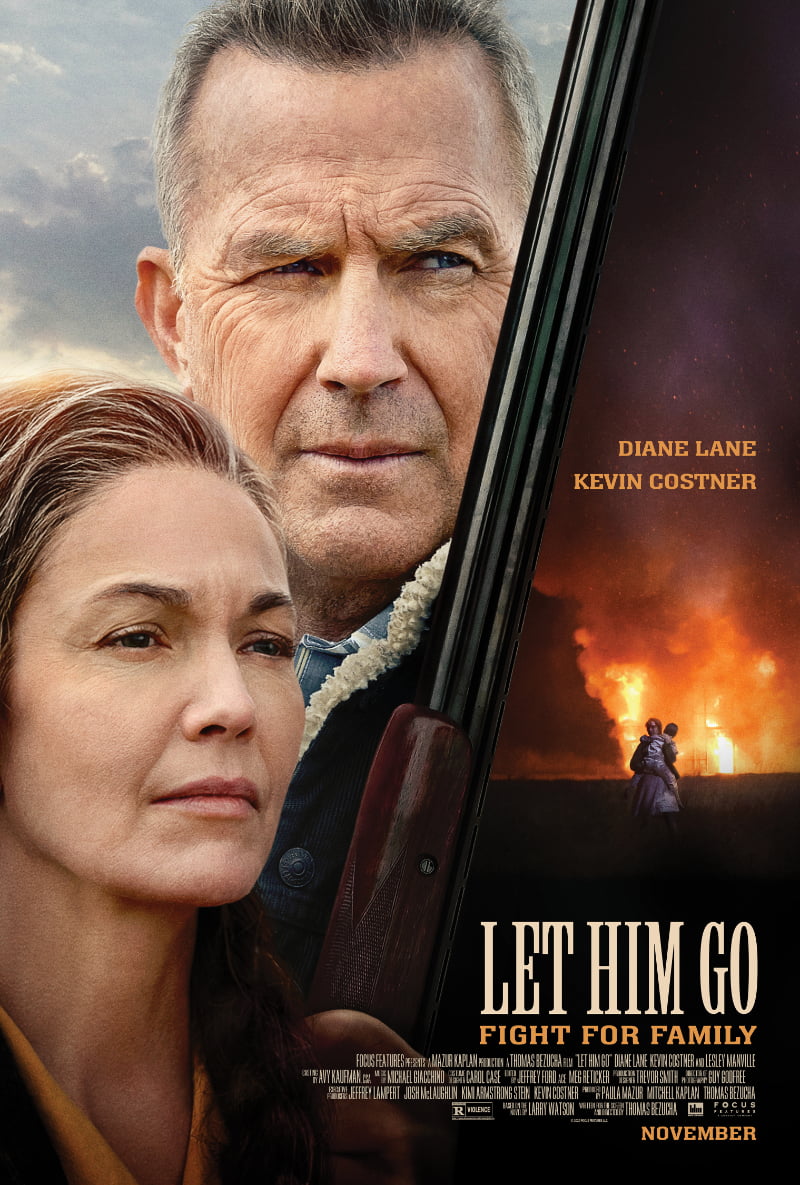