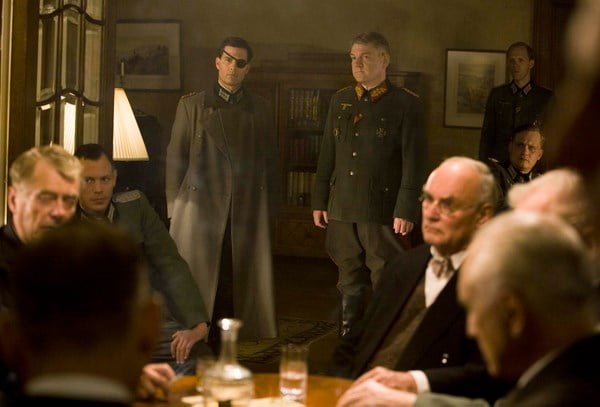 Out this week, forget about Tom Cruise‘s personal life and check him out in the World War II thriller, Valkyrie. Also available, Kevin James stars in Paul Blart: Mall Cop, there’s the campy horror remake My Bloody Valentine 3D, and best of all I take a look at season one of HBO’s vampire series, True Blood.

Valkyrie
Actor and producer Tom Cruise pulled out all the stops when Valkyrie was first headed to theatres, it was just a little difficult to measure exactly what was getting more attention, the film or the star. If you ignore the somewhat ridiculous aura that seems to surround Cruise’s personal life though, the truth is that he is still a great actor, and a film like Valkyrie proves that perfectly.

Following events during World War II, when a group of German soldiers tried to assassinate and take down Adolf Hitler and his Nazi-run government, Valkyrie is a dramatic thriller that was directed by action junkie and X-Men phenom Bryan Singer.

With its compelling cast, which includes Kenneth Branagh, Bill Nighy, and Tom Wilkinson, the film is an accurate reinterpretation of Count Claus von Stauffenberg’s attempts to free Germany from the dictator’s grasp, with Cruise in that primary role.

Not surprisingly, Singer directs the story with precision, wringing every ounce of tension from the script, and giving the actors every opportunity to bring their characters, and these historical figures, to life. Singer also keeps the story in focus, offering up brief action sequences, but otherwise making the story and the plot all-important, which is essentially what makes the film work so well.

Few of the performances would ever be called any of these actor’s best roles, but considering the calibre of the cast, I think the blame for that must fall on the director and the writers.

Paul Blart: Mall Cop
As the title suggests, James plays mall security guard Paul Blart, a wannabe action hero who really hates crime and is madly in love with Brandi, a sweet sales associate, played by Anna Faris. So when Santa’s helpers go on a crime spree in the mall, and then take Brandi hostage, it’s up to this one security guard to save the day when the cops can’t help.

Think Die Hard, but set in a mall with a loser pulling lame stunts to catch the bad guys. And like Blart would say, “safety never takes a holiday,” which is exactly the kind of vapid scripting this film is all about, and I’m not only talking about the dialogue.

For instance, why are all the criminals super athletic gymnasts, riding bikes, sporting tattoos, and jumping around like ninjas? I suppose that in the PG-13 world this film was obviously intended, nothing is funnier than an overweight mall cop and aerobic bad guys, but it is just one of the many silly elements in this jumbled film.

For an average weekend where you just want your teenagers to watch a movie and stop bugging you, maybe Paul Blart can do the job, but I wouldn’t recommend the film to anyone else, except for maybe a Kevin James fan.

My Bloody Valentine 3D
According to the trailer for My Bloody Valentine 3D, “Nothing says date movie, like a 3D ride to Hell.” While I’m not prepared to justify that claim, I have to admit, a slick horror film is a lot of fun, date or not, and this film is one of those good, old fashioned, bloody enjoyable movies.

Based on the 1981 horror classic of the same name, My Bloody Valentine 3D takes place in the small town of Harmony, where ten years ago a mine accident killed five people and left Harry Warden in a coma. A year later, Harry awoke and killed 22 people before he was taken down.

Now, the man responsible for the accident is back in Harmony, and so is a killer. Wearing a mining mask and wielding a pickaxe, the town can only wonder if the Harry is back for revenge, or what is really going on.

And yes, good news horror fans, you can watch it in 3D on the DVD and Blu-ray release.

True Blood: Season 1
Six Feet Under’s Alan Ball has created what I can only call the vampiric V (as in the alien television series) of our time. Maybe that’s not an entirely fair comparison, but there are similarities for this clever drama about modern day America where vampires have become part of society.

With the creation of a synthetic blood substitue called True Blood, the vampire population has started to come out of the shadows, and the result is a lot of changes from one edge of society to the other. Vampire blood becomes the latest illicit drug, people fear and persecute anyone thought to be a vampire, and of course, crimes spring up against warm-blooded humans, and the fanged alike.

Most of all though, the show takes a lot of pride in blurring the lines between sexuality and violence; life and death. It’s as much a thriller as it is a drama and a horror series, and although the series takes pride in some corny imagery and ideas, True Blood is a fantastic show.

Anna Paquin stars as a telepathic waitress in Louisiana, who meets and starts to fall in love with a vampire by the name of Bill, and played by Stephen Moyer. The show also stars Sam Trammell, Rutina Wesley, Ryan Kwanten and Lois Smith.

Included on the collection is six commentary tracks with the series creator and stars, plus a mockumentary, and fake ads. My hope would have been for some more exciting material, but the commentary tracks are pretty good, exploring a lot more behind-the-scenes information.