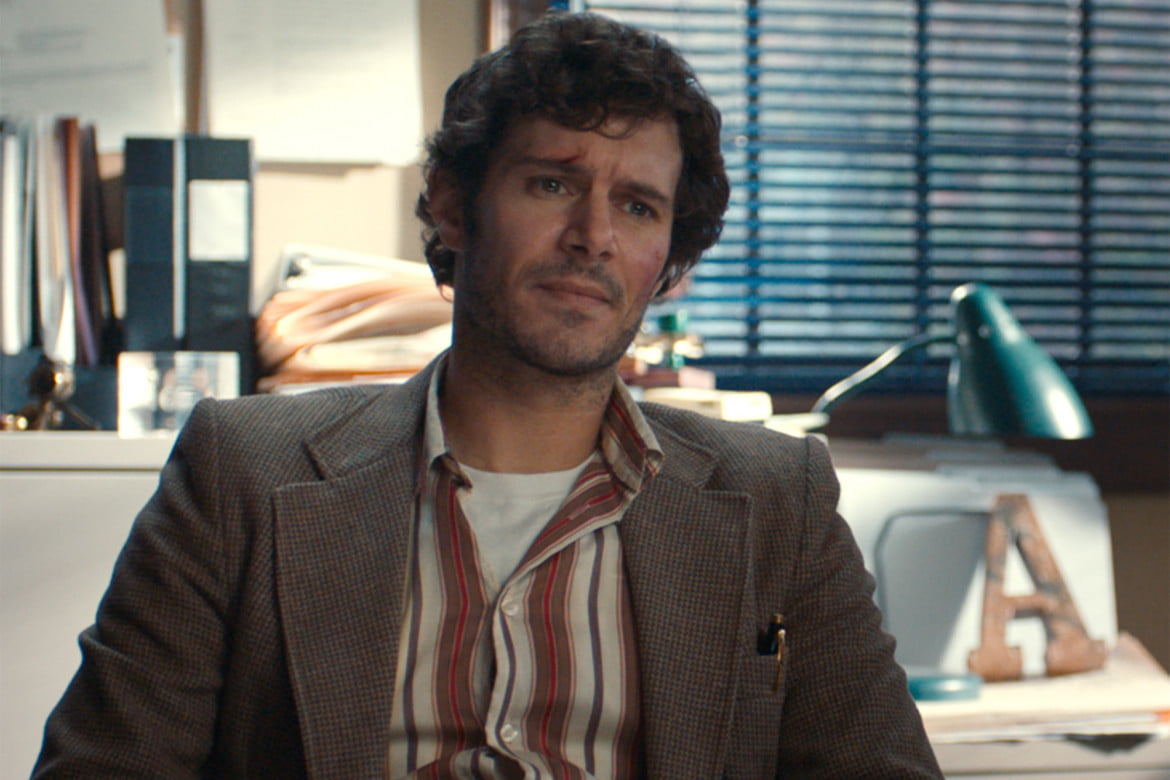 The unique and often rather dark Canadian comedy The Kid Detective is the best movie of its kind since Fletch. A cleverly written and performed bit of anti-nostalgia for anyone who grew up on the likes of Encyclopedia Brown, Nancy Drew, or Hardy Boys books, The Kid Detective is the rare example of a post-modern gumshoe thriller that has the ability to be both hilarious and genuinely unsettling at the same time. It’s a strong first feature from writer-director Evan Morgan that boasts a career best (and possibly defining) performance from leading man Adam Brody. The Kid Detective is hands down one of the best Canadian films of the year and one of 2020’s most welcome surprises. Even though 2020 hasn’t been kind to most films released this year, mark my words: The Kid Detective is destined for cult movie status, and rightfully so.

Private investigator Abe Applebaum (Brody) is a 32-year old burnout who never lived up to his fullest potential. In his tween years, Abe was all anyone could talk about in the small town of Willowbrook. Capable of solving mysteries great and small at only the age of twelve, Abe was a local legend. But after he wasn’t asked to consult on the biggest mystery in town history – the disappearance of the mayor’s daughter, who also happened to be Abe’s secretary – the young man began a downward spiral. He went from being the town hero to the town zero, with a piss poor attitude and drinking problem to show for all his efforts. Living the life of a complete slob, barely eking out a living with nickel and dime cases, and still leaning on his parents for assistance, Abe sees the potential to turn his luck around by taking on his first murder investigation. Local teen Caroline (Sophie Nélisse) contacts Abe to look into the death of her boyfriend: a quiet, well liked honours student with no enemies who was stabbed to death in an apparent frenzy.

The comparison to Encyclopedia Brown seems somewhat obvious throughout The Kid Detective. Morgan co-wrote fellow Canadian cult classic dark comedy The Dirties with Matt Johnson, who was reportedly in talks at one point to create a major studio adaptation of Encyclopedia Brown that ended up falling through. The Kid Detective feels exactly like the kind of loose adaptation a major studio would turn down for being too edgy and unmarketable. Unabashedly embracing its not-for-kids rating, The Kid Detective isn’t afraid to be foul mouthed or go to the sort of frightening places that kiddie material adaptations wouldn’t dream of going. It’s a film made for the kinds of adults who grew up on similar stories, but realize in hindsight their inherent silliness. How would one go from such low stakes cases, like figuring out who stole money from the school bake sale, to the unsolvable murder of a teenager who was stabbed seventeen times?

The Kid Detective answers that question with another question: what if the sleuth in question peaked as a teenager and hadn’t done anything of note since? Abe is the kind of grizzled detective who seemingly only takes cases out of obligation or a need for easy cash these days. He’s woefully unqualified to handle such a case, and he wouldn’t be able to track down a single lead without the help of Caroline, but ultimately The Kid Detective is a pleasingly off kilter redemption story in addition to being an intricately and intelligently crafted whodunit. In most films, it’s the lunkheaded jocks who peak early in life, stay in the same town, and quietly revel in their glory days found at the bottom of a bottle. Here, Morgan shows that smart people can fall into the same unwitting trap, doomed to wonder what life would’ve been like with a few more lucky breaks. 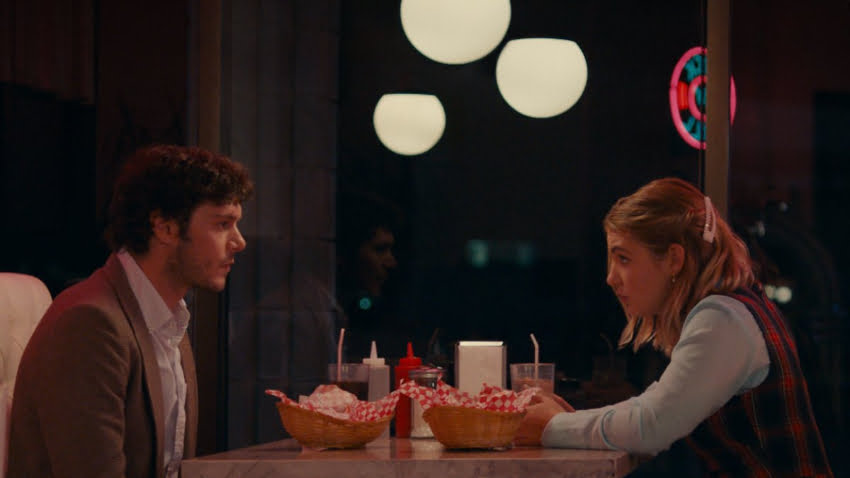 The Fletch comparison noted earlier also comes naturally and organically through Brody’s perfectly pitched leading performance. Abe is a complex character, with his intriguing layers being just as captivating as the mystery. Boasting a shabby appearance and some heavy “I really don’t want to be here” vibes (in a good way, not in a phoned in way), Brody conjures natural comparison to some of Chevy Chase’s smartassed, sarcastic early career performances, with just a dash of late period Bill Murray level bluntness and tired exasperation. Brody effortlessly plays a relatively smart guy who has believed his own bullshit for so long that it has left him a thoroughly depressed shell of his former self. Abe doesn’t crack jokes or put people down because he thinks it’s funny. He’s clearly doing it to keep from falling apart completely. Brody – a former teen TV star who never fully made the leap to big screen, leading man status – displays a perfect understanding of the core joke at the heart of The Kid Detective, so much so that it feels like the role he was born to play. If he wasn’t already somewhat of a name, it wouldn’t be out of line to say Brody’s work in The Kid Detective is a star making performance. He also boasts great chemistry with Nélisse – in a rare case where a comedy becomes funnier because both odd couple characters are playing things straight – and Sarah Sutherland, as Abe’s perpetually unimpressed, but low-key supportive goth secretary.

Morgan strikes a delicate, balanced, and reasoned tone throughout The Kid Detective that holds things together. The writer-director shows a genuine love for traditional mystery trappings: drugs, gangs, red herrings, unexpected, but inevitable connections to some of the hero’s past cases. The look and feel of The Kid Detective’s small town setting feels purposefully predictable, but lived in and never overly stylized. The cinematography from Michael Robert McLaughlin and score from Jay McCarrol (another frequent Matt Johnson collaborator) work nicely to make the film look and move like a 90s throwback vehicle without being cute or nostalgic. Morgan also makes plenty of room for inspired weirdness throughout, like a great punchline to a traditional seeming scene where the heroes are being tailed, a secret society of kids who like to spend time at school over the weekends, and a hilarious bit where the incognito detective gets trapped in a closet for an extended period of time. On a technical and structural level, everything about The Kid Detective works well, and it’s the rare example of film without a lacklustre or misguided scene.

Most mysteries are only as strong as their big reveal, and the one at the end of The Kid Detective is a doozy. While the trail of breadcrumbs and evidence followed by Abe isn’t too hard to keep up with, Morgan has crafted an ending that’s both hard to predict and something that makes the film and Brody’s leading performance more psychologically fascinating on a second viewing. It’s less about what happened, and more about what it all means to the parties involved. At a certain point and by necessity, The Kid Detective purposefully stops being fun, but it never ceases to be entertaining or surprisingly emotional, with Morgan building his film towards the rare example of an epilogue that actually enhances things rather than dragging without necessity. Although movies like Murder on the Orient Express and Knives Out have done a good job of making audiences excited in big screen investigative yarns again, The Kid Detective is equally exceptional at leaving viewers enthralled by a smaller scale, character based approach. Truth be told, I probably had more fun watching The Kid Detective than any other film I’ve seen this year, and that reveal is probably the biggest surprise of all. 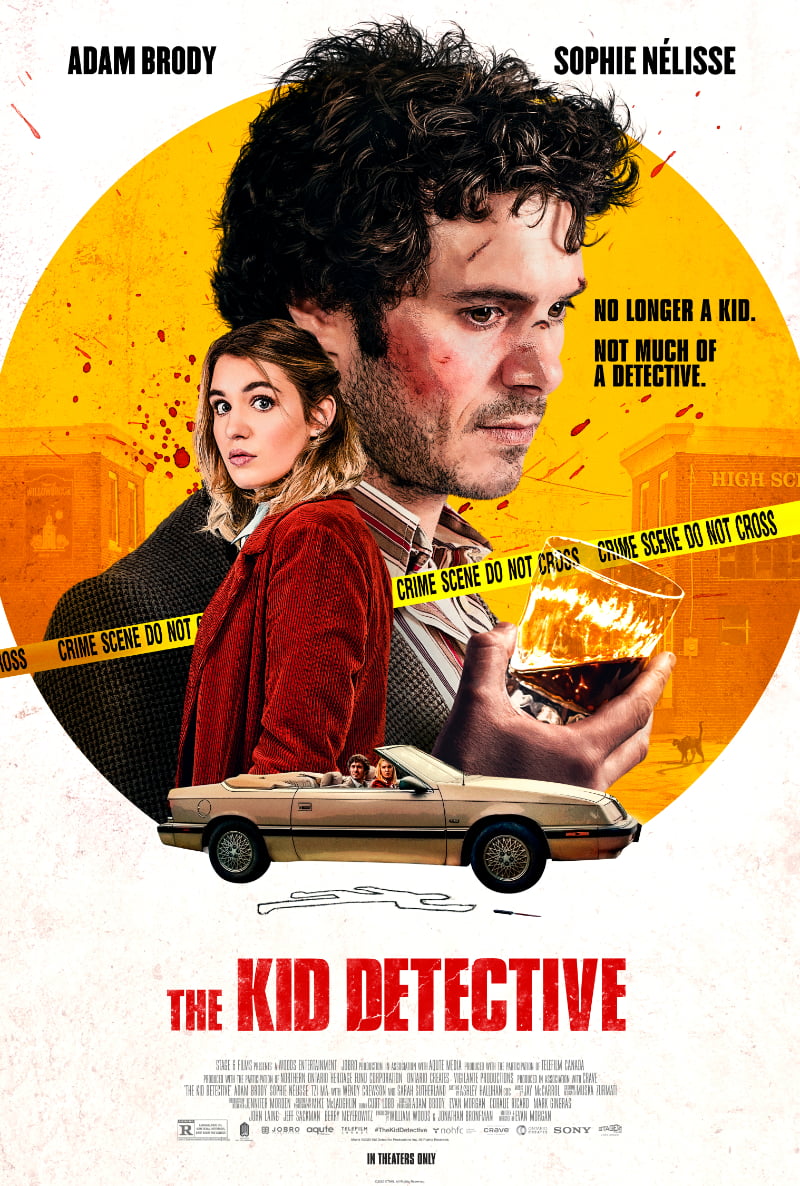 I’m surprised that you didn’t mention the most obvious (for me) influence on this film: The Big Lebowski. Both films feature an inept detective, a pothead protagonist who is less informed about the subject of his investigation than almost everyone else in town. A shabby shamus who shambles through the story being led around by the nose by the woman with an agenda. He’s a slacker who peaked 2 decades previously and happily retells his tales of old glory.
The story ultimately leads to the birth of a child, which turns out to be the real agenda/purpose of the exercise. Not to mention the aesthetic nods to sunshine noir and very dark humour.
The Kid Detective is actually much darker in tone, while TBL has a dirty dark underbelly that is only revealed by the most insightful investigation.

I should also mention that I was pleasantly surprised by TKD, It’s a film that held me from start to finish, and I wonder if it is secretly inviting me to dive deeper into the real life mystery at the bottom of The Big Lebowski.
It’s a good review of a better film, and I highly recommend it to any fan of film noir.