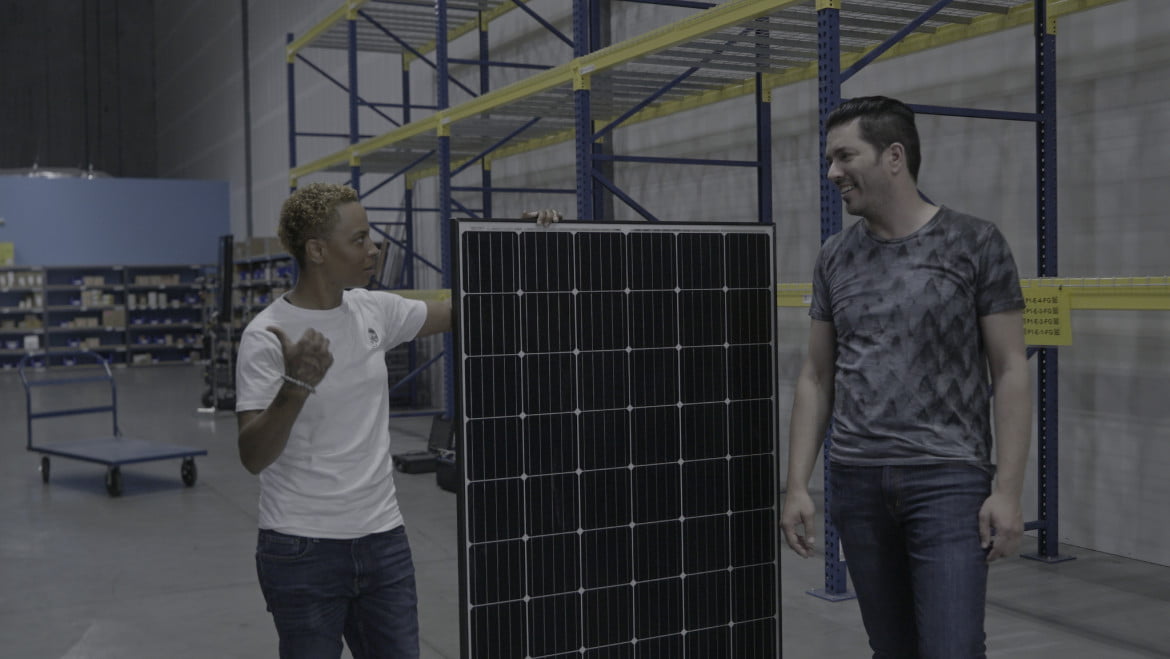 An uneven, but impassioned defense of renewable energy, Jonathan Scott’s Power Trip is a documentary made by someone who’s willing to defend what they believe in, but still hasn’t fully figured out quite how they wants to express their opinions. Specifically going to bat for solar energy and the people who want to harness the natural power of the sun so they can cut their cords from the aging, overburdened, unsustainable, and overpriced power grid, Jonathan Scott’s Power Trip is another advocacy documentary that has its heart and convictions in the right place, but a flighty, sometimes cloying mentality. Scott is trying very hard to win viewers over and – for both better and worse – it shows.

Canadian born celebrity contractor and one half of the famous and omnipresent Property Brothers, Jonathan Scott found out the hard way just how difficult it can be switching one’s home over to solar energy when he had a system of panels installed at his house in Nevada. Numerous states across America have passed laws dictating that solar users either have to continue paying into the grid or share the excess energy their panels produce without compensation or a rebate. Some states have passed legislation that goes even further, barring citizens from buying their power from third party vendors, which would include self-produced solar. Such measures have made an already costly home renovation upgrade exponentially less affordable, and Scott is keen to get to the heart of why big energy is so afraid of solar. The easily gleaned answer is that it all comes down to money and power players (both literal and financial) protecting their investments.

Jonathan Scott’s Power Trip (a title that almost gleefully invites any detractors to step up to the plate and defend their point of view) is little more than a standard “green energy is good” and “corporations are awful” bit of environmental advocacy, but thankfully there’s plenty to chew on here and some good points to be made. Scott and co-director Edward Osei-Gyimah’s film plays a lot like the counterpoint to the controversial and sloppy Michael Moore produced documentary Planet of the Humans from earlier in the year. Where Moore and director Jeff Gibbs’ film is all about “greenwashing” and the often ignored environmental impact green energy solutions can have, Jonathan Scott’s Power Trip is proudly waving a flag for solar and standing up for the rights of those who want to create their own power.

Right out of the gate, Scott tries to show how solar energy shouldn’t be a partisan issue by travelling to Georgia to talk to one of the movement’s most outspoken proponents: a woman who helped to found the politically far-right Tea Party. It’s a bold move that almost loses Scott’s target demographic early on, with Jonathan Scott’s Power Trip taking a somewhat uniquely Libertarian viewpoint. Outside of profiling the struggles faced by residents in his home state of Nevada and a similar situation unfolding in Florida (which have a lot of similarities, but vastly different outcomes), Scott travels across America in search of everyday people struggling to implement a power supply that’s costly up-front, but could save lots of money and lives in the long term.

In Georgia, Scott examines how an indefinitely delayed and hopelessly over budget nuclear power project has unfairly taxed consumers. In Kentucky, Scott sits down with coal industry workers who cling desperately onto their livelihoods despite the impact it has on their health and the environment, and proof that the solar energy sector a job creator. In rural communities that have been struggling since the economic downturn a decade ago, solar has provided a lifeline to farmers (one that can easily be seen by anyone who has taken a trip through such areas across Canada recently). Impoverished communities in the south have been trying to offset the impact coal dust has on the health of their populace, but they’re told a lot of the same anti-solar rhetoric that people in wealthier communities are facing, albeit with obviously graver consequences. Sure, there are regulatory bodies put in place for such matters, but they’re anything but fair and impartial, thanks to the immense lobbying power of these heavily leveraged and protected corporations. Scott lays bare the ways influential investors like the Koch brothers and Warren Buffet have sought to protect their money by upholding the monopolized, “old boys” system of power management, but also highlights a few green energy success stories here and there, particularly when examining how some urban areas have been offering “community solar” programs. 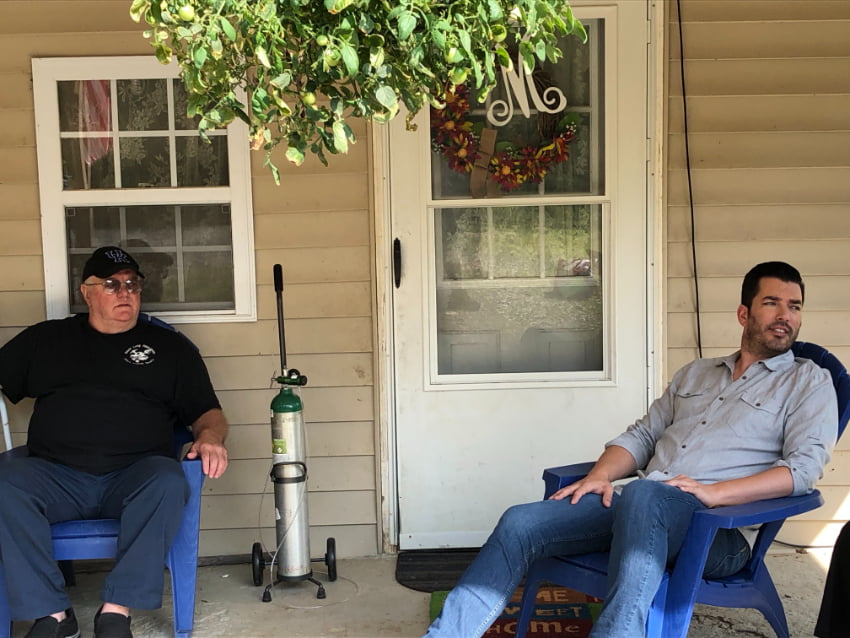 Scott’s desire to tout the benefits and expose misconceptions about solar energy isn’t tied expressly to the fact that he wants to save some money on power. When it’s revealed late in the film that Scott’s family has a personal tie to the coal industry, the personal nature of the crusade comes into larger context. But before that point, Jonathan Scott’s Power Trip feels rather aimless, with the film bouncing around a list of examples and arguments, struggling to find a way to tie them together with some degree of structure. Whenever Scott introduces a new thread to the documentary, segments often feel unfinished before moving onto the next related topic. Sometimes Scott comes back to these points, and sometimes he doesn’t. Everything here is in service of supporting Scott’s point, which is fine, but it’s very much what one might expect from a reality television host turned environmental pundit. The passion is there, but it’s also getting the better of him.

Not all of the structural problems in Jonathan Scott’s Power Trip are the fault of the filmmakers. Early on it becomes clear that solar regulation has become so inscrutable and heavily legislated that laws are almost designed to spin the heads of anyone even thinking of putting panels on their roof. Big energy thrives not only on their overloaded coffers, but also on scare tactics and even more insidious campaigns designed to make coal, natural gas, and other fossil fuels seem friendly and harmless. Scott has a lot to keep track of if he wants to make his case as emphatically as possible, and while certain viewers who already have a favourable view of green energy (myself included) will surely agree with the host’s statements, the topic and its wide array of ins and outs is almost better suited to a series of its own.

When it comes to talking about the cons behind solar energy (the prohibitively high cost of materials and installation, the admittedly dubious environmental impact that comes with building and trying to recycle panel components), Scott rattles off a list of negatives in a single scene that feels like it was put there out of a robotic, shrug-worthy sense of obligation, but the monotone delivery of such points isn’t the biggest issue here. The real problem is that Jonathan Scott’s Power Trip feels like it reaches a natural conclusion at that point, roughly an hour in. It sounds every bit like a final summation, but the interviews and personal stories found in the film’s final thirty minutes are some of the most profound and poignant, delivering stories that are both frustrating and uplifting. Here, Scott looks at how the power grid unfairly taxes racialized and indigenous communities the most, and delivers viewers with a proper cause for alarm and advocacy. The big problem is that this section – his most important and structurally sound – doesn’t feel fully tethered to the rest of the documentary. It almost exists as its own film, separate but equal to the rest of Jonathan Scott’s Power Trip, when it should feel better integrated into the whole.

Those who know Scott from his various reality and talk show appearances might be surprised by his journalistic chops. In his interviews, Scott proves to be unwavering in his approach, and more importantly, he’s unafraid to ask some of his subjects difficult questions to their faces. As an interviewer, Scott is both empathetic and dogged, which is the perfect tone for what he’s trying to achieve. Perhaps if someone other than Scott was credited as the primary director here, the host would’ve had more of a chance to focus on these moments and his overall statement instead of the stress of trying to mount a feature length documentary. As a primer on the fight for energy choice, Jonathan Scott’s Power Trip is decent enough. As a documentary, this feels like a draft for something better.

Jonathan Scott’s Power Trip screens as part of Hot Docs’ Doc Soup subscription series via their streaming platform from Monday, November 9, 2020 until Sunday, November 15, with a pre-recorded Q&A featuring the film’s director and subject. All Hot Docs screenings are geolocked to Canada. It will also air on select PBS stations as part of their Independent Lens series starting on Monday, November 16th at 10:00pm. Check local listings for airdates in your area.