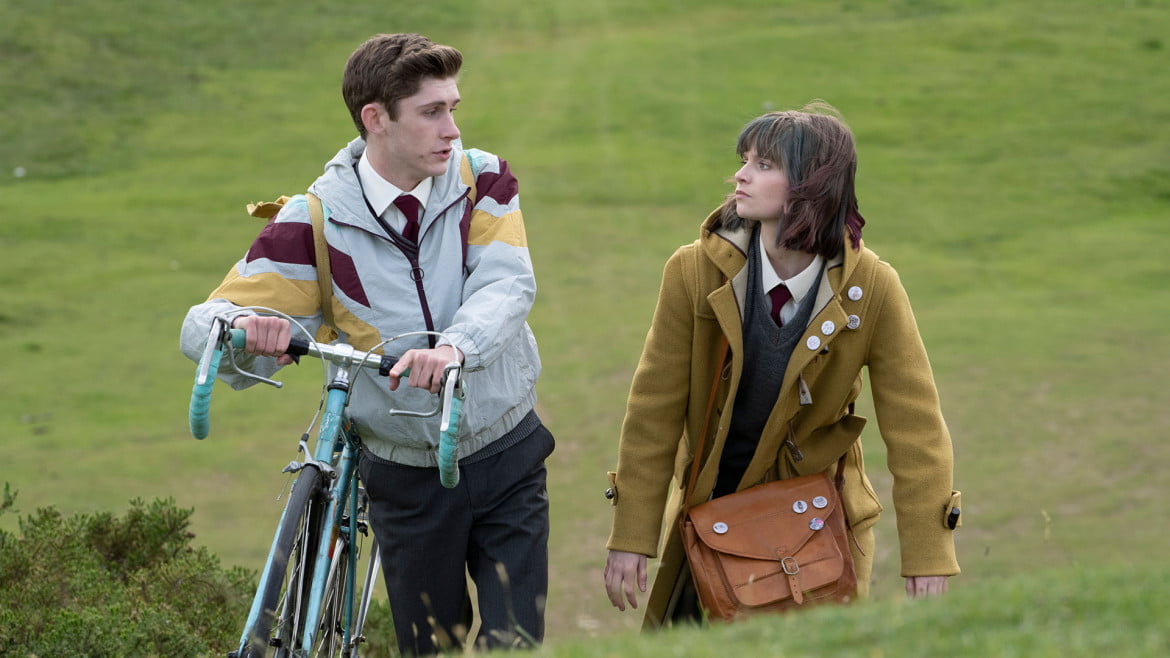 Hilarious, empathetic, and appropriately bittersweet, the queer, Irish non-rom-com Dating Amber is one of the bigger surprises in an otherwise dull and dreary year. Both a progressive teen movie and a dutiful period piece, writer-director David Freyne’s Dating Amber boasts timeless qualities and madcap comedic sensibilities that help the film linger in the mind of the viewer. Well performed and keenly attuned towards human nature and prejudices faced by members of the LGBTQ community – both in the film’s 1990s period and today – Dating Amber manages to be morally and emotionally complex while staying breezily and effortlessly funny. It’s a nice film about not-so-nice subject matter that can hold more weight with younger viewers than dozens of “it gets better” campaigns ever could.

Set in 1995 – two years after the decriminalization of homosexuality in Ireland – Dating Amber is the story of Eddie (Fionn O’Shea), a closeted teen living in a town obsessed with sending their younger citizens into military service. Eddie does everything in his power to come across as straight – like awkwardly making out with girls and doggedly trying to get into shape to take the upcoming cadet’s exam – but nothing seems convincing enough. Eddie’s plight is noticed by Amber (Lola Petticrew), the only known lesbian at his high school. Amber – a young entrepreneur who rents out caravans in her mother’s trailer park for horny teens to shag in – isn’t afraid of being different from her classmates, but she’s fed up with the constant grief and bullying she gets for appearing outwardly queer. Amber suggests to Eddie that they strike up a sham relationship to get them through to the end of their final school year. Eddie, already a bundle of nervous energy to begin with, reluctantly agrees. The two spark a close friendship that allows them to fly mostly under the radar, but while Amber becomes more comfortable with her sexual orientation over the course of their “romantic entanglement,” Eddie grows increasingly self-loathing and confused.

Despite the politically charged period setting (one that also saw a divorce referendum in Ireland around the same time), Dating Amber boasts the sort of story that could be taking place anywhere in the world at this very moment. Freyne’s comedy is of the high concept variety – packed with the sort of silliness and sex jokes that teens and adults alike will appreciate and understand – but also one that never loses focus on the pain at the heart of its core situation. Eddie and Amber are broken people for a variety of reasons beyond their sexuality, with the former having to deal with his parents’ crumbling marriage and crushing expectations, while the latter is still reeling for her father’s suicide. Dating Amber is first and foremost about the pressures faced by closeted young adults living in resoundingly hetero communities, but Freyne never leaves it at that, preferring to depict his two likable heroes as complicated individuals with numerous neuroses and responsibilities. 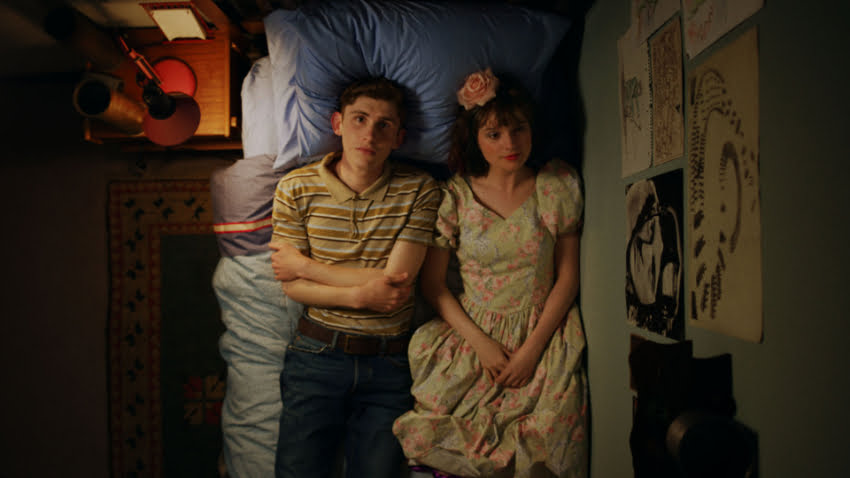 Dating Amber has a pleasing abundance of character to go along with its razor sharp wit, giving O’Shea and Petticrew a chance to turn in outstanding, impressionable lead performances. Petticrew takes what could’ve been just another punk rock chick with repressed feelings of loss and abandonment and turns it into a powerful, confident heroine that’s relatable and easy to root for, while O’Shea gets a chance to take his performance into some increasingly dark places. The closer the cadet’s exam draws near and the more Amber starts to enter into a real relationship with another woman, the more desperate and despondent Eddie becomes, with O’Shea nicely balancing the sillier tone of his comedic scenes with some impressive, wrenching dramatic work down the stretch. Together, O’Shea and Petticrew are a compelling team, but they’re just as dynamic to watch on their own.

While Freyne injects some choice bits of quirkiness into Dating Amber (most notably a cheeky, heavily Catholicized sex-ed video and a running gag revolving around random fights that break out when debating the merits of Oasis and Blur), the film is at its most enjoyable when the filmmaker keeps it real. The best scene in Dating Amber might also be its most subtle and poignant. During a trip to Dublin, Amber and Eddie stumble upon the first gay bar they’ve ever seen, and their speechless initial reaction speaks volumes to the queer experience. After years of searching for acceptance, they’ve found a place that gives them momentary relief, and Freyne and his actors make the scene feel like an enormous weight is being temporarily lifted off their young shoulders. It’s a wonderful and hopeful moment that brings the whole movie and its narrative motivations into sharper perspective.

While the overall point of Dating Amber is to get teens in similar situations to realize that they’re wonderful just the way they are, it also functions as a poignant love letter to the power of unwavering friendship. Although Dating Amber isn’t a romantic comedy, Freyne’s film exceptionally chronicles a friendship between two people who start out as strangers, but end up forging a bond that’s aching and loving in its own way. The outcome of Eddie and Amber’s friendship could be debated by some in terms of its effectiveness and narrative success, but I happen to think it’s brilliantly reasoned and more than earned by the film’s delicate set-up. No, they don’t get together, but they realize that they’re both in the same mess together, and they can’t let each other down. It’s far more affecting of a conclusion than any kiss at sunset could ever be, tying the whole thing together in ways that leaves viewers wanting more in the best possible way. In a just world, Dating Amber will be the next teen movie obsession and a stone cold classic in the eyes of anyone lucky enough to catch it. 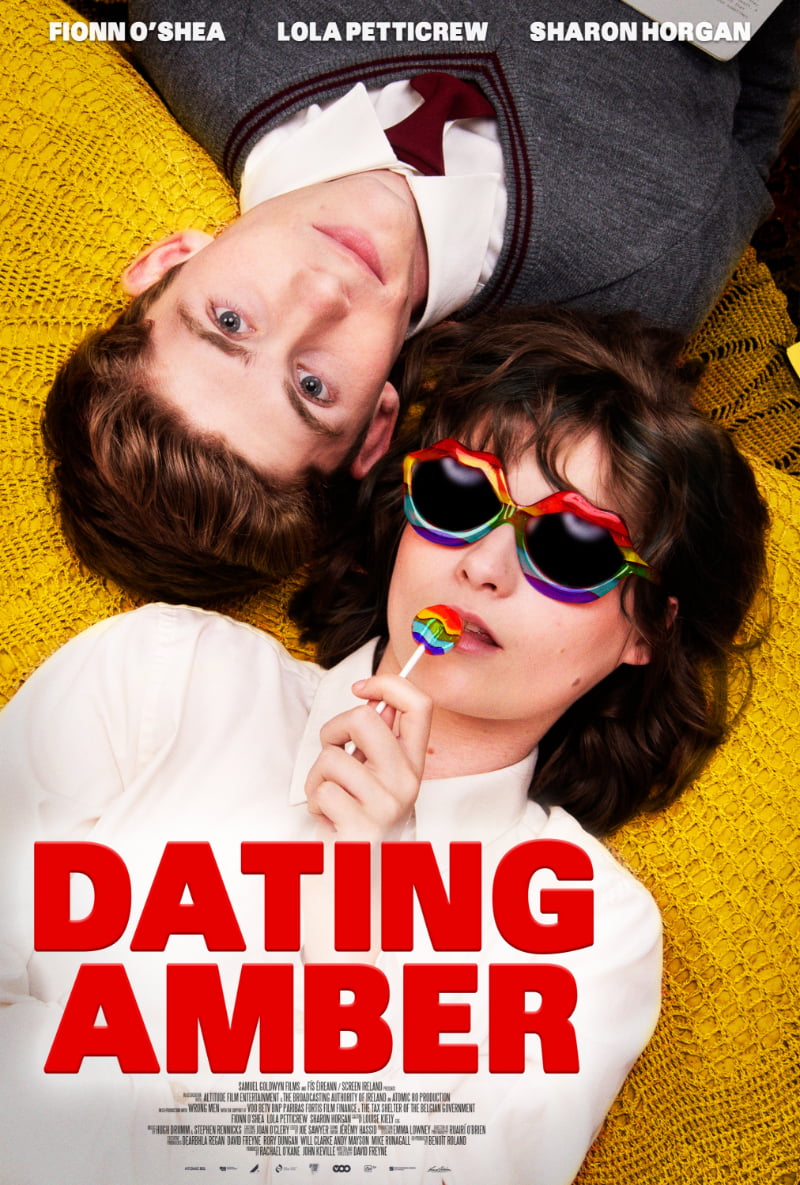