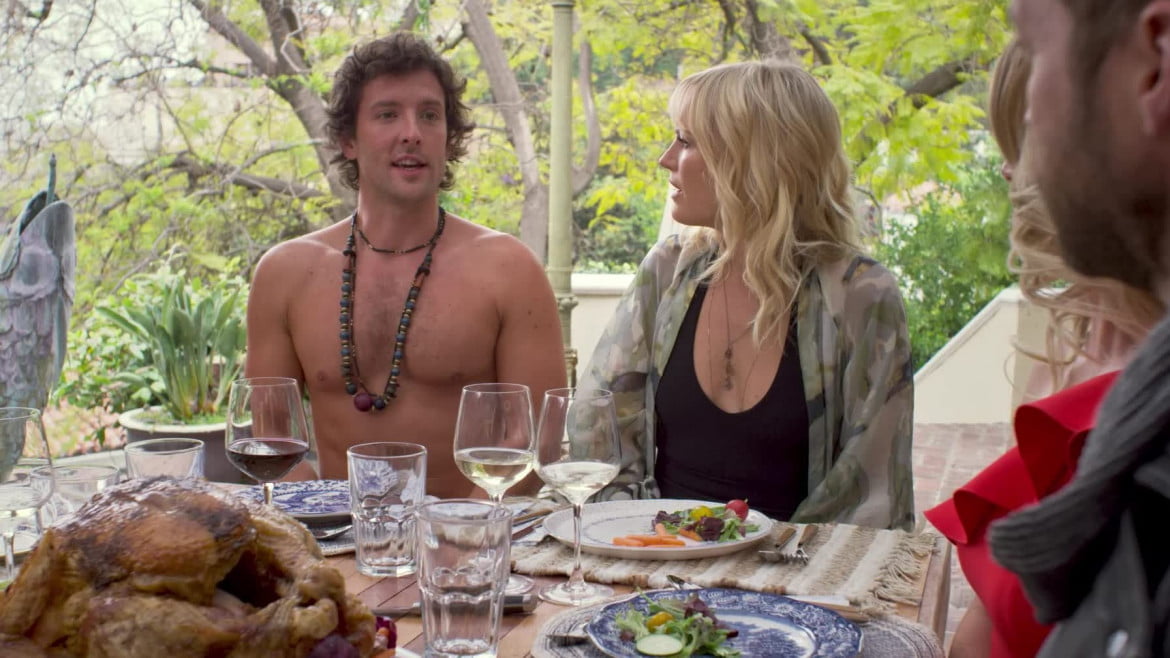 2020 has left many of us pining for reunions with friends and family, but the borderline unbearable and distressingly unfunny star-studded comedy Dinner with Friends might make anyone unfortunate enough to see it prefer their alone time. A choppy, slap-dash, paper thin and annoying piece of work, Dinner with Friends (which is known in the U.S. as Friendsgiving, as if Canadians wouldn’t understand the term) is the kind of film one hopes was fun to make for all parties involved because it isn’t fun to watch in the slightest.

Malin Akerman stars as Molly, a famous actress fresh off her latest smash hit and a contentious divorce. Now a single mother, Molly has a new boyfriend, Jeff (Jack Donnelly, Akerman’s real life husband), who seems to adore her and the baby equally. Molly wants to spend the Thanksgiving holiday with Jeff, but she has already made plans to hang out with Abby (Kat Dennings), her lifelong best friend who also recently got dumped by a partner. Abby, who started drinking early on Thanksgiving, isn’t thrilled that she has to share her best friend during a moment of need, but is incensed when she discovers that Jeff and Molly have invited more people to hang out, and that those guests have told others to come and join in on the fun. Everyone wants to party, gossip, and brag about their wonderful lives and relationships, but all Abby wants to do is drink, eat, and watch football.

It’s easy to sympathize with Abby, not just because Dennings is far and away the best thing about Dinner with Friends, but because writer-director Nicol Paone’s film is packed to bursting with annoying, unlikable, and worst of all, underdeveloped characters that no one in their right mind would ever want to be around. Paone has crafted a very L.A. movie, embracing every possible west coast and Hollywood caricature in the book, creating possibly the most self-congratulatory meta-comedy since Burn Hollywood Burn. That was one of the most painful motion pictures of all time, and Dinner with Friends – despite having a couple of saving graces – isn’t very far behind. It’s a film that loves fame and glamour almost as much as it loves to say how much it hates such things. The only audience for Dinner with Friends consists of the actors on screen, and it’s debatable if they would even like it outside of getting to hang out with their colleagues.

Paone has an extensive sketch comedy background, which explains the ensemble cast, having Ben Stiller on as a producer, and why almost none of this is funny, believable, or well made. It’s one thing to make up jokes and gags on the spot, but it’s another thing entirely to seemingly make an entire movie by the seat of one’s pants. Paone’s script – if they even went by one – is inconsistent to a point of narrative and emotional incoherence. From scene to scene, it’s almost impossible to predict what version of these characters will appear, almost as if this weren’t a friendly get together, but an out of control convention for bipolar sufferers. One minute, Molly is happy to be divorced, but seconds later – sometimes in the same conversation – she’s insecure. Abby could start a scene off sincerely, then turn bitingly sarcastic and bitter, and somehow end the scene in the same place she started. Jeff could be a nice guy or a secret jerk, but it’s impossible to tell because his only character traits are his accent and his great abs. 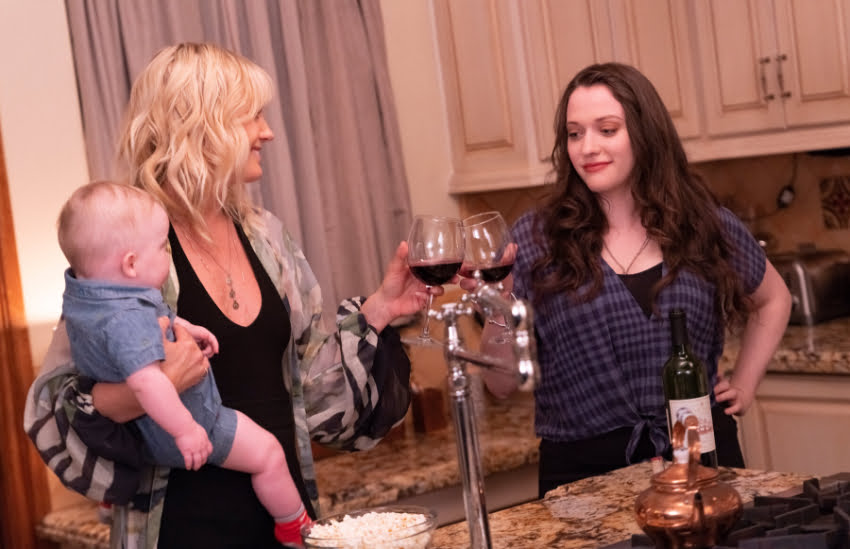 This blatant disregard for character extends to the cavalcade of performers unlucky enough to share the film with some already uneven protagonists. Aisha Tyler shows up as a stressed out mother and wife who brings her entire family, all of whom make a minimal impact on the movie except for the moment she makes out with Abby while tripping on shrooms. Jane Seymour vamps it up as Molly’s sexpot mother, a one joke character with an awful Swedish accent that’s never funny despite the actress’ best efforts. Christine Taylor plays someone who’s basically a mute as a result of too much bad plastic surgery, a character I feel sorry for more than I feel like laughing at. Taylor’s character is married to someone, but I already forgot everything about them. There’s a trio of awkwardly CGI assisted cameos where famous queer actresses play Abby’s “fairy gay-mothers.” Ryan Hansen looks lost and confused as a blandly good looking ex that still pines for Molly. Chelsea Peretti has basically two-and-a-half scenes as a “shaman” with repressed rage issues, both of them decent, but neither of them are enough to save Dinner with Friends.

Dinner with Friends is a film where normally very funny people are stuck doing boring, unfunny things. There’s no raucous energy to be found in a film that’s begging for everything to be cranked up to eleven. All that’s being cranked up in Dinner with Friends are the cringe-worthy and context free sex jokes and a smug wink-wink-nudge-nudge-“did you get that were from Hollywood” attitude. It’s impossible to identify with the relationship problems faced by Akerman (who’s also a producer and does an okay job holding things together), Dennings, and Tyler’s characters because those broken bonds are barely established for the audience. Dinner with Friends asks the audience to accept these people and their problems in good faith, and it’s an impossible ask. Everyone in Dinner with Friends has hooked up with pretty much every other character, and everyone seems terrible for each other by any metric. While it’s a progressive change of pace that the overall approach to sexuality in Dinner with Friends isn’t defined by gender norms or stereotypes, it’s off-putting to hear people you don’t care about in the slightest talking graphically about lubrication, piss play, and when someone is too old for anal. There’s no thought put into these jokes, and they die a slower death than watching someone reading Overheard LA aloud for ninety minutes.

If the jokes are mostly terrible, the actual assembly of Dinner with Friends is practically a war crime. Scenes sometimes end so abruptly that actors are cut off before they can fully finish speaking. Others linger far too long after the jokes have been told, with actors awkwardly ad libbing actions and reactions while waiting to be told “cut.” The interactions between the actors never feel like conversations between characters, but loose ideas told to performers given little direction beyond being told to go out there and try to make something work. There are borderline experimental bits – like having characters awkwardly read their dating profiles in momentum derailing direct address to the camera – that feel trucked in from completely different concepts. If it weren’t for Dennings’ ability to get a chuckle simply through voicing her contempt for those around her, Dinner with Friends would be unbearably dire. Instead, it’s just really bad.

Dinner with Friends has to resort to putting a child in danger to get its scattershot narrative under control for a few brief moments, before ending so abruptly and devoid of enthusiasm that one wonders if it wasn’t all a dream. There aren’t any interesting epiphanies or much in the way of a resolution, despite attempts to get semi-serious at the last possible second. There’s little sense that any of these people will change or learn from their experience, and that the viewer has shared in their ordeals for nothing. It’s never clear throughout this atonal mess if Dinner with Friends is attempting a take-down of LA phoniness or secretly celebrating it. No one needs friends like these, and if your choice this holiday season is to spend time with them or with your own thoughts, I can safely say you can come up with a better story in your own mind. 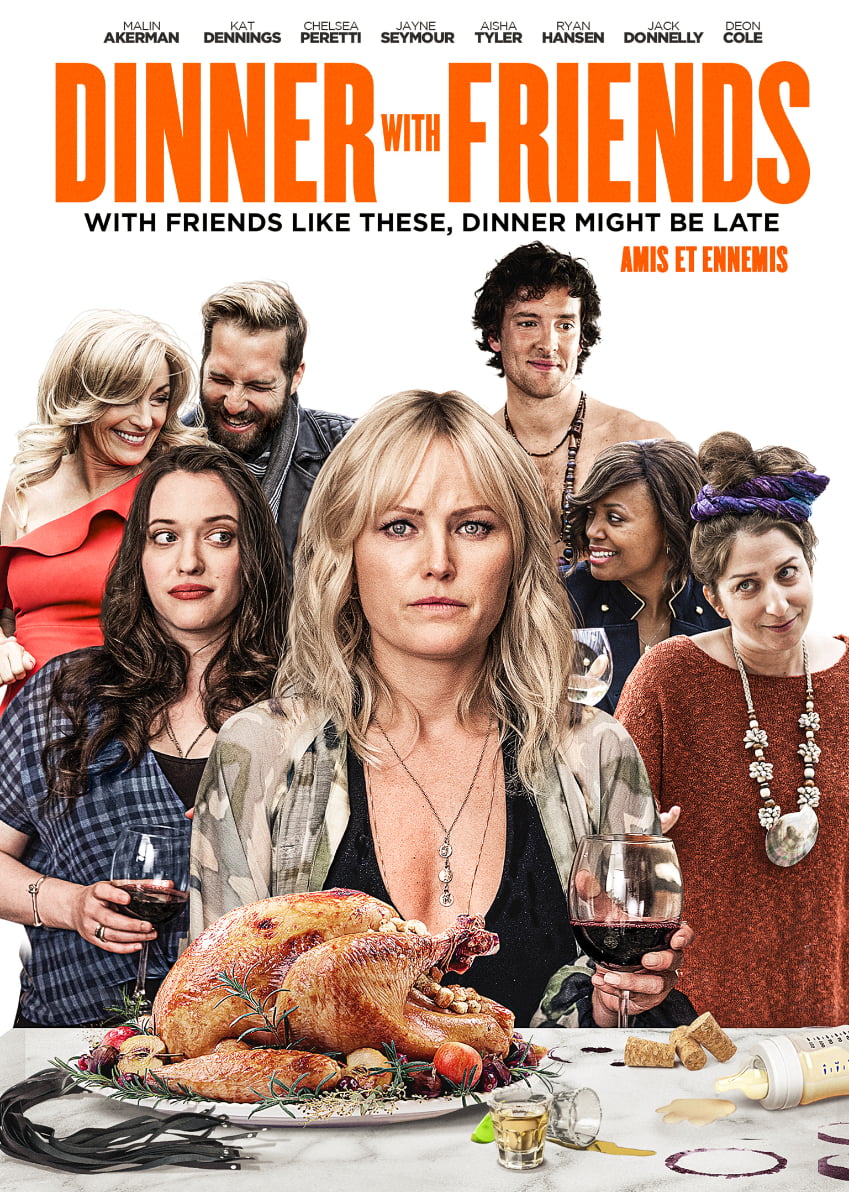 This fool clearly wants to be a filmmaker. I LOVED THIS MOVIE.