The Life Ahead | Review

The Life Ahead is a well conceived, outstandingly performed, visually compelling, and mostly predictable tale of two people from vastly different backgrounds realizing they have more in common than they initially thought. But what sets director and co-writer Edoardo Ponti’s adaptation of Romain Gary’s award winning 1975 novel and re-make of Moshe Mizrahi’s Oscar winning 1977 film Madame Rosa apart is a strong sense of purpose and character. Pleasingly complicated and refreshingly adult for a film about a wayward child, The Life Ahead is the sort of human drama that’s always in danger of giving in to easy answers and empty platitudes, but Ponti and his cast – including the director’s mother, Sophia Loren, in her first prominent leading role in a decade – refuse to turn in a reductive piece of work for the sake of audience uplift.

Momo (Ibrahima Gueye) is an orphaned twelve year old street kid who does anything he can to survive. Born in Senegal, but now on his own in a port town in Italy, Momo isn’t above robbing and stealing in a bid to please the surrogate father figure in his life, Ruspa (Massimiliano Rossi), a drug dealer who occasionally gives the kid work. One of the people Momo tries to rip off is Madame Rosa (Loren), an aging former sex worker and holocaust survivor. Rosa has made a meager, but relatively happy living taking care of the children of fellow sex workers, so dealing with difficult kids isn’t anything new. But when Momo’s guardian (Renato Carpentieri) asks her to look after his ward for a couple of months, she initially refuses. Eventually, Rosa relents and allows Momo to stay with her and the other children in her care, thinking that an unhappy life for the boy under her roof is better than turning him over to social services. A bond is slowly formed between the old woman and the young man, but it might not be strong enough to keep Momo from trying to make a living on the streets.

The Life Ahead and its source material are based on a parent-child odd couple premise that has been done nearly to death by this point, but it’s a plot that’s so identifiable and easy to buy into that filmmakers keep coming back to similar stories. The initial set-up of The Life Ahead offers few surprises as Rosa, Momo, and her other pre-teen ward, Iosef (Iosef Diego Pirvu), all push back against each other. Momo doesn’t want to listen, Iosef demands respect because he was there first, and Rosa doesn’t have the time or patience to listen to childish bickering. The viewer knows well in advance that Momo and Rosa will eventually find a common ground by sharing the traumas that led them to this point in their lives, and also that there will have to be a personal reckoning for Momo that will force him to reconsider becoming a drug dealer full time. None of the actual story points throughout The Life Ahead are ever in much doubt, but it’s what Ponti and his team do within these parameters that makes the film special.

Most impressively, The Life Ahead is the rare sort of film that treats traumatized youths as young adults rather than infants who need constant coddling and supervision. That’s not to say that Rosa believes in “tough love,” but rather that she prefers to treat those in her care as human beings who already know at a young age that life can be harsh, dangerous, and unfair. None of the adults in Ponti’s film – including the primary antagonist – talk down to the younger characters, and the final results are all the richer for it. The drama that comes from treating children as young adults and not as babies feels a lot more authentic and empathetic. There have been plenty of versions of this story where filmmakers have fallen into a trap that assumes love will save the day. The Life Ahead counter argues that love is important, but mutual respect goes a lot further in turning a life around. 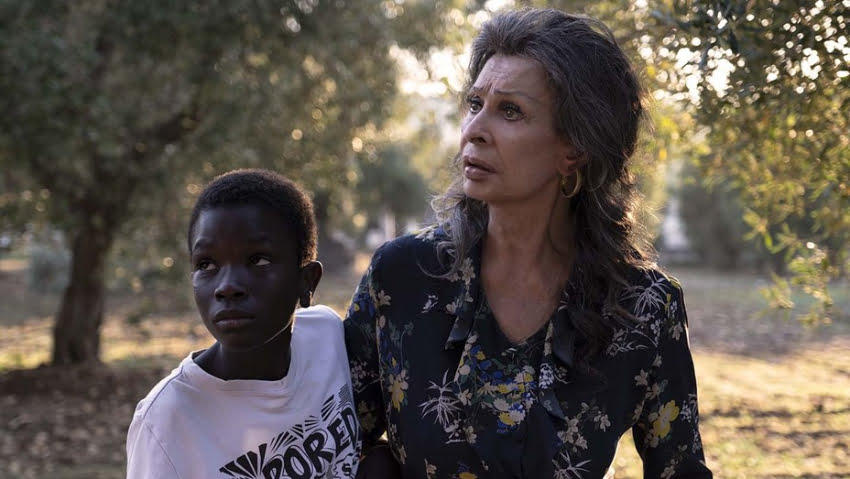 Ponti and Loren also refuse to portray Rosa as a white saviour to black Momo. Rosa is far too complicated and flawed to be anyone’s outright saviour, and many of Momo’s biggest revelations are made on his own. Through both characters and their shared, but vastly different experiences, Ponti tackles racialized poverty head on and with a great deal of integrity, by letting Momo (who also narrates) guide the story and overall point of view. The Life Ahead treats its young protagonist and his life experiences without judgment or offering up unsolicited advice. It’s a film that’s smartly written enough to convey a message about poverty without speaking down to the unique experiences and circumstances at hand.

The Life Ahead will immediately remind viewers of the sort of effortless star power Loren can bring to a film (even well into her eighties), but it’s her chemistry with equally impressive newcomers Gueye and Pirvu that offers the actress a chance to further stretch her acting muscles. There’s a toughness to these characters that works wonderfully whether they’re being harmonious or combative with one another. All three have experienced traumas, and whenever something is threatened to be taken away from them, Rosa, Momo, and Iosef lash out at anyone unlucky enough to be nearby. Iosef, whose mother (Abril Zamora, in yet another of the film’s notable supporting turns) is still in the picture, fears the high maintenance Momo will take all of Rosa’s attention, leading to some wonderful background tension throughout. What brings Iosef together with Momo is their shared concern for Rosa’s heightened PTSD and mounting health problems, making them just as healing to her as she is to them. None of these characters seem to fully trust each other, but they each know how terrible the world can be and stick together out of respect. Loren might be the biggest star, and Gueye might be the standout leading character, but together they make The Life Ahead into a refined sort of tearjerker that rises above its melodramatic status.

Ponti (Between Strangers, Coming & Going) gives his actors the proper space to explore and experiment, freeing himself up to make sure The Life Ahead looks as realistic and subtly detailed as possible. Ponti has moved Gary’s story from Paris to a fishing port in Italy, and one could argue that the film is all the better for the change in scenery. The Life Ahead is set in a place where new money, old world splendour, blue collar sensibilities, and poverty are always fighting for space, making the themes at the heart of the story shine brighter in such an environment without too much obvious symbolism. Many of the settings are classically stylish, yet curiously decrepit in some respects, offering up a rot that peeks through the thin veneer of refined society. It’s a sunny film where the darkness is out in the open, captured nicely through cinematography that’s in near constant motion without being shaky or distracting.

The Life Ahead builds to an expected conclusion that’s telegraphed in the opening moments, but even if the eventual destination doesn’t surprise viewers, everything leading to that point boasts assured and layered storytelling and performance. It will probably generate some nostalgic Oscar buzz thanks to Loren’s presence, but Ponti’s film is better than any one of its components. Don’t be dazzled by the presence of world cinema royalty. Take The Life Ahead as a whole and one will be surprised by what they find.

The Life Ahead is available to stream on Netflix starting Friday, November 13, 2020.