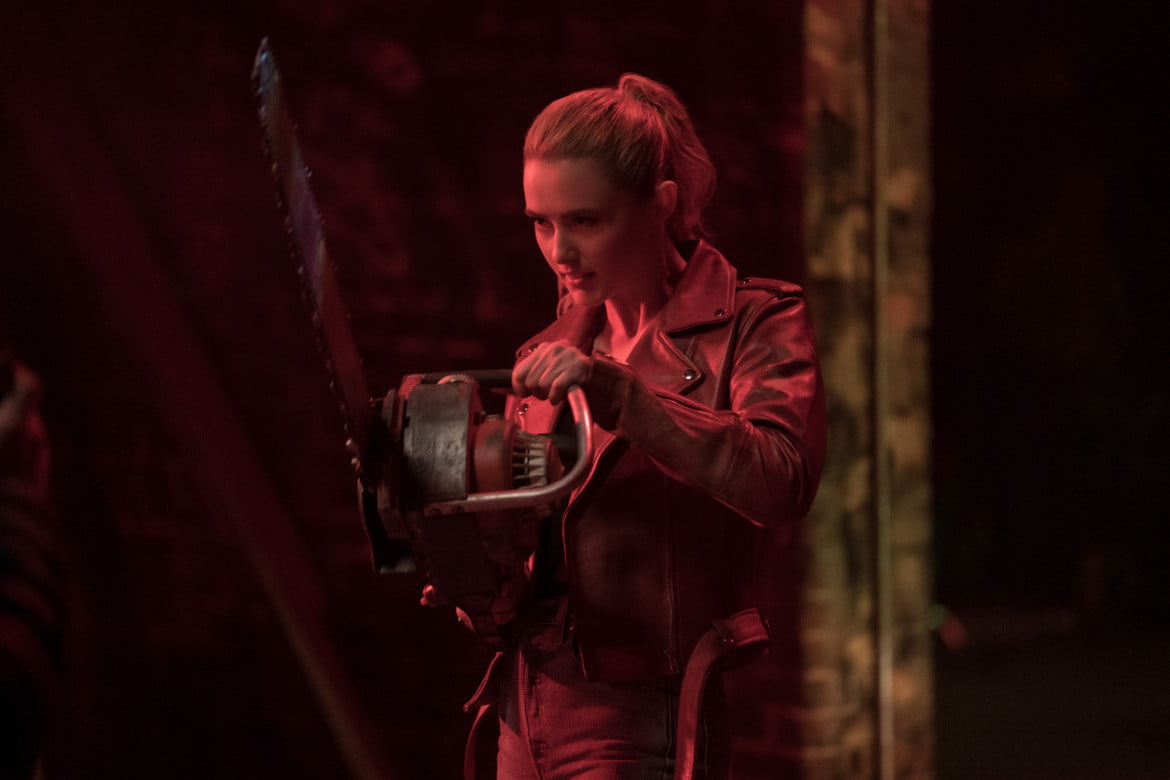 After getting off to a madcap and pleasingly bloody start, the body swapping and slasher movie mash-up Freaky peaks early before dying a painfully slow and unfunny death. A film that’s ultimately done in by overestimating its own sense of cleverness and creativity, it’s a lot like director and co-writer Christopher Landon’s most notable success, Happy Death Day, which mashed-up a Groundhog Day premise with a slasher movie. It’s another effort with an intriguing, cheeky premise and only a basic implementation of its own high concept plot. Once it’s known exactly where Freaky is headed (very, very early on), it becomes a mean spirited chore to sit through, salvaged only by some perfect lead casting that brings more spark to Landon’s material than it probably deserves.

Every year around high school homecoming in a sleepy, suburban town, The Blissfield Butcher (Vince Vaughn), a hulking masked murderer, starts carving up horny teens and leaving everyone in a panic. Actually, I’m not sure if it’s every year. It seems like every few years. Or maybe the police are just too stupid to notice that violent crimes happen every year around the same time. I think there’s also a mention that he strikes around prom, too, because I wrote that down at one point, despite Freaky taking place in the fall and not early summer. There’s a joke that’s tossed off about the school refusing to ever cancel homecoming, but it’s not enough of an explanation to make any sense as to why this all keeps happening. Freaky is a proudly and profoundly dumb slasher movie, but right out of the gate it asks the audience to suspend their disbelief to unbearable degrees before the high concept plot even kicks into gear.

Millie Kessler (Kathryn Newton) is one of those young women who only exist in “classic” movies: a smart and attractive person who’s constantly and inexplicably bullied for being ugly. Millie’s father died a year ago, and she’s been spending far too much time trying to keep her alcoholic mother (Katie Finneran) happy. Millie’s older sister (Dana Drori) is a cop. Her best friends are a catty, flamboyant gay (Misha Osherovich) and a supportive, progressively minded black woman (Celeste O’Connor). She plays the school mascot and has a crush on a kind-hearted jock (Uriah Shelton). A chauvinistic shop teacher (Alan Ruck) is constantly on her case. The resident social media loving mean girl (Melissa Collazo) is always giving her a hard time and lacing her overtures of friendship with sarcasm. With Millie’s overstuffed backstory alone, Landon seemingly wants Freaky to earn a Guinness recognition for the most overused cliches piled onto a single character.

Millie is attacked late one night by The Butcher, who stabs her with an ornate knife used in Aztec ritual sacrifices that he stole from a previous crime scene. The Butcher doesn’t kill Millie when his plans are thwarted by her sister, but overnight they find that they’ve swapped bodies. The Butcher wakes up as Millie, confused at first, but then gleefully excited to blend in with his intended crop of victims. Millie wakes up and understandably wonders how she’s going to convince her friends and family that this tall, run down, and freakishly strong middle aged man is actually a teenage girl. Eventually, Millie as The Butcher is able to convince a few people that she is who she says she is and then sets out to put a stop to the killing spree and stab the real killer with the mystical dagger before midnight and the change becomes permanent.

Landon’s Freaky Friday the 13th – an obvious joke that the filmmaker REALLY, REALLY wants viewers to notice – is every body swap and slasher movie rolled into a single, ungainly package. That’s the core joke (albeit not the best one here), and for about the first 45 minutes or so, Freaky generally pulls it off with an inspired, knowing awareness of its own sense of overkill. Following an impressively gory opening sequence showcasing just what The Butcher is capable of – packed with the sort of inventive kills the MPAA never would’ve signed off on thirty-five years ago when both of Freaky’s genres were in their heyday – Landon’s story hits a lull while getting to know Millie’s convoluted history, picking up again once the body swap has taken place. Freaky is the type of slasher that lets viewers know in no uncertain terms which characters will be brutally dispatched before the end of the final act, but instead of doing so with wit and creativity, Landon (who also really loves colour coding and foggy nights) mistakenly thinks that following genre tropes to the letter is the most creative thing the filmmaker can offer. It’s frequently annoying, like watching someone begging for acclaim for simply having watched a few movies in their life. (And yes, I firmly understand the irony of a film critic making such a statement.) 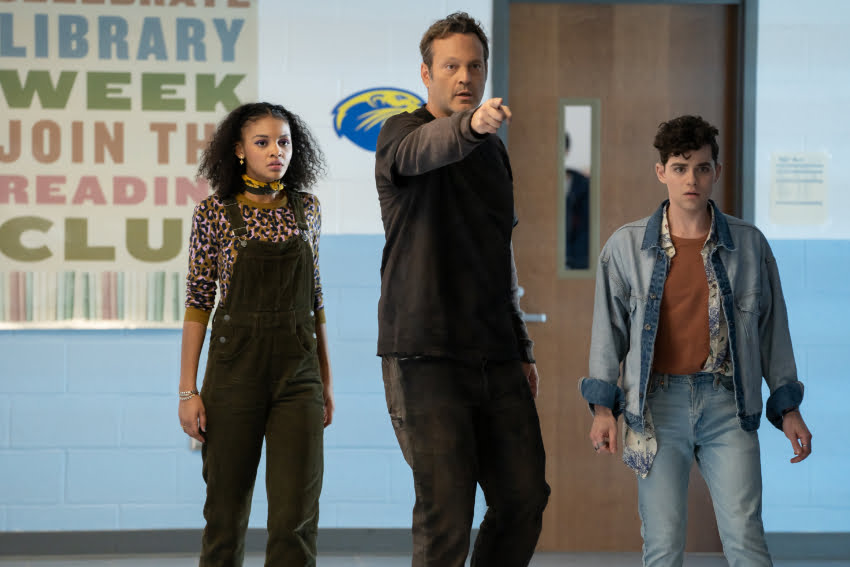 The body swap shenanigans are rarely funny in terms of the writing and never frightening for a second, with the only truly sly bit of commentary coming from the fact that previously meek Millie has finally become empowered by seeing the world’s reaction to a white middle-aged man. For all its false “look at me” cleverness, Freaky rises and falls on two simple questions: Can Kessler play a creepy killer and can Vaughn credibly portray a modern teenager? The answer to both questions is yes, with both actors remaining engaging and watchable even when Freaky is at its lowest and most creatively bankrupt. Kessler’s devilish grin and thousand yard stare is well opposed to Vaughn’s ability to nervously bite his cuticles. The casting works and most of the film’s limited success is because of their abilities.

The bits of Freaky that work in the first half of the picture could only be called passable and lightly amusing at best, but there’s a single set piece where the whole thing falls apart and Landon’s film never regains its bearings. Beyond this point – just after one of the film’s best and most justifiable kills – the body count stops growing and Freaky becomes a standard race against the clock adventure, as Millie Butcher and friends attempt to steal back the dagger before midnight. Landon, who seemingly never met a cheap, obvious innuendo or gay panic gag he didn’t immediately want to use, makes Freaky devolve into a crude, classless comedy that should have some natural tension given the premise, but instead focuses on lame jokes and predictable situations for thirty minutes before presumably getting back to the good stuff. Vaughn and Kessler are still good in these moments thanks to their comedic timing, but Landon’s material is letting them down tremendously.

Just when it seems like things are going to pick up during the final act, Freaky doubles down on its absolute worst impulses by mounting an attempted rape scene out of nowhere just to goose the audience. It’s in poor taste (and much of the film is already that way by choice and design), but it might’ve meant something if it didn’t feel so left field and if a much better movie was sparked in its wake. Instead, Freaky conjures up not one, but two deathly slow and unexciting conclusions back to back that a better writer could’ve and should’ve condensed into a single bravura scene. By going to the lowest level a film could possibly go to, Freaky lost me entirely. By slowing down the ending and not offering anything clever or new, it ended up boring me to a point where I kept looking at my clock and wondering if it was ever going to finish.

I wasn’t a fan of Happy Death Day either, and it seems like Landon is about to settle into a groove as a filmmaker who takes the slasher genre and marries it with a different sort of high concept plot from the 80s and 90s that maintains viewer nostalgia. As with Happy Death Day, Landon makes sure that Freaky is as cynical, callous, abrasive, and rib-nudging as possible, and it will likely appeal to the same crowd. It’s cheap and effective, but not particularly good. And yet, I hope that Freaky might have a sequel. Landon’s Happy Death Day 2U was exactly the sort of gleefully bonkers and genuinely fun concept that I wanted out of the previous film. Hopefully, Freaky will have the same trajectory and Landon will get it right the second time out. 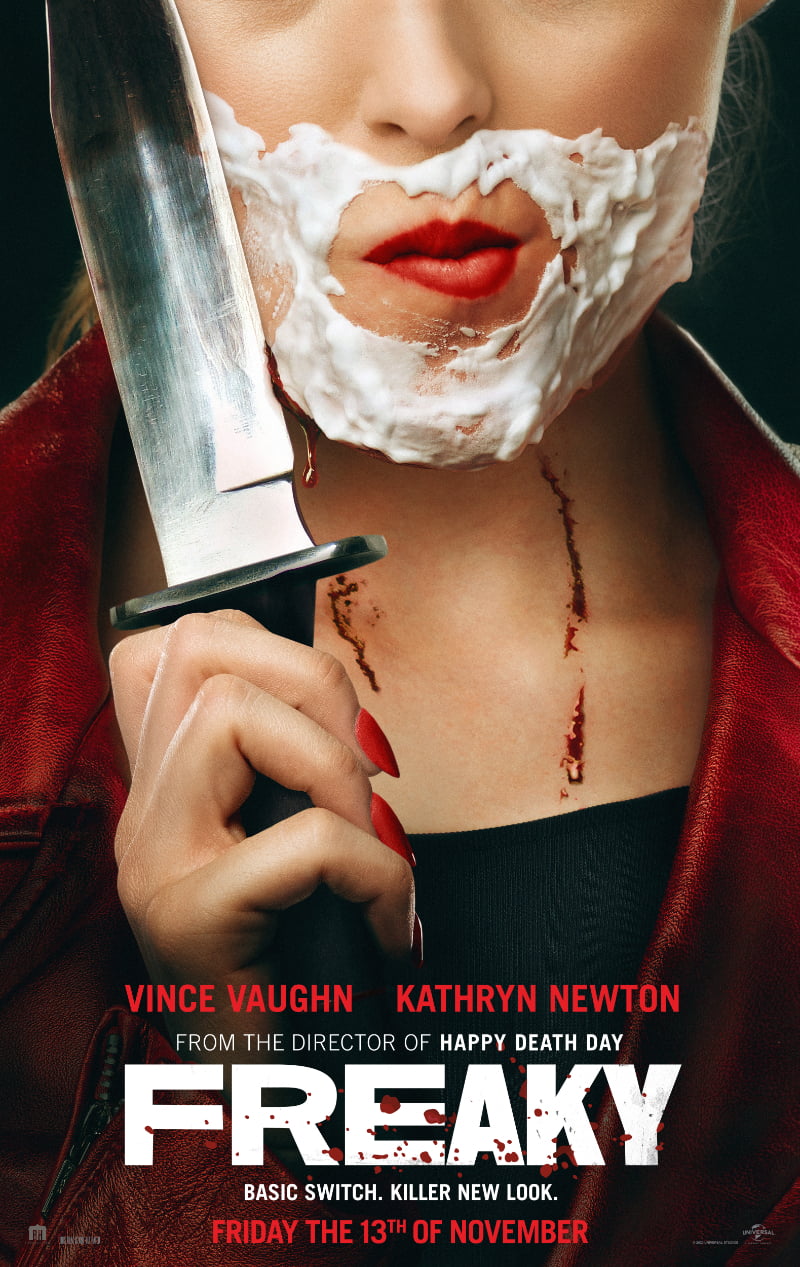