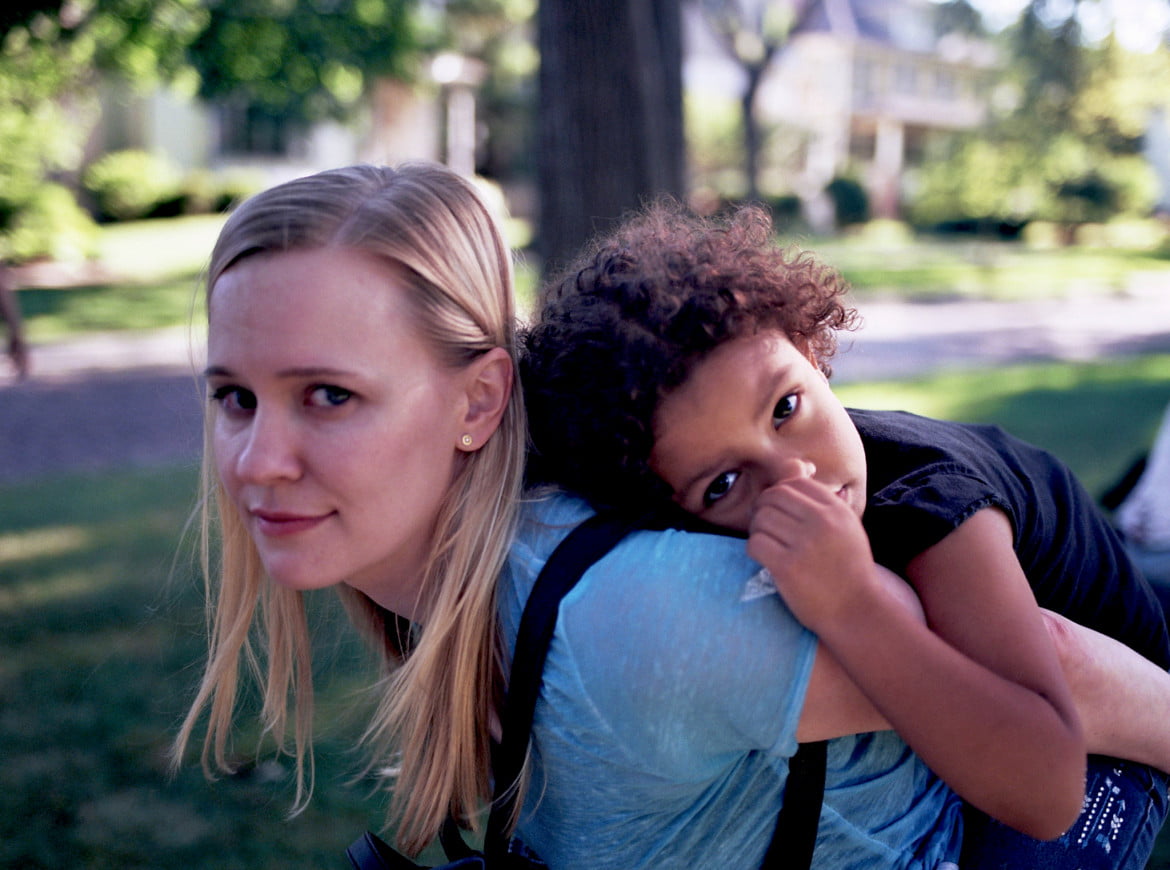 Director Alex Thompson and writer-star Kelly O’Sullivan’s Saint Frances starts off unassumingly, with a premise that has been a jumping off point for plenty of classic comedies: an unlikely and largely unfit caregiver clashes and bonds with the precocious, rambunctious child they’re tasked with guarding. For about the first thirty minutes or so, it seems like Saint Frances is destined to be a likable enough riff on such a familiar story, but Thompson and O’Sullivan gradually keep adding a tremendous amount of depth the longer they spend with these characters and their complicated situations. It’s the type of film that pulls the audience in with familiarity, only to end up leaving them spiritually and emotionally fulfilled while entertaining them. It’s empowering, heartbreaking, and one of the most satisfying films of its kind.

Thirty-four-year-old Bridget (O’Sullivan) has been stuck in a rut for quite some time. Currently working as a server, the once promising writer dropped out of university and has been struggling to find her footing in the Illinois suburbs ever since. Desperate for a new job, Bridget applies for a nanny position that’s been recommended to her by a baby-crazy friend. Bridget doesn’t have many tangible qualifications, but queer parents Maya and Annie (Charin Alvarez and Lily Mojekwu) are desperate for help with their oldest since the arrival of a newborn. While Annie works and Maya deals with the baby, Bridget looks after Frances (Ramona Edith-Williams), a young girl who’s exhibiting the typical anxieties and push-back most kids have when dealing with the arrival of a new sibling. Frances repeatedly tests the boundaries of Bridget’s patience and abilities, but dealing with the kid is almost preferable to the nanny’s personal life. After hooking up with Jace (Max Lipchitz), a nice enough guy almost ten years her junior who adores Bridget, but whom she doesn’t want to date or settle down with, she finds herself pregnant. After getting an abortion and starting an ill advised flirtation with Frances’ guitar instructor (Jim True-Frost), Bridget’s relationship to the young child in her care and the girl’s family gradually allow the lapsed Catholic to reassess her life and choices.

Saint Frances dispatches with its raunchiest gag so early on that it tricks the viewer into thinking they’re going to get just another naughty comedy. It doesn’t take long for director Thompson (who’s also the editor on his first feature) and O’Sullivan’s outstanding screenplay to prove those initial reactions wrong. While there’s plenty to be said about early onset middle aged anxiety, parenthood, Catholicism, relationships, attraction, family, patriarchal constructs, friendship, and taking responsibility for one’s actions throughout Saint Frances, the film is most poignantly a funny and often heart-tugging reflection on the nature of feelings. It’s often a reductive and precious compliment to say that a film “hits you right in the feels” these days, but Saint Frances is the rare example of a film that wants to talk about why those feelings matter and why they should be expressed and never ignored. It’s a story where intimately written characters with different sets of baggage are freed simply by speaking all the things that are so hard to express that they’re often left unsaid.

O’Sullivan’s script plays out like a great novel, with every character and scene adding further complexity, drama, and comedy. The characters of Bridget and Frances grow and evolve because the people around them have found it within themselves to change, for better and for worse. Bridget’s parents are doing everything possible to better their health and happiness. Easy going parent Maya is doing her best to bottle up her stresses, while stern parent Annie is increasingly frustrating, suspicious, and lashing out. Jace is head over heels in love, but his ways of expressing those feelings change with each passing rebuff from Bridget. The reason why Bridget and Frances end up getting along better over time is a simple matter of both characters wanting to be noticed, acknowledged, and loved for who they are, not merely what they represent to others. One of the only true villains of Saint Frances outside of the lecherous, obviously trashy music teacher – an arrogant “girlboss” and former classmate of Bridget’s who’s willfully oblivious that she’s turned her own child into a rampaging, petulant piece of shit – is the type of person who never changed and refuses to acknowledge her lack of growth. 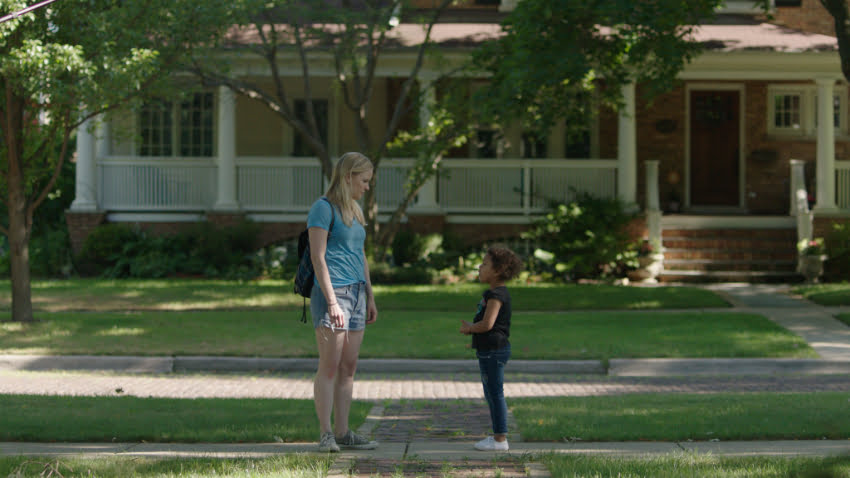 While ostensibly a comedy throughout, Saint Frances gains a lot of emotional steam the longer one spends around the characters. The more one learns about them, their situations seem relatable, funnier, and sometimes a lot more tragic and painful than viewers might’ve expected from the set-up. The tone of Saint Frances turns a lot more serious as it goes along, including a brilliantly written and performed sequence where Bridget and Frances discuss heavy topics like suicide, religion, and divorce over ice cream. And yet, watching a floundering nanny and her adorable ward talk about such topics never feels out of place because O’Sullivan, Thompson, and Williams (who, like her character, seems wise beyond years) have adequately shepherd viewers to this pivot point. The viewer cares enough about these characters by this point to genuinely want to hear what they have to say, and not merely revel in their sometimes outlandish, yet believable situations.

O’Sullivan and Williams have outstanding chemistry, with their constant give and take providing much of the film’s comedic tension and dramatic subtext. Their performances are star making ones, and O’Sullivan’s career prospects as an on screen presence and writer are bright. O’Sullivan is a commanding presence here, showing up in every scene and playing a thoroughly convincing everywoman, but she also gets tremendous help from Lipchitz, Mojekwu, and Alvarez, with the latter two giving some of the best and most substantive supporting performances of the year. Lipchitz’s almost adorably goofy suitor rises well above what could’ve been a single joke character and ends up becoming a thoughtful reflection on modern masculinity. Mojekwu and Alvarez, on the other hand, provide Saint Frances with most of its drama, as Maya’s increasingly obvious postpartum depression threatens the happiness of her marriage. There’s not much in the way of cinematic style to be found throughout Saint Frances, but these characters are so rich and impactful that there’s no real need for flash and panache. The cast and writing can do well enough on its own, and all Thompson really has to do is maintain a supportive, creative, and believable environment for his performers and the material.

Through these side characters, Bridget learns how to love others more than she loves herself, which is a challenge because it’s clear that this not-so-young-not-so-old woman hasn’t shown herself any compassion in far too long. Saint Frances has all the intimacy and purposeful awkwardness of reading the personal diaries of the characters involved, a sentiment that O’Sullivan’s script hilariously hints at during one of its funnier, most cringe-worthy scenes of unabashed sincerity. Like many great films, Saint Frances is one that will leave the viewer thinking about it long after it’s over, which is a rarity for comedies that are most often heralded for one-liners, set-pieces, and over-the-top performances. Most importantly, it makes viewers hope these characters turned out okay. They’re people viewers like being around and sharing in their joys and pains. There are few movies made these days like Saint Frances, so when one comes along, it’s a just cause for celebration.

Saint Frances is now available in Canada on VOD. 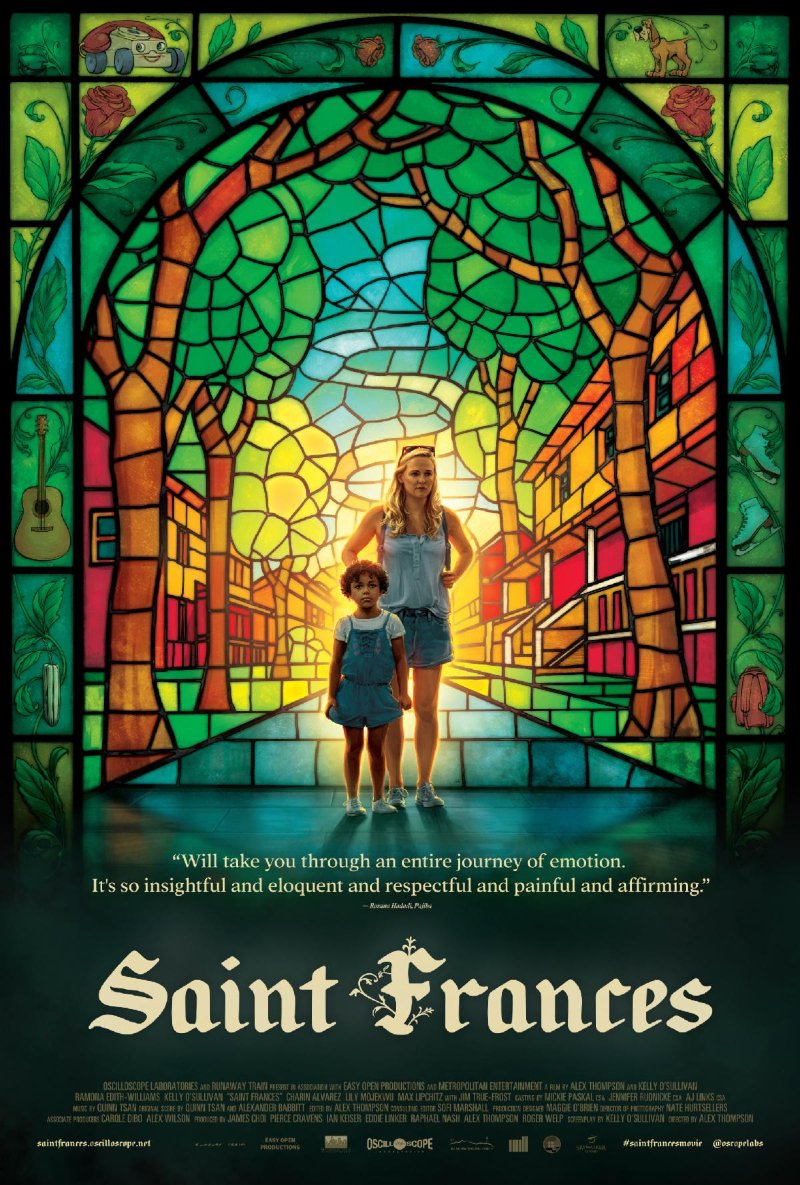