DVD Tuesday: ‘Defiance’ & ‘He’s Just Not That Into You’ 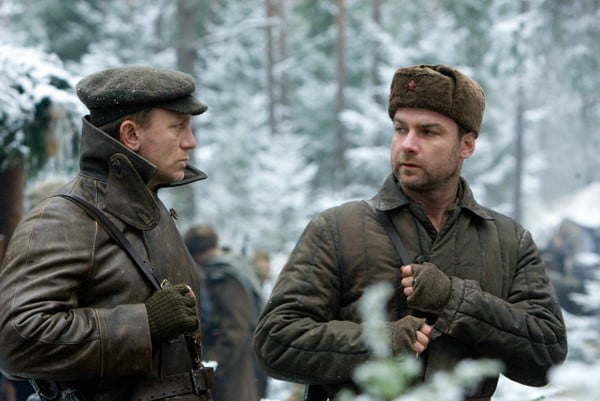 Out this week on DVD, Daniel Craig drops the machismo of Britain’s 007 for the bitter cold of Eastern Europe as he plays a man trying to save a group of refugees in Defiance; He’s Just Not That Into You features an all-star cast attempting to bring real life to the pages of a popular self-help book; and we take a quick look at Fanboys, Dr. Horrible’s Sing-Along Blog, and Revolutionary Road.

Defiance
Taking a different slant from the usual World War II movies, Defiance is an action-driven drama about a group of Jewish refugees fighting to stay alive in Eastern Europe.

Based loosely on a true story, the film was directed by Edward Zwick, who is known most recently for his work on the film Blood Diamond. Starring Daniel Craig, Liev Schreiber, and Jamie Bell, the story follows three Russian brothers protecting their outcast community from the Nazis. The trio are increasingly put to the test as more and more people join them in the forests of Belorussia.

As winter approaches, and life gets even more difficult, the brothers must decide what to do next: hunker down for the winter, or join the Russian resistance and fight the Nazis head on.

Although Defiance was nominated for a Golden Globe, the film failed to make much of an impact when it came to theatres, which is unfortunate, but perhaps understandable.

The cast certainly is worth a look, and when the action arrives, it is incredible, but Defiance never seems to be able to lift the drama off the ground. Craig and Schreiber are believable, but the script is just not strong enough, and never gives these two the opportunity to act as true brothers. That drains some of the emotional energy from the entire story, which is otherwise poorly paced and ragged.

What is most unfortunate is that this is a remarkable story, based on the lives of the Bielski partisans, but for a tale with so much going for it, the filmmakers were simply incapable of taking it to the emotional heights it rightly deserved.

Starring Jennifer Aniston, Ben Affleck, Drew Barrymore, Scarlett Johansson, Jennifer Connelly, and Justin Long, the film is a definite girly-flick, which could be a hard sell for anyone but the ladies. It also paints a fairly one-shade portrait of men in general, but that’s actually not an altogether bad thing, it’s just a sad fact for a story that is supposed to be so revealing.

As a guy, I’m clearly bound to side against the film, because it’s simply not meant for me, but I’m also turned off by the film’s lame plotting, and the oh-so-predictable dialogue. Which is a shame, considering a lot of the female characters are endearing and interesting. I also credit all of the interesting characters to the cast, rather than the script, which I’d like to remind you, is based on a self-help novel.

Also coming to DVD this week…

Fanboys
The geeks take to the road in this silly comedy about a group of dweebs who have one dorky mission: they want to break into Skywalker Ranch to see the first Star Wars prequel before it’s released.

Kristen Bell, Dan Fogler, and Seth Rogen star in Fanboys, which also features cameos by some of the biggest names in nerd, including Billy Dee Williams, Carrie Fisher, and Kevin Smith.

Expect a lot of the usual spoofy fun, but not much else. Critics have pretty much universally panned the film for being a waste of time.

The story simply revolves around Dr. Horrible, an aspiring villain who wants to join the Evil League of Evil. He also has his heart set on a girl named Penny, played by Felicia Day, and has to deal with the superhero Captain Hammer, played by Fillion, who keeps getting in the way.

Revolutionary Road
Finally, Kate Winslet and Leonardo DiCaprio are together again as a married couple trying to survive 1950s suburbia. The story sounds like scraping nails across a chalkboard, but the film has received a lot of praise for its cast.

“Strong performances steer this 1950s marital drama out of a period-picture trap,” wrote Kenneth Turan for the Los Angeles Times.