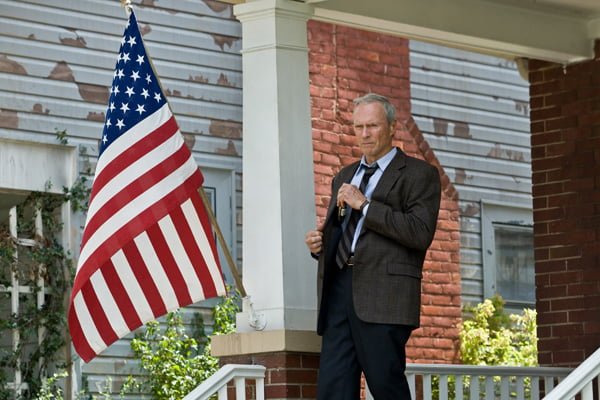 A fresh stack of DVDs arrive in stores this week, including the Clint Eastwood drama Gran Torino, The International starring Clive Owen and Naomi Watts, plus the teen comedy Fired Up.

Gran Torino
Throughout his long and incredible career, Clint Eastwood has starred in and directed some of the most interesting and amazing films of the last forty years. In that time he has played his share of tough, no-nonsense men, and directed his share as well, but the character of Walt Kowalski takes that old surly attitude to new heights.

Eastwood stars in and directs Gran Torino, an odd drama about a prejudiced old man named Walt who becomes an icon for the people he seems to hate.

Disenfranchised from his church, his family, and living in a community that has slowly been turned into a multicultural suburb, trouble comes to his own front yard, and aging Walt doesn’t hesitate in dealing with a local gang that is making trouble for the family next door.

As the community celebrates him he tries to adjust, and slowly comes to realize what he really thinks about the people he has always riled against.

For me, what makes Gran Torino a good film is not necessarily the acting, or even the direction, but the tones in the story itself, which take a head-on approach to racism. It is not a subtle film, but it can be clever, and Eastwood plays Walt to the utmost believable level, infusing the character with heart, buried beneath the broken, craggy exterior.

The truth is that a lot of the film left me rolling my eyes, including most of the last twenty minutes, but Gran Torino left an impression on me that conquers even the most ham-fisted and melodramatic of endings.

Considering Eastwood has suggested this might be the last film he stars in, it’s a worthwhile effort, and his performance is a huge part of that. But looking at his recent directorial efforts, including Changeling and Letters from Iwo Jima, it’s clearly time for Eastwood to stick to directing.

That said, critics have a tendency to reject films that don’t strive for greatness and they often miss one of the most important things: sometimes audiences just want a good laugh. It’s not rocket science people.

In this made-for-teens film by first-time director Will Gluck, two high school guys (Nicholas D’Agosto and Eric Christian Olsen) ditch football camp for their dream experience: cheerleader camp. As the only two guys with this idea, this of course gives them access to a camp full of beautiful women, but what happens when one of them falls for the head cheerleader? Or when the two guys need to actually help make it into a cheer competition?

Fired Up will not win any awards, but it will make you laugh and the rapid-fire puns and jokes are ten times more ingenious than any of the recent spoof movies. Considering my initial disdain for this film, I almost feel like I owe the filmmakers some sort of apology, but they’ll have to settle for my happy recommendation of this slick and silly comedy.