The War with Grandpa | Review 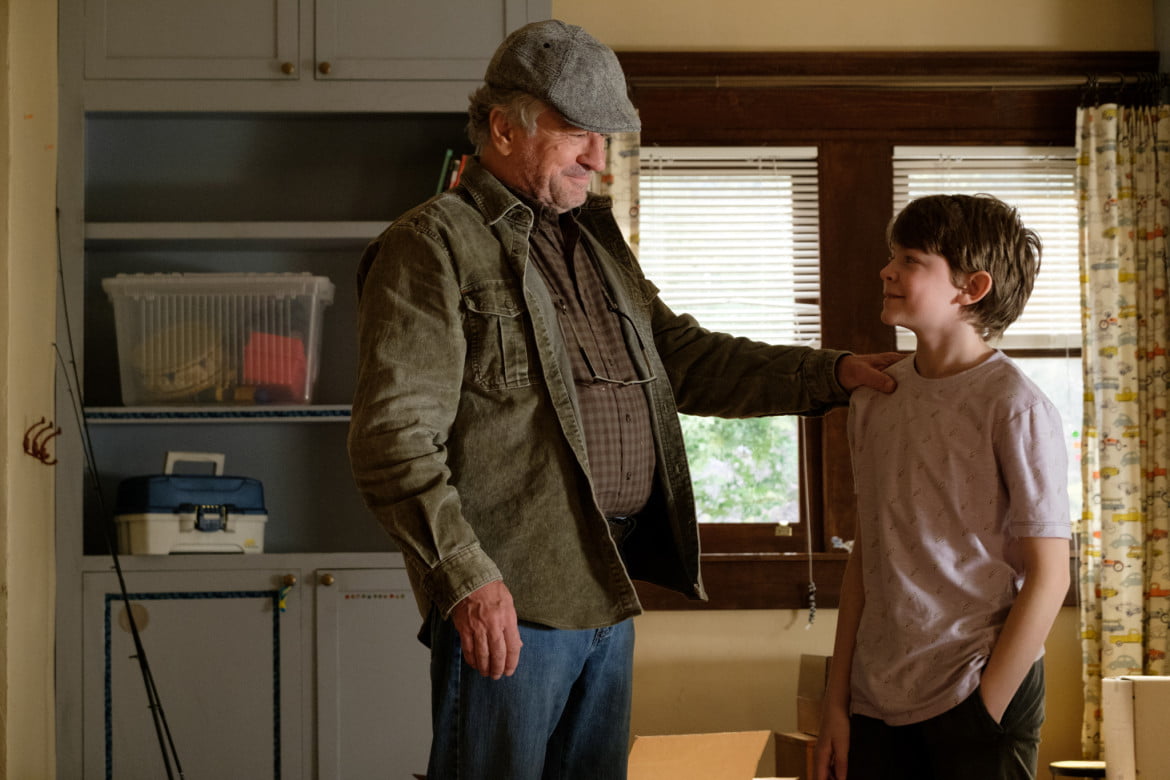 A passable bit of lighthearted family entertainment, the slapstick “battle of the ages” comedy The War with Grandpa requires all who watch it to tap into their inner tween. Looking a lot like a brightly coloured movie one would see on Nickelodeon on a weekend afternoon (complete with a mid-credits pop song music video/blooper reel), and boasting an astoundingly overqualified cast, The War with Grandpa is shut-your-brain-fully-off fun, but it also boasts a smidgen of perceptiveness about growing up and growing old. This holiday season, if you’re burnt out on watching the Home Alone movies for the ten billionth time, The War with Grandpa will nicely satisfy.

Sally Decker (Uma Thurman) is growing concerned that her elderly, widowed, and cantankerous father, Ed (Robert De Niro), can’t take care of himself. She begs dad to move in with her architect husband (Rob Riggle) and three kids. Not seeing any choice in the matter, Ed begrudgingly agrees, but the old man doesn’t know that his arrival will spark an unforeseen conflict. Middle child Peter (Oakes Fegley) just started sixth grade, and all he wants after a day of being picked on by older kids is to come home, play video games, and enjoy his room. Ed’s arrival forces Peter to move out of his bedroom and into the attic, which has a leaky roof directly above his bed and any assortment of critters hanging about. Already overlooked by mom and dad – who spend more time agonizing over his teenage, boy crazy older sister (Laura Marano, who also sings the aforementioned music video) and their Christmas obsessed youngest (Poppy Gagnon) – Peter sees Ed’s “imposing” as a declaration of war.

The War with Grandpa (which sat on the shelf for the better part of several years, due to American distributor issues) is one of those stories based around an increasingly contentious prank war, and like many films built around similar gambits, it’s best not to think about the logic and mechanics of everything that happens. Peter and Ed start out with microaggressions (marbles spilling everywhere, hot sauce in the coffee, switching out essays) and escalate to using drones, snakes, hidden airbags, and even the desecration of a corpse. Like I said, it’s best not to think about it too much. Is it in bad taste to watch a young child and a senior citizen constantly embarrassing and tormenting each other? Perhaps, but it’s also amusing to watch when viewed with childish sensibilities. At least there aren’t any fart, poop, pee, or puke jokes, which means some miniscule degree of thought and care went into The War with Grandpa. It’s a film that doesn’t want to please the lowest common denominator, but rather anyone who thinks these sorts of gags are funny. 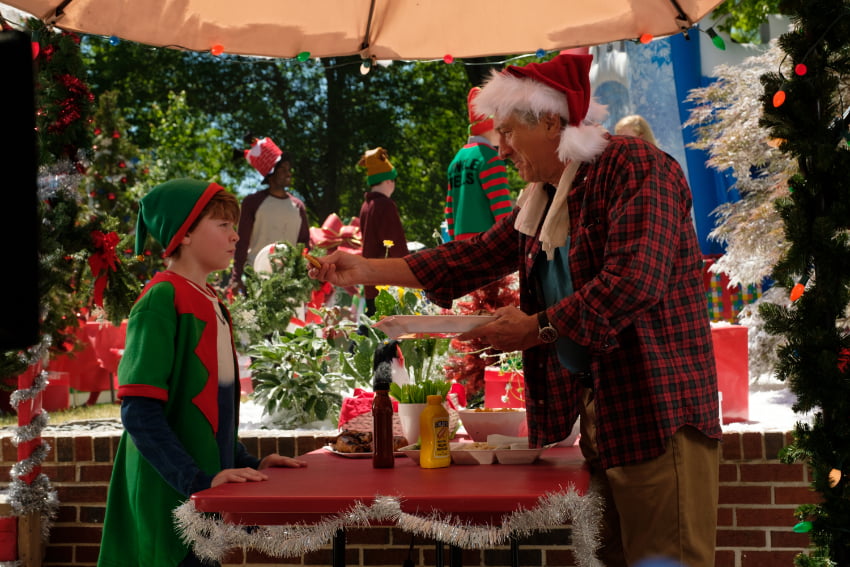 The silliness isn’t all that inspired, but director Tim Hill (Alvin and the Chipmunks, Muppets from Space) and screenwriters Tom J. Astle and Matt Ember (Get Smart, Failure to Launch) deliver a breezily enjoyable adaptation of Robert Kimmel Smith’s young adult novel. When gifted a cast like they have, much of the heavy lifting is done for the filmmakers, even if the stars on screen are only working at half capacity. De Niro is a great sport, and Fegley is a fine young actor, so their antagonistic chemistry makes the shenanigans easy to buy into. De Niro also shares some great scenes with a trio of age appropriate buddies, played by Cheech Marin, Jane Seymour, and, most memorably, Christopher Walken, as an energetic old man with the mancave of a twenty-five year old. And while it’s strange to see Thurman popping up in something this generic and low-aiming, she more than rises to the challenge by wholeheartedly embracing the silliness at the heart of her high strung character.

The War with Grandpa isn’t big on plot development, with the film packing on more unresolvable subplots than it knows what to do with. Peter’s friends and all of their problems are bland and forgettable. Nothing comes of the father trying to find meaning in his soul crushing job. The older sister’s relationship to a boyfriend mom can’t stand is predictable and tacked on. Even all the talk of Ed’s unresolved grief following the death of his wife goes precisely nowhere. The War with Grandpa is at its best when it sticks to being a silly romp, and screeches to a halt whenever it tries to imbue the supporting characters with any degree of sincerity or depth. The War with Grandpa, which boasts more than a few dodgy editorial scars, also plays like a project that has been chopped down from something that was much longer at one point.

While the assembly isn’t perfect, the “less is more” approach to plotting ultimately works in favour of The War with Grandpa. The core dynamic shared by Fegley and De Niro is more than enough to keep things afloat, and it’s a nicely written one. Fegley and the script aren’t afraid to portray Peter as a jerk, like many young boys are at that age. De Niro gets to play the more sympathetic of the two, preferring to play Ed as someone who’s calm and charming most of the time, but can fly into a rage whenever cornered or questioned about his decisions and abilities. Their battles are unique in that there’s clearly a deep love and begrudging respect shared between Peter and Ed, even when they’re both at their worst. The War with Grandpa is built around two characters more alike than either would like to admit. They have anger issues. They hate change. They like to hang onto the past. They value their autonomy and privacy. The younger one wants to be treated like an adult, and the elderly one wants everyone to stop treating him like a child. These character beats and quirks are just enough to keep The War with Grandpa engaging beyond its juvenile gags.

But let’s be honest here: the core audience of The War with Grandpa is coming for the gags. If nothing else, The War with Grandpa gave me two things I never knew I wanted to see in a film: Marin hitting the story’s most annoying character in the nuts with a dodgeball and Walken stumbling around as a punch-drunk Santa following a prank gone wrong. Those two moments alone are worth a single point each, but, on the whole, The War with Grandpa is made better by the fact that it doesn’t phone in all of its silliness.

The War with Grandpa is now available for digital purchase in Canada. It is also still showing in select cinemas. If seeing a film in theatres, please take all necessary precautions. Wear a mask, practice social distancing, and stay home if feeling ill. The War with Grandpa will be available on VOD, DVD, and Blu-Ray on Tuesday, December 22. 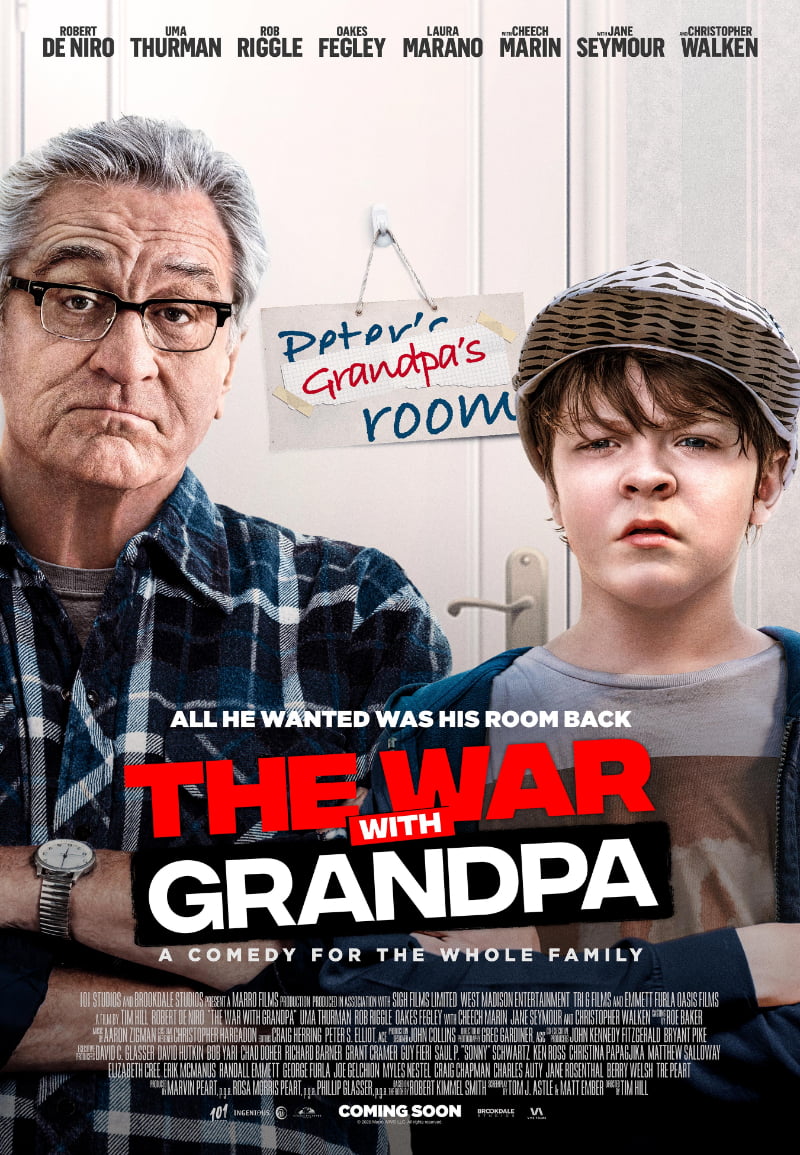