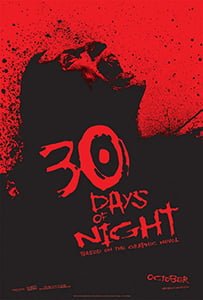 Vampire movies may not be rare, but the good ones certainly are, and as a fan of the genre I have to admit that I had high hopes for 30 Days of Night to come in and shake things up a bit.

After all, it’s been about four years since the last decent bloodsucking movie, the werewolf meets vampire film Underworld, and that was more of an action film than anything else. Looking back over the last 20 years of vampire movies you’ll notice a lot of fang-in-cheek films, with Bram Stoker’s Dracula standing out as one of the few prize films.

With 30 Days of Night, there could have been a revolution of fang-on-neck action, but one thing is missing: the fear.

Based on Steve Niles‘ graphic novel of the same name, 30 Days of Night is set in Barrow, Alaska where the winter sun sets every year for a month. As you can imagine, that makes Barrow ripe territory for a vicious group of vampires to invade, and it doesn’t hurt that nothing stands out on snow quite like a fresh splash of some unlucky person’s blood.

Josh Hartnett stars in the film as Eben, the town sheriff who finds a trail of strange incidents leading up to total mayhem in the town. Through the events he’s thrust together with his estranged wife Stella, played by Melissa George. The two work together to survive the month of darkness as the vampires invade the town and begin feeding on anyone in sight. 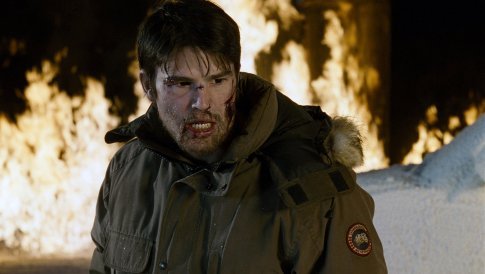 Josh Hartnett in 30 Days of Night

In a technical sense, the film looks good. There are fresh camera angles, interesting landscapes, and decent special effects. The editing is acceptable, the soundtrack is good, and even the sound editing will have you jumping in your seat a few times.

The actors are also pretty good. Hartnett and George don’t have much chemistry, but they’re good together, and most of the vampires look the part.

30 Days of Night fails as a story though, and doesn’t know what speed it wants to move in, doesn’t know how to pace the series of events that make the film interesting, and have some of the least impressive vampires ever put on screen. Sure, they’re kind of creepy and disturbing, and they rip people’s necks apart, but there’s no psychological depth to their terror. They can’t even seem to hunt down their prey unless the person is walking down the street, or running around the town screaming.

The film also lacks any sense of surprise. The concept of the film gives away a lot of what’s happening and the vampires have no other master plan than to run around and eat people. I’m sure the filmmakers wanted these vampires to be different, so they don’t sneak around or really even hunt like you see in some movies, but in making them different, they also made them boring.

I think the term I’m looking for here is predictable. A film can try and be unconventional, but by ignoring everything that actually makes a movie scary they ended up taking the proverbial bite out of 30 Days of Night.

And don’t even get me started on the ridiculous final battle and the clichéd ending.

30 Days of Night might have a spectacular premise, but the delivery is truly awful, and the script is a toothless that won’t excite any true fans of horror films.