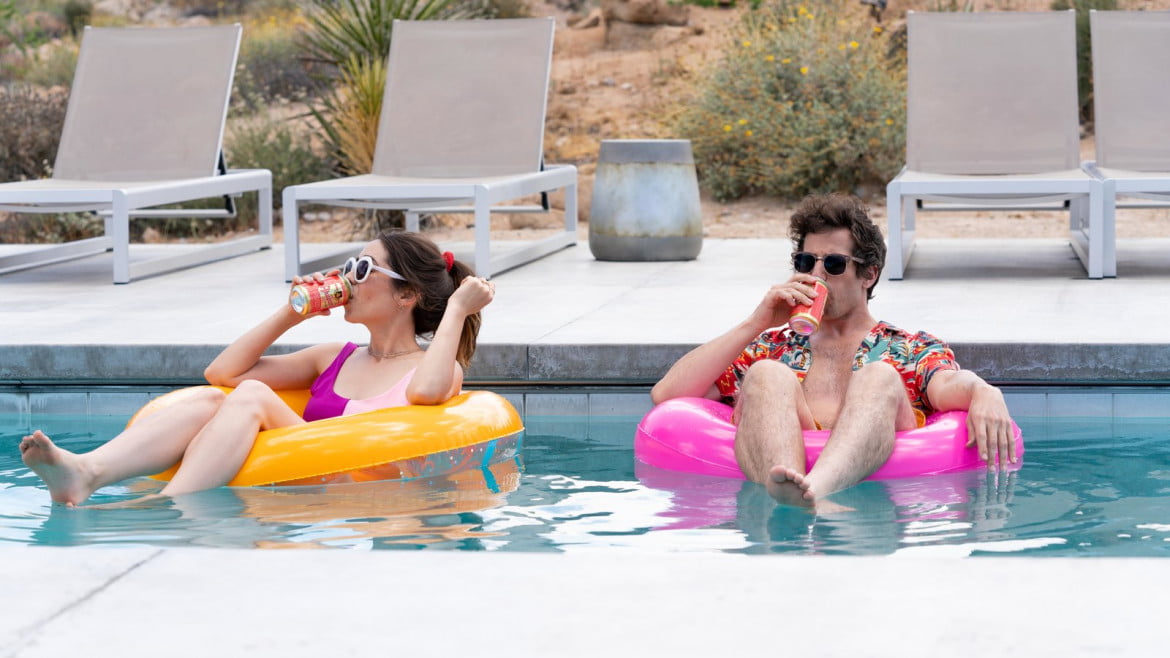 Palm Springs is a rom-com for nihilists, and I mean that as a positive. Deliberately cynical and boasting just enough sweetness to keep things likable, Palm Springs is a delicate mash-up of meet-cute and time looping tropes that works rather well, even though the film constantly feels like it’s about to fall apart at any moment. A clever spin on characters who live out every day as if it were their last, Palm Springs is a film that acts as if it doesn’t care about anything, when in reality, it cares very much.

It’s November 9th, and Tala (Camila Mendes) and her fiance, Abe (Tyler Hoechlin), are due to get married at a posh resort in the California desert, but Palm Springs isn’t about either of them. At the wedding, Sarah (Cristin Milioti), Tala’s legendarily unreliable sister and maid-of-honour, has too much to drink and flakes out on her duties at the reception. Her spot as toastmaker is extemporaneously taken by Nyles (Andy Samberg), the equally drunk, but more well put together boyfriend of Sarah’s other sister, Misty (Meredith Hagner). The two hit it off famously, but at the end of a very bizarre pseudo-date – one that involves Nyles getting hideously injured – Sarah awakens the next day to discover that it’s the same day as the last. Nyles, who has seemingly been stuck in this time loop for years, has dragged Sarah into the perpetual living hell of reliving the wedding day over and over again. Although initially furious and shocked, Sarah begins to see the possibilities and positives in reliving the same day for the rest of her life.

Director Max Barbakow and screenwriter/frequent collaborator Andy Siara borrow heavily and openly from the likes of Groundhog Day and the Happy Death Day films before them (with Sarah’s ultimate solution to their conundrum coming almost directly from the sequel to the latter), but Palm Springs uses these heady, genre friendly concepts to examine two people who seemed broken and directionless before they were thrust into their current situation. The problem with adopting such a specific high concept story is that the ultimate dynamics aren’t all that surprising. They’ll both try to kill themselves out of despair. They’ll talk about the various reasons why they can’t escape and theorize about karma and quantum physics. They’ll accept their new normal. Since nothing matters and there won’t be any long term consequences for their actions, they’re free to say and do whatever they want.

None of these developments are much of a surprise, but it’s fun to watch people gleefully start fights, crash planes, and squat at the luxury homes of others simply because they can do so without repercussions. In a year such as this, Palm Springs feels rather quaint; a look into the power one gets from isolating themselves and truly not giving a shit. Before things take a necessarily serious turn – one that doesn’t entirely work – Palm Springs is a charming bit of cinematic comfort food. 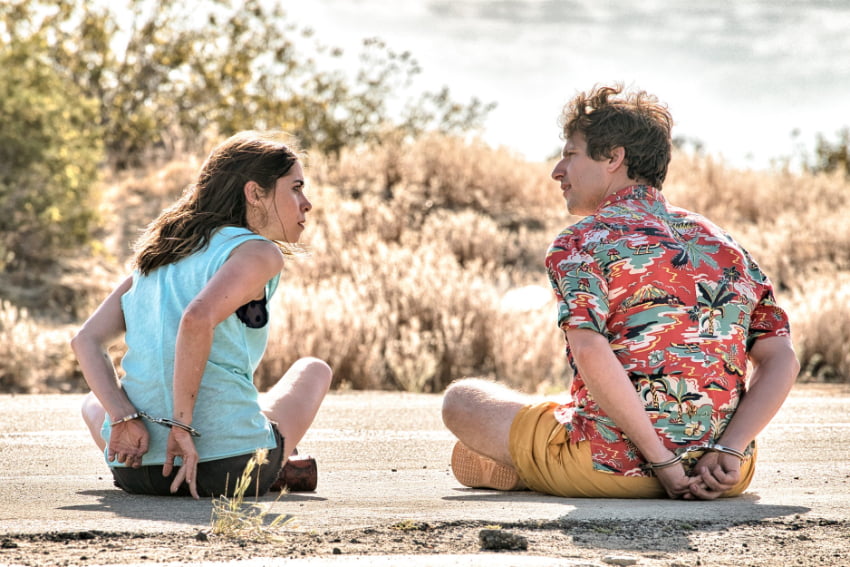 The reason Barbakow and Siara’s tonal pivot doesn’t fully stick once a wedge is driven between the increasingly romantic Nyles and Sarah is because the characters aren’t intriguingly developed. While Nyles might have genuinely forgotten who he was over his long time spent in his own idea of purgatory, all that’s known about Sarah is that she’s a hot mess who’s keeping a major secret from her bride-to-be sister. If more was known about Sarah and the reasons why she feels lost and abandoned before Palm Springs suddenly decides to become dramatic, it would be a much more successful film. What saves Palm Springs during this rough patch is some disarmingly credible dramatic acting from the usually silly Samberg. If it weren’t for Samberg’s ability to play desperation so well, Palm Springs would probably float off like a tumbleweed just past the halfway point.

The main attraction to Palm Springs – outside of some gorgeously captured desert landscapes – is the cast. The romantic, comedic, and antagonistic chemistry between Samberg and Milioti is on point. There are some nice, but perhaps all too brief character roles for Peter Gallagher as the father of the bride and June Squibb as a mysterious aunt who keeps lurking around the reception. But the biggest scene stealer here is J.K. Simmons, who gives his comedic and dramatic all to his role as Roy, another fellow time looper and wedding guest who wants to kill Nyles for dragging him into this mess. Palm Springs boasts Samberg’s best performance to date, offers up a star-making turn for Milioti, and surrounds them with ample support.

Unlike many films built around purposefully repetitive variations on a premise, Palm Springs remains entertaining, even when the plot in question isn’t as clever as it initially appears. I watched Palm Springs a second time, and while there were certainly clues throughout that were missed the first time around, there wasn’t much to be gleaned from another viewing. I briefly wondered if I actually like Palm Springs, and if that really was all there is to this. Ultimately, I can’t argue with a good, well acted time, and a film has to be graded on what it is, rather than what the viewer was hoping it would be. And by almost all other standards, Palm Springs is a good movie.

Palm Springs is available to stream in Canada on Amazon Prime Video starting on Friday, December 18, 2020. 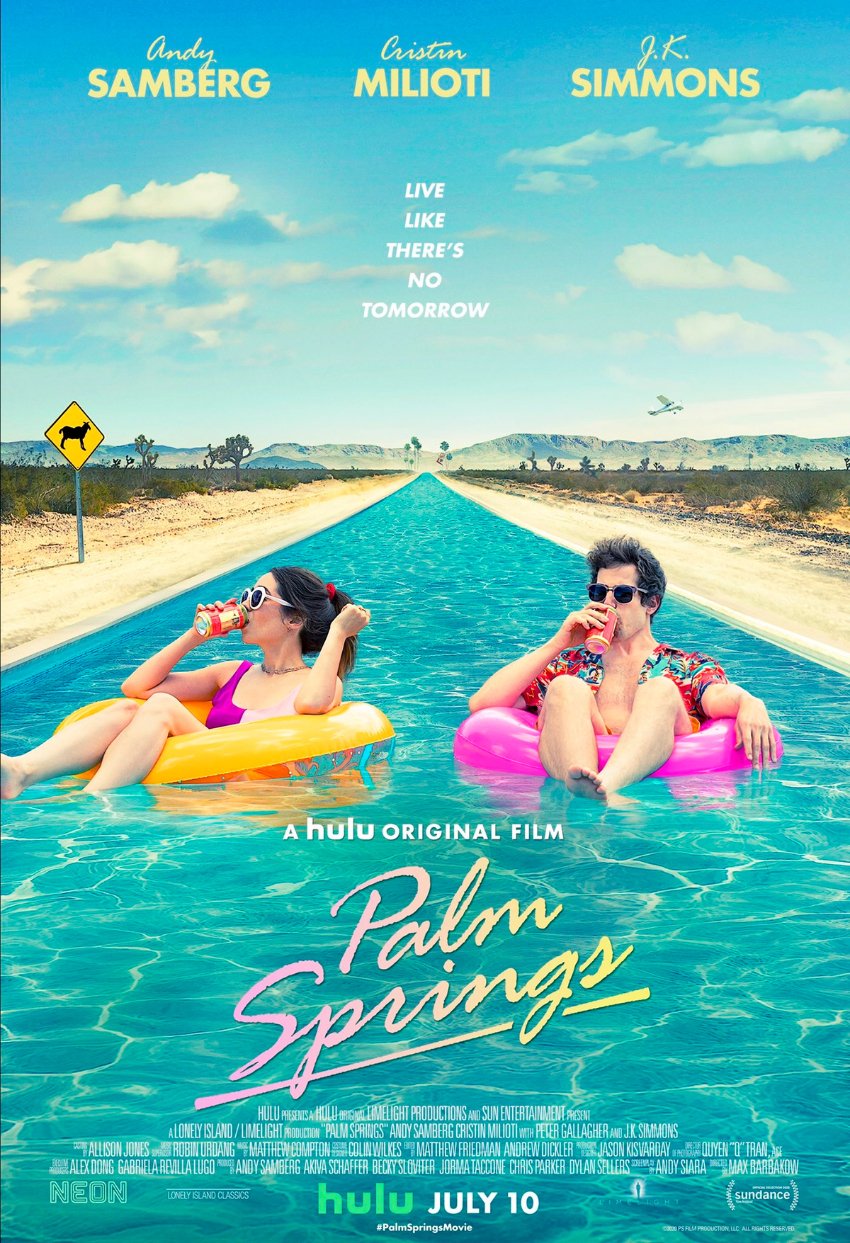