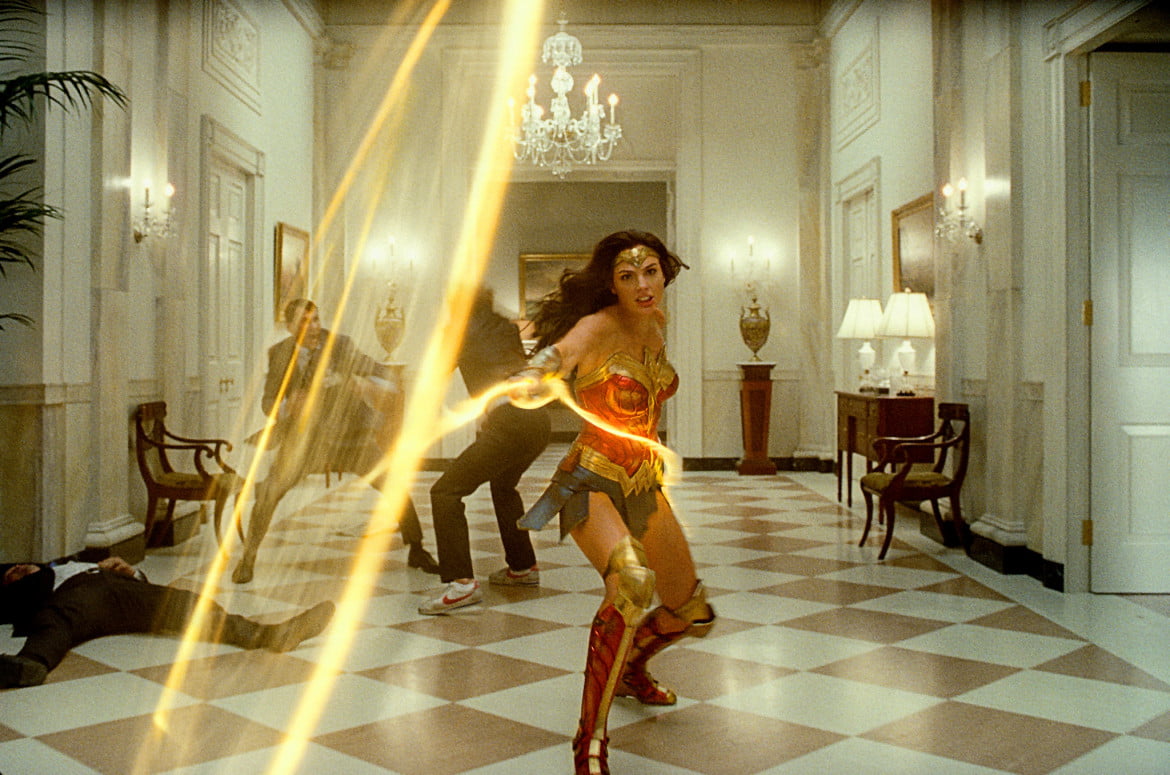 Balancing cleverness, simplicity, and a clear-headed vision, Wonder Woman 1984 is an unexpected surprise.  Preferring a slow burning, character based approach to storytelling over simplistic, crowd pleasing spectacle, returning director and co-writer Patty Jenkins has delivered a popcorn movie for audiences young and old that values their intelligence. Refusing to cater to nostalgia or the overstuffed machinations of most superhero movies, Wonder Woman 1984 runs the risk of alienating its core audience, but thankfully delivers an assured, thoughtful, and yes, fun sequel.

Amazon warrior Diana Prince (Gal Gadot), now several decades removed from the events of the previous film, works as a well respected researcher and curator for the Smithsonian in Washington D.C., while thwarting crime on the side in her spare time. Although Diana seems happy, she still harbours feelings of love and loss towards presumably deceased beau, Steve Trevor (Chris Pine). One day, an antique heist thwarted by Wonder Woman intersects with Diana’s day job, when the FBI asks fellow Smithsonian researcher Barbara Minerva (Kristen Wiig) to analyze a mysterious artifact recovered from the bad guys. The item in question turns out to be a “wishstone,” capable of making the biggest desire of its holder come true, but taking away whatever they value most in the process. The intended recipient of the stone was Max Lord (Pedro Pascal), a huckster whose oil drilling ponzi scheme is on the verge of collapsing. Before they truly know what the stone and Lord are capable of doing with such power, Diane and Barbara make wishes of their own that will change their lives for better and worse.

Wonder Woman 1984 begins with a one-two punch of cleverly realized action sequences; one an Amazon decathlon of sorts involving young Diana, the other a whimsically crafted bit of heroism in a busy shopping mall. From there, Jenkins slows things down for the better part of ninety minutes, which might be a lot to ask of audiences that might be expecting a nonstop two-and-a-half-hour thrill ride. But Jenkins and co-writers Geoff Johns and Dave Callaham are more focused on crafting detailed characters and situations rather than letting its admittedly simple plot serve as a backdrop for strung together action sequences.

The story in Wonder Woman 1984 is admittedly limp when viewed in general terms. This is another “monkey’s paw” situation, as one character literally spells out in self-aware terms. Be careful what you wish for. You can’t change the past. Be yourself because everyone else is taken. No matter how bad things get, you are loved. With great power comes great responsibility. Your health is the one thing you can’t get back. All of these messages intersect in Wonder Woman 1984, and their overall outcomes aren’t surprising, but Jenkins wisely makes viewers care about them as if they were new and fresh concepts. The trick to Jenkins’ success lies in the fact that Wonder Woman 1984 treats its characters more like human beings and less like cartoons in outlandish situations. 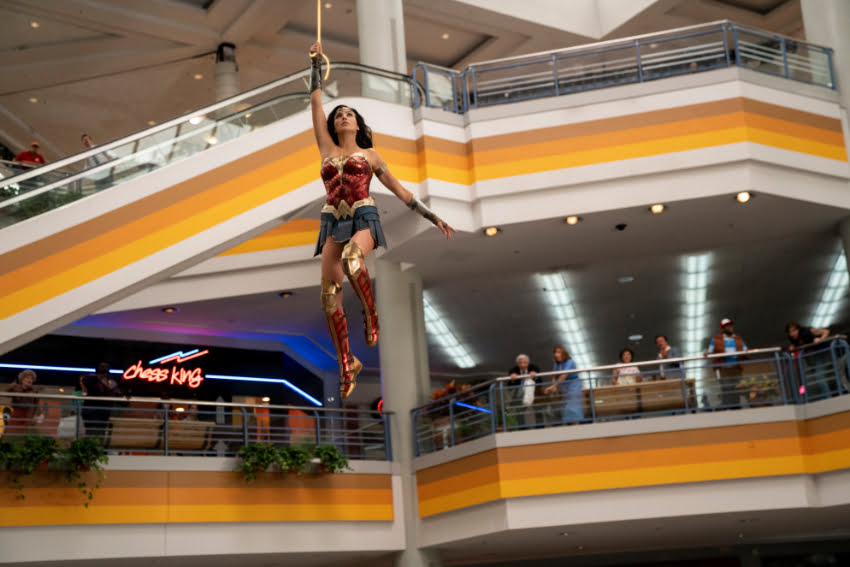 During the film’s less pulse quickening moments, Jenkins and her cast spend a great deal of time and care deconstructing these characters. It’s something that Tim Burton’s Batman films, Sam Raimi’s Spider-man 2, and the Iron Man films did extremely well, and yet many superhero films tend to forego this approach in favour of seeing how many convoluted plot details they can stuff into a single film. While it never approaches full on camp and never takes itself as seriously a Christopher Nolan superhero movie, Wonder Woman 1984 makes a keen presumption about blockbuster filmmaking: while audiences come to have a good time, that fleeting sense of fun means nothing if the characters aren’t worth following. A case can be made that Wonder Woman 1984 – while still a studio driven blockbuster and part of a larger franchise – is one of the more compelling character dramas of the year.

Gadot once again exudes effortless charm, and finds an exceptional scene partner in the always affable Pine, whose character is resurrected in an intriguing, unexpected fashion that’s novel instead of feeling forced. Wiig is a perfect choice for playing an overlooked wallflower who gradually and frighteningly becomes unhinged after discovering a newfound sense of confidence and power. But the most intriguing of the bunch is Pascal’s villain, a power-hungry Lex Luthor/Donald Trump type that always rides the line between over-the-top theatricality and deadly seriousness. Looking like a cross between Ronald Reagan and Jeremy Renner’s character in American Hustle, Pascal plays Max Lord’s two biggest settings – megalomania and desperation – in tandem instead of bouncing between the two. Max Lord is a goof, but he’s a dangerous goof that could destroy the entire planet. Now where have I seen that before?

The problems of these characters might not be relatable outside of the broadest of strokes, and Wonder Woman 1984 might be a slight step down from its predecessor as a result, but Jenkins keeps things compelling by refusing to throw distractions at the audience. For a film set in a decade as eye-catching as the 1980s, Jenkins’ latest keeps the nostalgic references to a bare minimum. Most of the 80s gags revolve around art and fashion, and there’s only a single major pop song to be found, one that wasn’t even a huge hit and is used more to set a scene than to goose the audience. Hans Zimmer’s score is keeping things subtle in its nostalgic leanings, as well, offering musical accompaniment that feels more in line with Back to the Future or the Indiana Jones films than anything electronic or modernist in nature.  It wants to move and sound like a film that was made in the 1980s, not one that’s merely paying homage to the decade. Similarly, while the film’s action sequences are spectacular, the character development isn’t lost in the chaos. If a scene doesn’t directly impact the journey of the characters, Jenkins doesn’t include it.

At the end of the day, Wonder Woman 1984 is still not much more than a popcorn film, but it’s one that reminds viewers how these sorts of blockbusters should be made: with time, care, and loving effort. It stands on its own merits and owns up to the fact that the plot is built on time-tested superhero tropes. It gives viewers more or less what they want (unless they were hoping for lots of neon, synths, and a poppy soundtrack) in the best possible way.

Wonder Woman 1984 opens in select theatres and on premium VOD across Canada on Friday, December 25, 2020. If seeing a film in cinemas, please take all necessary precautions. Wear a mask, practice social distancing, and stay home if feeling ill.