From their quirky origins with their first feature, Toy Story, to the joy and humour of Wall-E, and the magic of Coco, Pixar is a fascinating studio that’s evolved over the years. Soul is their latest in that evolution, and it’s a charming, funny, and musical story about passion, mentorship, and what makes life livable.

Streaming Christmas day on Disney+, Pixar’s Soul is a heartfelt comedy, and a love letter to jazz. The film feels like a jazz riff that starts out shakily, and gets better as the musicians find their groove, and purpose.

Jamie Foxx stars as Joe Gardner, a school music teacher who has been dreaming of becoming a stage musician since he was a teenager. When he finally gets his big break, with the great Dorothea Williams, there’s just one catch–he falls in a manhole and passes to “The Great Beyond.”

Escaping the escalator to whatever lays beyond, Joe lands in “The Great Before” where he’s mistaken for a mentor, one of the souls who lead new souls to find their spark so they can be sent to Earth. Paired up with the troublesome 22, voiced by Tina Fey, they come up with a scheme so 22 can stay in The Great Before and Joe can get back to his life, but things don’t go as planned.

Directed by Pete Docter, Soul is cheerful, sweet, funny, and just a bit manic. Foxx and Fey have a great energy together, and the script is smart.

And Soul is a music lovers film from the start. The film is beautiful in the way it shows music, and passion, and music is at the heart of what makes Soul so enjoyable.

There are a lot of great touches throughout Soul too. The Great Before feels abstract and filled with light, with a sense of humour that lifts the film. Joe’s journey briefly back through his own life, outside his body, offers some of the greatest moments of the film. I loved every minute with his student; Dez, his barber; and his mother, Libba, while he pushed 22 to get everything together before the big gig with Dorothea.

Donnell Rawlings as Dez, in particular, is one of my favourite moments in the film. Rawlings is perfect, and Dez has so much story, and character, and soul that I’d love to see more of him. Outside of Dorothea Williams, he’s one of the most mesmerizing characters in the film.

And Angela Bassett steals every scene she’s in as Dorothea. The part may be small, but she’s a fantastic character, and Bassett captures the essence of the jazz diva.

Not everything about Soul works though. Joe goes through a lot of realities, and that makes the story feel awkward at times. That works, in a way, to make the film feel like a journey, but places like The Zone don’t add much to the story. The character Moonwind, played by Graham Norton, is fun and airy, but I wish the script had focused on fleshing out more of who Joe is, rather than introducing other characters.

That’s ultimately the biggest hole in the story: who is Joe? What makes him a great musician? Who is he aside from a great teacher and passionate jazz musician? And for that matter, who is Dorothea, aside from someone Joe admires?

Joe’s accident also feels like a punchline to a gag that’s neither all that funny, or poignant. And while the You Seminar gives Joe and 22 a purpose, and adds some levity to the story, there is something about the abstract reality that just felt empty to me. One look at the lushness of Coco‘s afterworld makes Soul‘s “Great Before” just feel like things are missing, and while that may be the point, it doesn’t lend anything to the film or story.

Despite those few flaws, Soul swept me along with it. There’s a little bit of an All of Me (the 1984 film, starring Lilly Tomlin and Steve Martin) vibe in the middle, and Foxx and Fey are eloquent, and fun together. The film’s metaphor about teaching, and being a mentor, are also clever,

On top of everything else, the score by Trent Reznor and Atticus Ross, and the incredible jazz by Jon Batiste, really give Soul the right vibe. 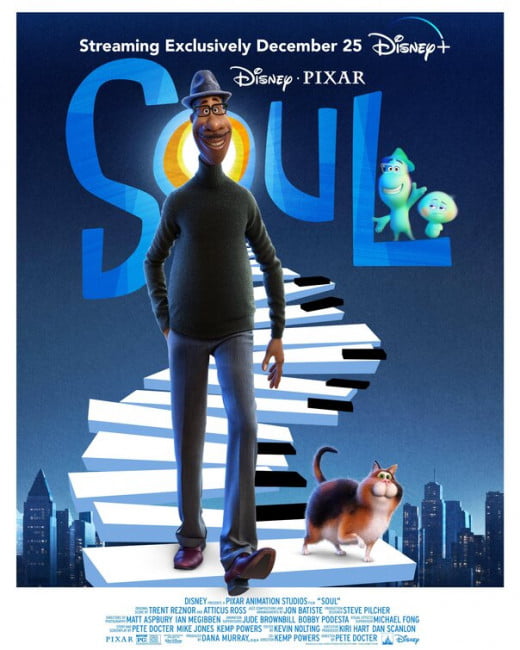