Film Friday: ‘The Proposal’ & ‘Year One’ 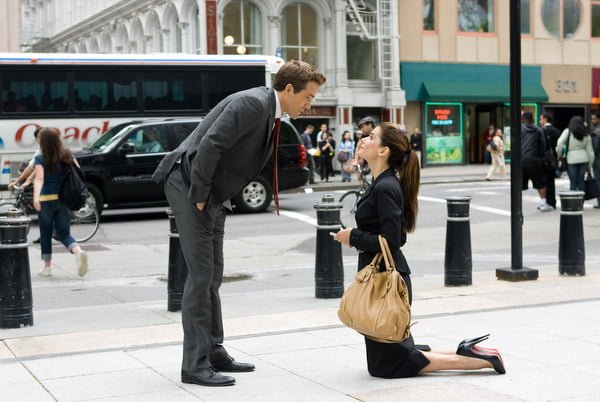 Ryan Reynolds and Sandra Bullock in The Proposal

Opening this week in theatres, Sandra Bullock and Ryan Reynolds get friendly in the romantic comedy The Proposal, Jack Black and Michael Cera play dumb in the stone age comedy Year One, and maybe most importantly, there is the somewhat scary but essential documentary Food, Inc.

The Proposal
Perennial romantic comedy star Sandra Bullock returns to her favorite genre, and not to be disparaging in the least, it’s where she belongs.

In The Proposal Bullock plays Margaret, a book editor who dreams up a sham marriage to her assistant Andrew, played by Ryan Reynolds, who would rather start a pretend relationship than end up deported to Canada.

The twist, and of course there always is one, is that Margaret has tormented Andrew for years and years, so when she’s forced to play lovey-dovey, and meet his weird Alaskan family, things quickly get even weirder.

Betty White, Mary Steenburgen, and Craig T. Nelson co-star as Andrew’s wonky family, all actors who I can only say sell this film even more for me. The Proposal was also directed by Anne Fletcher, who previously made the rom-com hit 27 Dresses, and the dance film Step Up.

Although there have been a lot of bad reviews for the film, because critics say that the story has been done to death, I think the question is whether the film was done right.

As Roger Ebert of the Chicago Sun-Times said in his review, “The Proposal recycles a plot that was already old when Tracy and Hepburn were trying it out. You see it coming from a great distance away. As it draws closer, you don’t duck out of the way, because it is so cheerfully done, you don’t mind being hit by it.”

That said, the negative reviews are many, and somewhat scathing, pointing out a number of flaws in the film.

Considering how charming both Bullock and Reynolds are, I’m betting the film is still worth watching, you may just have to decide whether it’s worth the big screen bucks, or if you can wait for it on DVD.

Year One
In all honesty, there have been few films that I have wanted to see less than Year One. This film, which stars Jack Black and Michael Cera as bumbling idiots in ancient times, looks like the laziest of comedies, a feat we seem to see a lot from Black.

Produced by Judd Apatow, the film was directed by Harold Ramis, who has honestly made some of my favorite comedies, like Bedazzled, Groundhog Day, and Caddyshack. Year One was also written by Ramis, and The Office scribes Gene Stupnitsky and Lee Eisenberg.

While I hate to bash Ramis, it seems inescapable with Year One. The film has Cera and Black playing Zed and Oh, two average, do-nothing guys who are banished from their village and set out on a journey through the days of Moses, Cain and Abel, and Abraham.

Prior to release Columbia Pictures have been really sketchy about the film’s plot, or if there even is a plot, but apparently the film peeks in to a lot of Biblical stories, with actors like Hank Azaria, Paul Rudd, and David Cross playing the various characters they meet along the road. Ramis also makes an appearance as Adam.

Over at RottenTomatoes.com, the film is definitely coming in rotten, ranking just 25% fresh on the meter.

Critic Michael O’Sullivan of the Washington Post called Year One, “A lowbrow, only fitfully amusing comedy.”

It was Ty Burr of the Boston Globe who points out my biggest problem with the film though.

“Any good will the movie generates,” Burr wrote, “is grated right back off by Black, whose obnoxiousness has lost whatever charm it once possessed.”

Frankly, I don’t think Black has done charming in about ten years, but I’ll admit this – when I think Neanderthal, he fits the bill, but I’m not sure that’s a selling point for the film.

Food, Inc.
Also debuting this week is the documentary Food, Inc., which looks at the negative effects industrialization has had on the food production and grocery industry, not to mention our eating habits.

I previously talked about the film in last week’s column, but I wanted to remind readers again that it’s opening in a number of theatres this weekend. It is also a very well-reviewed documentary, with many of the major critics calling it a must see.

As Steven Rea of the Philadelphia Inquirer wrote, “It’s not a pretty picture. But Food, Inc. is an essential one.”