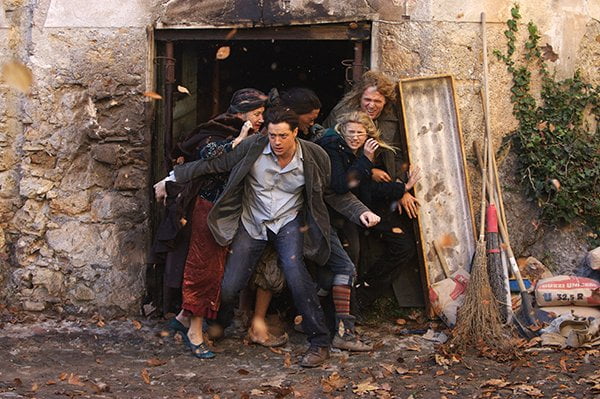 New on DVD, Cornelia Funke’s Inkheart comes alive on screen with Brendan Fraser playing the unfortunately gifted man who finds out that he can bring characters to life from the pages of any book. Also new this week, Steve Martin stars in the shoddy sequel, The Pink Panther 2, and Isla Fischer toys with financial ruin in Confessions Of A Shopaholic.

Brendan Fraser and Eliza Bennett star as Mo and Meggie, two book fanatics with a strange ability: they can bring fictional characters to life. The problem is that when a character is brought out of a book, a person must take their place in the story, and years ago Mo lost his wife inside a book called Inkheart when he inadvertently let three characters loose from its pages.

When Mo rediscovers the book again, he attempts to rescue his wife from the book, but instead gets caught up in a scheme by one of Inkheart’s minor villain’s, the dastardly Capricorn, played by Andy Serkis. Taking Meggie hostage, Capricorn forces Mo to help him, and promptly burns the book so he can never be sent back within its pages.

With a little help from an old friend though, and his silver tongue, Mo might have an idea how he can set things right.

Directed by Iain Softley, who brought K-Pax to the screen in 2001, Inkheart is an entertaining film, but certainly one that could have tried a bit harder. For the most part, the problem seems to be that Softley and the studio wanted to make a simple children’s story, but it feels like that is actually a huge disservice to the source material.

Having never read the book, I can’t speak for its virtues, but the concept feels like there was a lot more to explore, and this film simply does nothing with that vivid imagination. The special effects are respectable enough, but that is about the only thing I can praise.

Even the acting by Fraser and some of the key cast feels half-hearted. Bennett and co-star Paul Bettany as Dustfinger are the only actors who really seem to find something within this script and bring it to life.

Families with younger children may want to check out Inkheart for the cute animals and the adventurous storyline, but it sadly takes patience for anyone looking for more.

After Cheaper by the Dozen 2 and the first Pink Panther, it’s getting a bit hard to believe he’s not stuck in a smoking, burning wreck of a career crash.

The film stars Isla Fischer as an obsessed shopper named Rebecca who has a dream; she wants to work for an upscale fashion magazine. The question is, how can she make it happen?

Playing the current climate to great effect, Confessions Of A Shopaholic may be entertaining for some, but the reviews are nothing short of awful. Rotten Tomatoes has the film at just 23% fresh, and a mere 9% by the top critics, with most reviewers pointing out that, for a comedy, the film is not very funny.

Also coming out this week on DVD…

Waltz With Bashir
Nominated for an Academy Award for Best Foreign Language Film, Waltz With Bashir is an animated documentary that looks back at the 1982 Lebanon War through the eyes of a young soldier. Directed by Ari Folman, the film is told through his perspective as he remembers a horrific night during the battles.

Crossing Over
Lastly, the abysmally reviewed Crossing Over weaves stories of people fighting to remain in the United States as they cross paths with the stringent immigration laws. Harrison Ford stars as an officer in charge of enforcing the law, who realizes he has more than a few problems with how some people are mistreated.

Rick Groen of the Globe and Mail was just one of many critics who dismissed the film. “All we get is a mess of good liberal intentions loosely anchored to a mass of pure Hollywood hokum,” Groen wrote.

“The film is so choppy, especially in the final going, it appears that entire reels have been cut,” Peter Howell wrote for the Toronto Star.