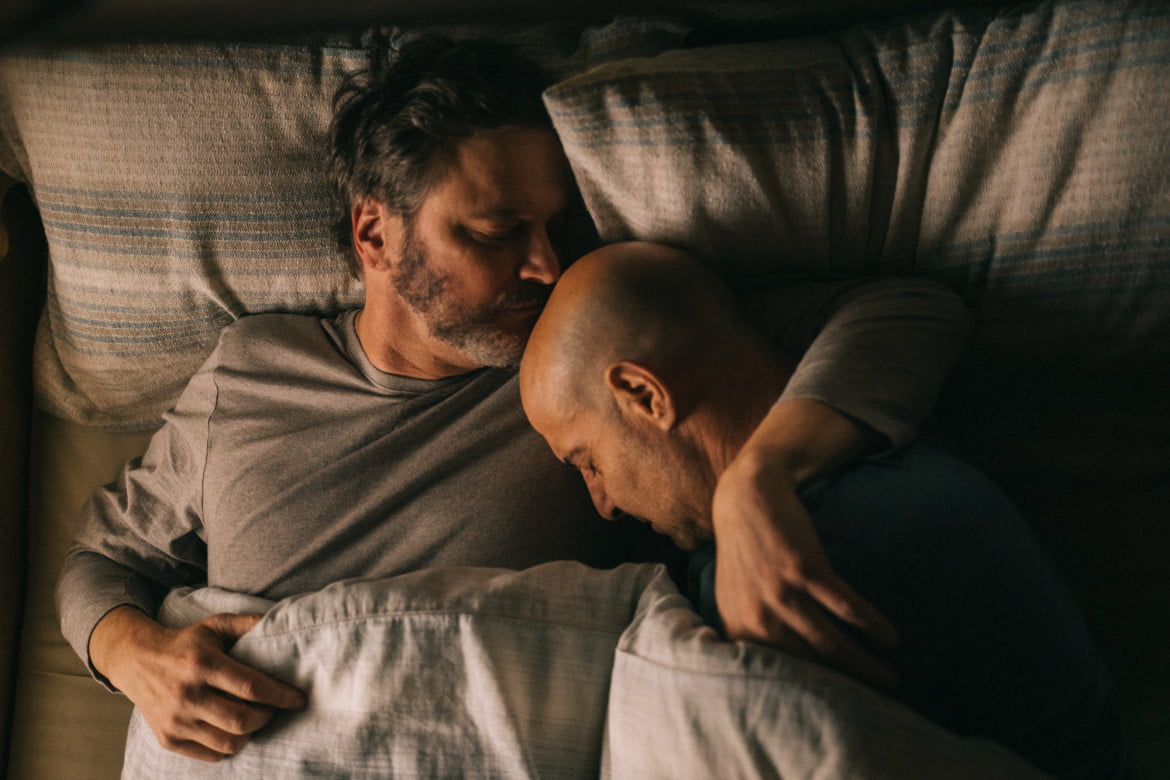 Supernova is an achingly beautiful, progressive, tender, morally complex, and empathetic love story that takes subject matter often reserved for television-movie-of-the-week fodder and turns it into something truly special and original. Aided immeasurably by leads Colin Firth and Stanley Tucci giving two of their career best performances, Supernova balances bitterness and sweetness to near perfection. Much like the road trip writer-director Harry Macqueen’s characters embark upon, Supernova is a story viewers won’t want to see come to an end.

Sam (Firth) and Tusker (Tucci) have been partners for the past twenty years, but their love is being put to the test these days. They’ve decided to pack up and travel across the UK in their RV with their dog, Ruby, visiting friends and sites of happy memories along the way. The reason for this trip is so Tusker – a former bestselling novelist and amateur astronomer – can experience these moments one final time. Tusker has been diagnosed with early onset dementia, and his condition is deteriorating more rapidly than expected. Sam – a famous musician who has put their career on hold for the moment – takes care of Tusker the best he can, with an eye towards a future when his love will require even more attention. Tusker doesn’t see much of a future. Without the ability to write his words, Tusker feels like nothing, and he also worries that Sam might be sacrificing too much for something that seems like a foregone conclusion.

Macqueen’s story is cut from similar cloths used by the likes of fellow filmmakers Ira Sachs and Andrew Haigh, and in some respects Supernova plays a bit like a more nuanced take on the similarly themed drama The Leisure Seeker from a few years back. Macqueen’s carefully worded material and direction allows his performers to make sure the silences between the characters are as potent as the dialogue. Supernova has a logline that makes it sound like another story of a couple struggling with a horrible, life altering affliction, but Macqueen and his cast want the viewer to take in everything that the characters are experiencing. They want people to admire the light coming between the trees at sunrise; to marvel at the enormity of a star pocked night sky; to enjoy watching cars zoom by a diner window along a motorway; to feel the warmth of a groggy early morning cuddle in bed. And Supernova also wants viewers to think about what these moments mean to those experiencing them, and the potentially the tragedy of not remembering what happened. Supernova isn’t a long movie, nor does it feel like one, but it does want viewers to savour the experience as long as possible.

Those luxuriant moments of quiet humanity play nicely with the inherent drama that comes with an inevitable loss of a loved one. While there are some cliched and obvious plot points to be found in Supernova (most notably one contained in a padded envelope marked “fragile’), Macqueen doesn’t belabour the more standardized beats of his story. Supernova focuses most intensely and poignantly on romantic tension and complicated characters rather than tear-jerking misery. Supernova is a bittersweet story by any metric, but it’s one that’s never showy or maudlin. The situation at hand feels realistic and fully formed, and never like a cinematically sanitized version of what could be a true to life tragedy for some.

Firth and Tucci are a flawless pairing, capable of showing love and frustration in equal amounts. Sam seems to be dragging out their trip to spend a maximum amount of time with a still mostly coherent and alert Tusker, all while looking towards future steps for his lover’s care. While Tusker is tormented by his condition, he’s equally disheartened to see Sam’s obvious lack of self-care. Tusker wants to use what’s left of his mind to remember Sam as the man he fell in love with, not as a doting caregiver. Both men are losing control over their carefully cultivated lives and have different thoughts on future steps. Sam wants their moments together to go on forever. Tusker just wants to live in the moment for as long as he can. The chemistry between Firth and Tucci is so natural and lived in that it’s impossible to say which of the two is better. It’s practically a tandem performance, which is what a great romance should feel like. Firth and Tucci play this couple as people who know each other so intimately that they’ve moved past finishing each other’s sentences. Now they can finish each other’s thoughts with a simple glance.

It spoils nothing to say that Supernova expectedly builds towards an inevitable reflection on the irreconcilable link between love and mortality, but the time with Sam and Tusker is well spent. The questions raised about the difference between seeing life as a series of memorable moments versus the value of living in the moment instead of in the past are intelligently and emotionally delivered by Macqueen and his cast. Supernova will leave many teary eyed by the end, but they’ll be grateful that they went on the journey.

Supernova is now available to rent on VOD in Canada. It will be available to view via digital TIFF Bell Lightbox starting Friday, February 19. It is also currently playing in select cinemas, where available. If seeing a film in theatres, please take all necessary precautions. Wear a mask, practice social distancing, and stay home if feeling ill. 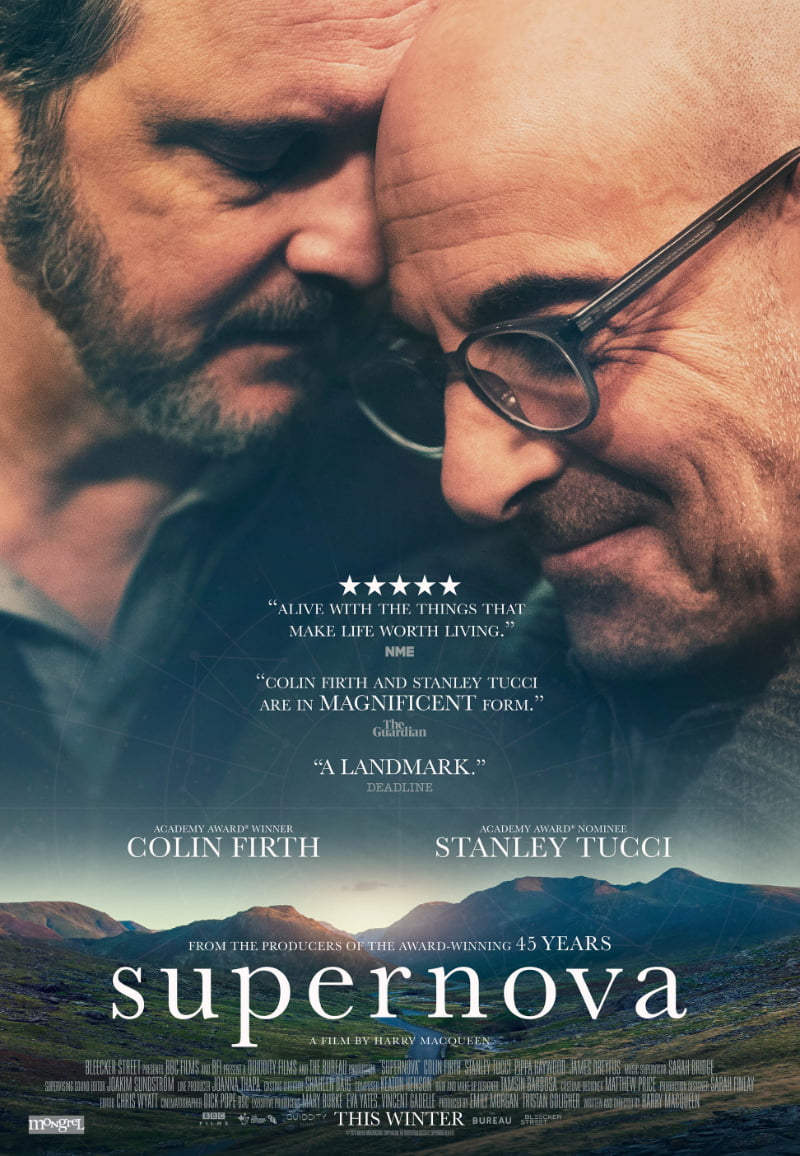