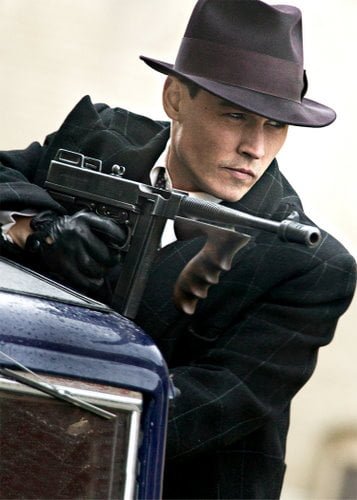 Out this week in theatres, following its Canada Day debut, Michael Mann‘s Public Enemies looks back at the infamous criminal John Dillinger and his run from the FBI. Plus, we take a look at the third Ice Age film, Dawn of the Dinosaurs, and the brainy sci-fi drama, Moon.

Public Enemies
During the Great Depression, in 1933 to be exact, there was hardly anyone more admired and reviled than bank robber and known killer John Dillinger. While the United States suffered in the turmoil of a huge economic downturn, Dillinger was robbing banks, escaping from police, and being idolized as an anti-hero.

He went on to write, “John Dillinger has been portrayed on film in a starring role at least five times and virtually all of them, as is the case with Public Enemies, focus on the eight furious weeks of crime and punishment that followed Dillingers release from a nine year prison term. Public Enemies, in my opinion, ties for the best of the the bunch with the 1973 John Milius written and directed film called Dillinger.”

Ice Age: Dawn of the Dinosaurs
In the second Ice Age sequel from 20th Century Fox, we catch up once again with Manny, Sid, Diego, and Ellie – the quartet of prehistoric critters voiced by Ray Romano, John Leguizamo, Denis Leary, and Queen Latifah. This time out the friends are all having, or at least thinking about having, little ones, with Manny and Ellie expecting their first baby.

Meanwhile, when Sid the Sloth gets into big trouble, it’s up to the whole group to find a way to save him. This will of course, once again, lead them on a big adventure as Scrat the squirrel competes with a lady squirrel for one of his beloved acorns.

Looking to the critics, Ice Age: Dawn of the Dinosaurs does not seem to be impressing many of the writers. As Betsy Sharkey of the Los Angeles Times writes, “Why does the third installment of this animated tale often feel so glacial it’s a wonder Ray Romano’s Manny the mammoth doesn’t freeze in his tracks?”

There are also piles of other negative reviews from the likes of the Associated Press and the Washington Post.

While I think I’d have to side with the idea that the sequels are not nearly as good as the original film, there is one thing to remember: these are family movies, and frankly, if all you want to do is amuse the kids, you can’t go wrong with another Ice Age film.

Moon
Opening in select theatres, Moon stars Sam Rockwell, appropriately enough, as Sam, an astronaut working on a solo mining operation on the moon. Stuck in the sterile environment, where he can only communicate with his family through taped messages, Sam is near the end of his trip when he starts to experience terrible headaches and hallucinations. After an accident, and strange experiences, Sam meets what he believes to be a younger version of himself, who says he has just arrived for the same three-year mission Sam is about to complete.

Trying to deal with the turn of events, Sam’s only companion is the computer known as Gerty (voiced by Kevin Spacey) as he tries to discover what is really going on.

With so few smart, intelligent sci-fi films out there, Moon seems like a breath of fresh air, especially for someone like me. The only problem is that it’s hard not to think of films like Solaris, or even Sunshine, which are honestly quite hard acts to follow.

Writer Christine Estima has some good news though. On her blog she wrote, “Moon is a very quiet and insular film that plays tricks with your head. Sam Rockwell essentially carries this entire film, with Kevin Spacey voicing the benevolent but cryptic computer who takes care of him on the surface of the moon for years at a time.”