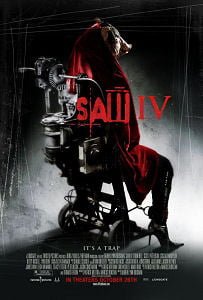 The latest Saw movie arrives just in time for Halloween, Steve Carell and Simon Pegg both have new comedies out this week, the remake of the thriller Sleuth brings Michael Caine back to the big screen again, plus there’s a drama starring Kevin Bacon, and a bio pic retelling the life of Joy Division lead singer Ian Curtis.

Saw IV
Okay, I’ll admit it. Saw is huge. The film series may not be well respected, but it’s still a big deal and the latest film is sure to draw audiences this week. In the series unsuspecting people are captured and forced to work their way through horrific puzzles created by the Jigsaw Killer. At the end of the last film though, Jigsaw and his accomplice are dead, but somehow his plans continue in this new film that explores how the killer got started and what he had planned next.

It’s safe to say that if you didn’t enjoy the other films you won’t enjoy this one, but there’s no doubt that Saw IV will be good for two creepy hours of horror and blood.

Dan in Real Life
Steve Carell is a hilarious actor, although he doesn’t always star in the best films. In his new film, Carell plays an advice columnist who is also a single father trying to take care of his two daughters. He runs into new problems though when he falls for a woman, played by Juliette Binoche, who is dating his brother, played by Dane Cook. Dan in Real Life looks like a smart, dramatic comedy and it will likely benefit from first time director Peter Hedges, best known for his work as a screenwriter for the films Pieces of April, About a Boy, and What’s Eating Gilbert Grape.

Run, Fat Boy, Run
This may not be Shaun of the Dead, but actor Simon Pegg invests a lot into this amusing comedy that co-stars Thandie Newton, and Hank Azaria and was directed by Friends star David Schwimmer. Pegg plays Dennis, a loser who runs out on his pregnant fiancÃ©e on their wedding day, and goes downhill from there. Five years later he’s slightly chubby, living in a basement apartment, and still dreams of making things right with Libby and their son. He also wants to win her back, but Whit, her new boyfriend, is standing in the way. Dennis figures the only way he can prove he’s not a loser any more is to run in the same 26-mile marathon that Whit has entered.

The film is genuinely funny, but also just a bit cheesy. Pegg is such a charismatic, enjoyable actor though that his presence alone helps the film out a lot, as do co-starring roles by Nick Frost and Dylan Moran, who you also might recall Shaun of the Dead.

Also opening in a number of theatres this week is a remake of Sleuth starring Michael Caine and Jude Law as two men trying to scheme each other from the woman they both love and Caine’s wealth. The film hasn’t been very well received, but it was directed by Kenneth Branagh.

There is also Control, a biopic that tells the harrowing story of Ian Curtis, the once great musician who led Joy Division in the 70s, but was consumed by depression.

And Rails And Ties, starring Kevin Bacon as a railway conductor confronted by tragedy when the train he is driving kills a suicidal mother and Bacon’s character must face the dead woman’s child while struggling with his own troubled marriage.