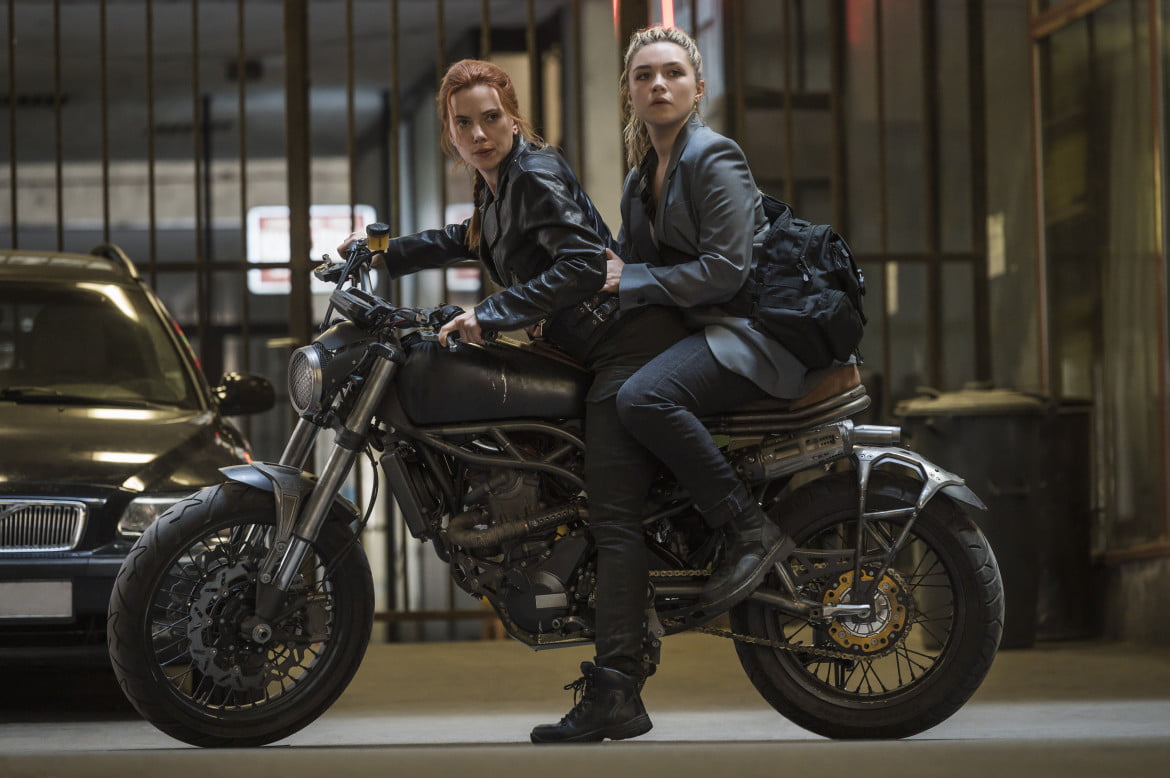 Scarlett Johansson is a sight for sore eyes. Marvel’s Black Widow is out in Canada on Disney+ Premier Access now, and the film finally brings Natasha Romanoff back to us for some big screen revenge, and it’s a helluva ride.

Directed by Cate Shortland with a screenplay by Eric Pearson, the film finally delivers on what fans will be hoping for from the iconic spy superhero. Natasha kicks ass, she goes full-on Black Widow on Russian villains, and there’s a nod to the character’s legacy to help close the chapter.

Black Widow is set during the Civil War phase of the MCU, after a lot of the heroes had to go on the run. This is before the events of Avengers: Endgame, which is of course why we even get to see her again. Natasha is running from S.H.I.E.L.D., but it’s not long before she gets caught up in a bigger story to find and destroy the elusive Red Room, where Russian agents like her are created, after their lives have effectively been destroyed.

If you wanted the short version of my review, that’s really the heart of it. If you want to skip any spoilers, maybe stop here? I am going to talk about a few light spoilers from the film, so feel free to stop reading now. I promise though, these are only light spoilers.

Okay, so are you ready?

The film opens in 1980s America with your typical family. Mostly. There’s a blue-haired kid, played by Ever Anderson, a little sister named Yelena, and then Rachel Weisz is their strange mother, with the one and only David Harbour as their father.

They’re not really a happy, American family though. They’re Russian agents, and minutes into the film the family ends up on the run when their cover is blown, and they have to flee.

The whole sequence is only a few minutes long, but it’s kind of heart-rending on a few levels. S.H.I.E.L.D. gives chase to the family. Alexei, their father, helps save the day, and then we come to realize that the blue-haired kid is a Young Natasha.

Although Anderson is only in the film for a few minutes as Young Natasha, I have to say that she was astonishing. If this role is any indication of what she can do, she’s going to be a huge star.

Jump ahead, and after the escape there’s a creepy-cool cover of Nirvana’s “Smells Like Teen Spirit” (by Think Up Anger featuring Malia J), with some big A Clockwork Orange energy going on. It’s a bit heavy-handed, but it’s a good intro into what Natasha went through as a kid to become Black Widow.

Skipping ahead a bit more, Natasha is drawn into the fight to free the girls of the Red Room with the help of her sister, and that’s where we meet Florence Pugh playing the grown up Yelena. We know they’re aren’t close, and haven’t seen each other much over the years, but Yelena still knows Natasha well, and she’s been following the news of her big sister’s life.

Together, they head off to take on the mind control and chemical subjugation that turns young women into practically thoughtless killers, and it’s a weirdly charming story with an excellent cast.

The story isn’t perfect, but it’s a ride that carries you away quickly to the next chase, battle, and big event.

For the cast, Harbour is fantastic as Alexei, AKA the Red Guardian. He’s larger than life, and there’s a fantastic Russian Mr. Incredible vibe that he gives off throughout most of the movie.

Hunting down their “mother”, Melina Vostokoff, played by Weisz, some of my favourite scenes were with all four actors. Their chemistry, the dialogue, and the whole Russian agents concept drew me in more than I expected.

Pugh as Yelena is a huge breath of fresh air, too. The character is one of the brightest lights, constantly poking fun at Natasha, and it’s easy to see her as the future of Black Widow. Who knows what’s next, but I expect to see her again some time soon.

My biggest complaint with Black Widow is just that the timing makes no sense within the MCU. Black Widow should have been made and released after Captain America: Civil War. Scarlett Johansson deserved that moment, and the fans deserved to see the character in her own story before she was killed.

So far Marvel has dragged their feet in giving the women of the MCU their screntime and starring roles, and while there is a shift coming in the next stage of the franchise, it feels incredibly lazy dropping Black Widow more than two years after the character died on screen.

As far as the script goes, it’s better than at least half of what we’ve seen from the MCU before. It could have had a bit more depth, but the cast, stunts, action, and effects are excellent.

Shortland’s direction is very slick, and she captures the best we’ve ever seen of Black Widow. Some of my favourite scenes with Natasha are probably from Captain America: The Winter Soldier, but it’s a close one for me now, as she has a lot to work with in Black Widow.

Natasha has to face her sins, and yet she gets to bond with her sister, and the only family she’s ever known. That’s something, if you’ve been a fan of the character.

In terms of the film, I’m also happy to see that Black Widow is also one of the most standalone MCU films in years. That’s refreshing and surprising after all the Marvel films we’ve seen leading up to Endgame, and it’s better than a lot of other films in the MCU.

While the stakes are strange, since we know Natasha survives whatever happens in the film, it’s going to be a crowd pleaser. There’s something very compelling about a revenge story like this, especially considering the dark undertones we get about control, and overthrowing the roles that “powerful” men play in the lives of women.

And, yes, stay until after the credits. Unless you’ve been reading spoilers, you may not expect who shows up.

“Sorry, I’m allergic to the midwest.”