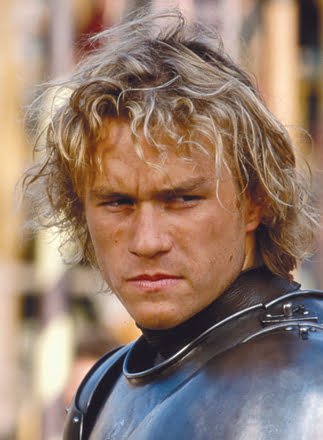 Heath Ledger in A Knight's Tale

New releases seem to have dried up today, so this week I take a look at 13 of my favorite summer movies and DVDs, including action movies, teen comedies, love stories, and of course, a few recent notable animated classics.

A Knight’s Tale
While most people will remember Heath Ledger for his final performance, personally, I will always think of this film as one of my favorites. Complete with a classic rock soundtrack, A Knight’s Tale was one of Ledger’s first big hits where he played a down-and-out peasant who finds fame and glory pretending to be a knight. The film also features great performances by Paul Bettany, Rufus Sewell, and Shannyn Sossamon.

Shaun of the Dead
What does this movie have to do with summer? Not much, aside from the fact that it seems to be set during a summer in England, but it’s still an all-time favorite, and a perfect pick for a weekend at the cottage. The hilarious Simon Pegg stars as Shaun, a do-nothing bloke who just lost his girlfriend when a zombie outbreak has his group of friends trying to survive the wrath of the living dead. Nick Frost co-stars as his best bud in a film that I consider an all-time great, whether you want a horror film, or a comedy.

Dukes of Hazzard
Call it a comedy, or call it an action film, whatever you say the Dukes of Hazzard adaptation was fun on wheels. Starring Johnny Knoxville, Seann William Scott, and of course Jessica Simpson, the movie has everything to keep you amused, especially if you’re a fan of the original 1970s series. The DVD has a meagre number of features, but the bloopers are totally worth a look.

Ghostbusters (DVD & Blu-ray)
Do I even need to explain this one? Now out on Blu-ray, in addition to numerous editions on DVD, this 1980s classic still looks fantastic and stars Bill Murray, Dan Aykroyd, Harold Ramis, and Ernie Hudson as a team of paranormal exterminators wreaking havoc in New York City.

Eight Legged Freaks
You may have missed this campy cult-hit, but I’m highly recommending it for anyone who enjoys tongue-in-cheek laughs mixed with retro-grade horror. David Arquette, Kari Wührer, and Scarlett Johansson star in this B-movie tale of giant mutant spiders on a rampage that could leave every person dead in the failing town of Prosperity, Arizona.

Empire Records
Featuring one of the best soundtracks of the 90s, this comic-drama looks behind the doors of the ailing Empire Records store after one employee makes a huge misstep that could cost them all their jobs. The film stars Liv Tyler, Anthony LaPaglia, Renée Zellweger, and Robin Tunney in a story that is both a lot of fun, and sweet as candy.

American Pie
On the more adult side of teen comedies, American Pie is the now-infamous 1999 comedy about a group of high school buddies who just want a little experience before they head off to university. Jason Biggs stars as the head loser in this sugary, but often heartfelt comedy that still makes me laugh, especially thanks to Eugene Levy and Alyson Hannigan.

CARTOONS FOR KIDS AND ADULTS

Toy Story & The Incredibles
While these two films are anything but similar, they both come from the great Pixar studios, and represent some of the best children’s films made over the last two decades. You could actually go out and pick up just about any Pixar movie, including Wall-E or Nemo, but I’m recommending these two specifically because they’re so much fun and embody the whole feel-good summer attitude.

Shrek & Shrek II
Under the non-Disney/Pixar category, the Shrek films (especially the first and second ones) are simply fantastic adventure stories with wit and heart aplenty. Mike Myers, Eddie Murphy, and Cameron Diaz make their characters leap off the screen, in stories that are simple and entertaining. Adults get the added bonus of some of the best pop-culture references in recent years, in a film that’s actually quite funny.

Shakespeare In Love
This Academy Award-winning drama stars Gwyneth Paltrow and Joseph Fiennes in a love story loosely based on the life and works of William Shakespeare. Fiennes plays the young Will, who falls in love with Viola, played by Paltrow. The problem is that she is already promised to another man, but their love affair continues even as she takes the stage, disguised as a man, playing the part of a woman. Partly a romantic comedy, but mostly a drama, this stellar film also features Judi Dench in the short, but amazing role of Queen Elizabeth I.

Pleasantville
Writer, director and producer Gary Ross works utter magic with this sweet and iconic drama about two teenagers, played by Tobey Maguire and Reese Witherspoon, who are drawn into the make believe world of the fictional 1950s-era TV series known as Pleasantville. Initially stuck in the lives of the characters they have replaced, the world begins to change quite quickly as the duo bring colour to the black and white lives of the people there.

Under The Tuscan Sun
Lastly, there is the very girlie Under The Tuscan Sun, a film that I probably shouldn’t admit is one of my favorite Diane Lane films of all time. Lane stars as Frances, a recently divorced writer forced by her friends into taking a tour of Tuscany where she suddenly decides to buy a home, which proves to be a long work in progress. The new adventure leads, however, to a chance to rediscover herself, and make some new friends along the way.