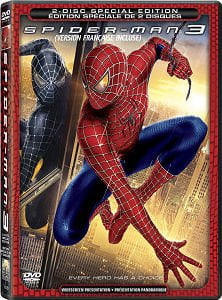 This week in stores, Tobey Maguire swings through New York fighting villains, Mandy Moore aims to earn her wedding license, one of TV’s best teen dramas arrives, and O.C. star Adam Brody is In the Land of Women.

Spider-Man 3
Director Sam Raimi has had quite a run with his big-screen adaptations of Spider-Man, and it never hurt that star Tobey Maguire is both a fantastic Peter Parker and super-powered web-slinger. In the latest installment of the franchise however Raimi and crew have run into a common problem: too many villains.

First there’s Harry, played by James Franco, who wants to get even with Peter for killing his father. Then there’s this dark, new Spidey suite that seems to be twisting Peter around. And on top of that, a new villain has strolled into town and his name is the Sandman.

Starring Thomas Hayden Church, as the Sandman, plus Kirsten Dunst as Mary Jane, and Topher Grace as Eddie Brock, the film has some serious star-power, but Church easily steals the film. Spidey fans will still get a kick out of the story, the effects, and if nothing else the appearance of Venom, but expect a muddled storyline.

License to Wed
License to Wed could have been great – too bad it only has an amusing concept going for it. In the film Mandy Moore and John Krasinski play a new couple who decide they’re ready to get married. The problem is that their reverend, played by Robin Williams, tells them that they have to pass a series of tests and counseling before they can tie the knot. Williams coasts his way through yet another comic role, and there’s no missing the fact that Moore has rarely proven herself as a comic actress. Kevin Crust of the Los Angeles Times sums the film up by calling it a “pastiche of tortured slapstick, groan-inducing dialogue and a lethal dose of treacle.”

My So-Called Life: The Complete Series
My So-Called Life only lasted 19 episodes, but it was one of the more critically acclaimed teen dramas from the 90s. Claire Danes stars as Angela Chase, an average girl trying to deal with real-life issues, like school violence, drug use, and sexuality. What stands out about the show, especially compared to most American-produced shows, is that it’s so honest. In a way it resembles one of Canada’s best teen dramas, Degrassi, except that My So-Called Life is just a bit more polished. Danes is also a fantastic star for the show, and the supporting actors are perfect. The DVD extras are well worth checking out, especially the interview with Danes, and the featurette on the impact of the show.

In the Land of Women
Adam Brody is Carter a young screenwriter trying to find his way in the world. With equal parts comedy and drama, the film follows Carter after he is dumped by his beautiful girlfriend and moves to a Detroit suburb where he befriends Lucy, played by Kristen Stewart, and her mother, a breezy Meg Ryan. While working on his new screenplay he finds himself befriending both women. Brody and the cast were praised for their roles, however a lot of critics claimed the film didn’t have a unique story. Carrie Rickey of the Philadelphia Inquirer said in her review, “The film belongs to Brody, irritating and endearing and relatable in ways that actors rarely are.”

Also out this week, check out Talk to Me starring Don Cheadle as a socially progressive radio DJ in the 60s, the Russian vampire cult action films Day Watch and Night Watch, and the off-beat Indie horror film Dark Rising. Plus, season six of Scrubs arrives this week, as well as Twin Peaks – The Definitive Gold Box Edition.