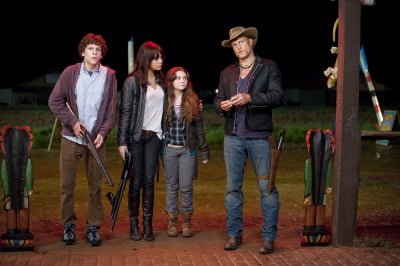 Bring on the gore, bring on the laughs; on Friday, October 2 Columbia Pictures debuts their new movie, Zombieland, and if you’re a fan of horror and comedy, you’re going to want to check this one out.

Synopsis: Columbus (Jesse Eisenberg) has made a habit of running from what scares him. Tallahassee (Woody Harrelson) doesn’t have fears. If he did, he’d kick their ever-living ass. In a world overrun by zombies, these two are perfectly evolved survivors. But now, they’re about to stare down the most terrifying prospect of all: each other.

More video, red carpet coverage, and a review of the film coming Friday.

Watch the trailer below.