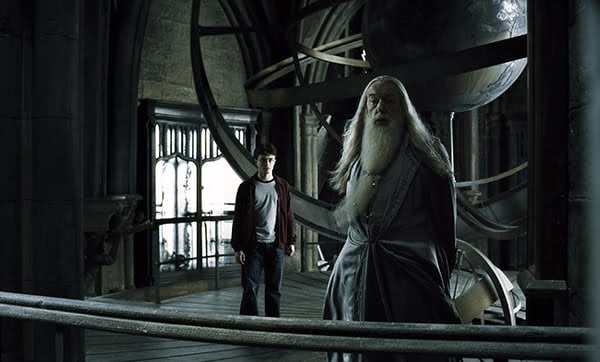 Harry Potter and the Half-Blood Prince
Over the last twelve years the world has been following the adventures of a young boy as he battled against the dark power of one evil wizard and his minions. With each passing year, and each new book, the franchise grew and grew, turning it’s creator into a revered figure among her many, many fans.

Leaping onto the big screen nearly eight years ago, Harry Potter and the Philosopher’s Stone introduced us to a young cast that has literally grown up before our eyes. J.K. Rowling’s books have turned into a massive franchise today, and one that is almost hard to pin down, considering the numerous talents who have been involved in bringing it to life.

This is the backdrop for what must be one of the biggest films of the summer, if not the entire year.

With the opening scene positively giving me chills, which were carried through the film, even as I laughed at many of the film’s more jovial scenes, I can’t help but praise Harry Potter and the Half-Blood Prince as the best film in the franchise to date. That comes with some serious qualifiers, but I think it’s still an unequivocal fact.

On the bright side of things, I cannot praise the film’s casting and all of their performances enough. The entire cast does deserve high praise, as Radcliffe, Grint, Watson, Gambon, and all of the supporting cast worked their usual magic once again.

But, there are three particular performances that stand out. Jim Broadbent is simply wonderful, and entertaining as Slughorn, but I also can’t say enough about Alan Rickman as Severus Snape, and Tom Felton as Harry’s nemesis, Draco Malfoy. This trio of actors deserve the highest praise for their work because they simply found wonderful layers within their characters, which brings a lot of feeling into each of their scenes.

The key to this new film though seems to be the sheer realism of the emotions, which makes you feel like you have walked in on a few months of these character’s lives. That is a tough thing to accomplish in this world of magic, especially after most of the other films were almost farcical, but Yates has found a way to push magic practically to the side of the more important story, which is really about the characters, their choices, and their troubles.

The Hurt Locker
Good films are not hard to come by. In fact, they’re more common than I think most people realize. Certainly more common than most critics seem to let on. On the other hand, great movies are a very rare creature indeed. In any given year it is something of a battle to find more than ten mind blowing cinematic experiences, but by all accounts, The Hurt Locker is easily going to make it onto this year’s list.

In this dramatic thriller from director Kathryn Bigelow, the story goes behind the scenes on the streets of Baghdad where a team of three technicians works day by day at disarming bombs and explosives. Known as the Explosive Ordnance Disposal squad, the team is both surprised and nervous when the unflinching, but seemingly reckless Staff Sergeant William James, played by Jeremy Renner, takes over for their recently deceased leader.

The job calls for strict protocol, and even stricter safety measures, but their new leader seems to have a style all his own and despite his miraculous record, they’re all afraid that it’s going to get them killed before their tour of duty ends in a mere 38 days.

It also seems a disservice not to mention cinematographer Barry Ackroyd, who previously worked his magic in The Wind That Shakes The Barley, not to mention film editors Chris Innis and Bob Murawski. With director Bigelow and the rest of the amazing cast and crew, this team has created one of the most critically acclaimed and visceral films of the summer, which promises to be one of the best dramas of the year.

Praise has been heaped on the film following its debut at multiple film festivals, and although there were numerous reviews to quote I think Joe Morgenstern of the Wall Street Journal said it best: “A first-rate action thriller, a vivid evocation of urban warfare in Iraq, a penetrating study of heroism and a showcase for austere technique, terse writing and a trio of brilliant performances.”