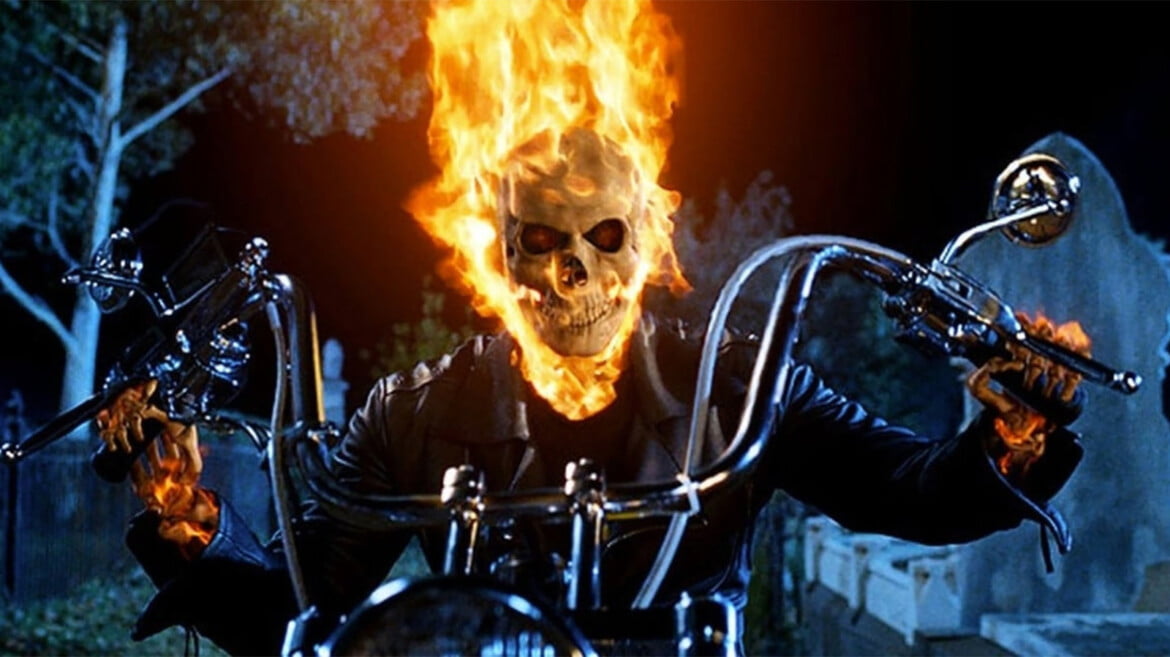 Ever since I was a teenager Ghost Rider has been one of my favorite comic book heroes. He has everything it takes to be a great tragic/violent icon–from the flaming skull and the painful past to the fact that he fights against the perfect nemesis, the Devil.

The only problem is, he might be what you call a true comic book hero. On paper he’s an intense character who survived on style and darkness, but somehow after the transformation to the screen, you feel like something might be missing something.

Starring Nicolas Cage as Johnny Blaze, Ghost Rider tells the short but troubled tale of a motorcycle stunt rider who makes a pact with the devil to cure his father of cancer. Unfortunately for Blaze, the devil isn’t exactly a nice guy and pulls a dirty trick on him. We then catch up with Blaze again a number of years later when Mephistopheles calls in his favour, forcing Blaze to deliver vengeance as a flaming, skeletal bad boy with a penchant for leather and chains. The vengeance in this case is being served to Mephistopheles’ own son, Blackheart, who wants to bring about the end of days and only Ghost Rider can stop him.

To the credit of director Mark Steven Johnson, Ghost Rider is a suitably dark and violent little movie with a certain style, but it can’t overcome the minutes upon minutes of cheesy dialogue, not to mention the inane plot. Questions loom up at every turn–like, why the devil even needs a bounty hunter, and most importantly, how Blackheart can bring about the end of days with his three wimpy friends.

Through some wickedly cool casting, decent special effects, and a relatively dark, but campy mood, Ghost Rider does rise above these crippling problems at times though. Without Nick Cage the whole thing would have likely fallen apart, but he does his best gritty, likeable, man-child impersonation, while channeling a little of the old Elvis again, and somehow makes you believe he’s one of the most beloved, and troubled, stunt riders in America. All the while Peter Fonda lightly nibbles on the scenery as the wonderfully wicked Mephistopheles, Wes Bentley does his best as the slickly evil Blackheart, and Eva Mendes plays the sweet and stunning Roxanne Simpson with as much cleavage as the costume department could manage.

As an original fan though I couldn’t help but think about the movie that could have been. Much like Punisher, Ghost Rider might have been a better film if it had been allowed to be even darker. This isn’t some guy in spandex fighting crime, he’s a demon from hell who gets summoned to earth and takes over the body of a human who can’t control what’s happening. Every night Ghost Rider emerges by burning the flesh off of Johnny Blaze, and then he makes the evil people of the world live out the pain of what they’ve done to innocent people.

That’s not exactly what you’d call light fair – the writers obviously had a lot to work with and they either weren’t capable, or the studio cheesed it down to the lowest possible level.

At the very least the concept is still intensely cool, and that concept survives very well on the big screen, but the usual movie adaptation cheese-factor is kind of through the roof. We’re not talking Catwoman cheese levels here, mainly because of the cast and the occasional comic moment, but if Ghost Rider is going to be a franchise like Sony obviously hopes it will become, the script actually needs more than a few minutes of thought. Kick up the action, make it even darker and maybe even more violent, and then let Ghost Rider loose on the streets again.

As a long-time fan I could go on, and on about this movie and why it could have made a better leap onto the big screen. I could talk about how Ghost Rider has been ripped off (I’m looking at you Spawn), and I could even get into the whole appearance of the original horse-riding Ghost Rider, but I won’t. All I’ll say for now is that the future of this franchise hinges on a decent opening weekend – based on this film though, they’d better hope that audiences are content to bask in the fiery glow of our heroes flaming skull since the story does’t have much heat.