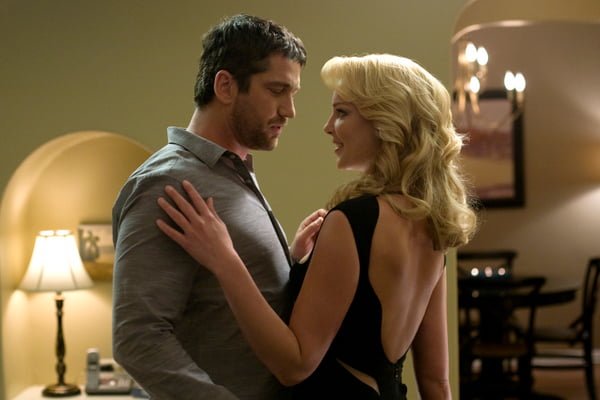 Gerard Butler and Katherine Heigl in The Ugly Truth

Dating gets more difficult this week, as Katherine Heigl and Gerard Butler star in the wannabe romantic comedy, The Ugly Truth. Also opening in theatres, a group of guineau pigs goes top secret in G-Force, an adoption turns horrific in Orphan, and in select theatres look for the comedy, (500) Days of Summer.

The Ugly Truth
Date movies can be wonderful things… when they’re done right. The problem is that so few directors, or writers, seem to really know what to do with them. In the case of The Ugly Truth, a film that desperately wants to be a little different, the whole movie comes across as a wolf in sheep’s clothing, or even a failed crass crossover between Superbad and Serendipity, rather than a real romantic comedy.

Katherine Heigl stars as lovelorn morning show producer Abby Richter, the kind of woman who has to point out every flaw, never knowing that she’s actually turning off every potential date. With her show tanking in the ratings, life gets a bit worse as her boss forces her to work with the crass, but insightful, Mike Chadway, played by Gerard Butler. Mike is the kind of guy who somehow seems to know all the ins and outs of relationships, without really believing in the idea himself.

They form an uneasy alliance, bringing Mike’s late-night cable show, The Ugly Truth, to the morning show crowd. It’s only when Mike is able to help Abby win over the cute guy next door that she realizes Mike may not be such a bad guy after all.

While the premise is clever enough, and some of the jokes are pretty funny, The Ugly Truth is a contrived, obvious story that leaves you rolling your eyes, especially in the climactic scenes near the end. For anyone who has ever seen any romantic comedies before, the story also hits all the major points you would expect on the path of Mike realizing he actually loves Abby.

Where many date movies find a way of saving themselves, despite the script, mainly with the help of the cast, I found it hard to accept that the film did anything right. It’s far more crass than most romantic comedies, something that could have worked for it, but it’s a tactic that comes off feeling wrong in the end.

Most importantly though, Heigl never inhabits her character, acting like someone who was forced to do the film, while Butler delivers a few great scenes, but never really does more than the “average misogynistic guy” routine.

In all fairness, both actors have some great scenes, but the majority of the film feels like director Robert Luketic just didn’t know how to inspire his actors. Heigl goofs her way through the film’s silliest scenes, but it is always very clearly acting work for her.

Some day, I’ll probably rewatch The Ugly Truth at home on a rainy Sunday afternoon when nothing else is on cable, but it is simply not a big screen film, or worth the price of admission.

G-Force
Producer Jerry Bruckheimer, the master of explosions and action movies, switches gears this weekend, debuting his first animated film about a group of guinea pigs trained in the fine art of espionage.

With the voices of Sam Rockwell, Penélope Cruz, Tracy Morgan, Nicolas Cage, Jon Favreau, and Steve Buscemi, the film has an excellent cast. It is, however, hard to judge just how good the film will be.

Since the film was produced by Walt Disney Pictures, it will likely be passably entertaining for families and kids alike, but there are no guarantees.

Orphan
From director Jaume Collet-Serra comes the controversial horror film about a family who loses their unborn child. Opting to go a different route, the couple decide to adopt a child from an orphanage, but when things start going really wrong at home, they realize they may have made a mistake in adopting the young, potentially evil, Esther.

With many adoption agencies decrying the film for painting adoption in a negative light, the film is still bound to draw in horror fans looking for a creepy tale. It does not, however, look like much more than a common gimmicky, horror cliché.

(500) Days of Summer
Opening in select theatres, and already out in a few markets, comes the off-beat, but highly praised comedy about a couple rushing through a year-and-a-half love affair. On the one hand, there’s the dreamy Tom, played by Joseph Gordon-Levitt, who hopes for a romance to end all romances. On the other hand there’s Summer, played by Zooey Deschanel, the object of his affections who just doesn’t see love the same way.

The word off-beat gets used a lot, but in this case it points to a film that is being called refreshing, and wonderfully honest, and getting solidly fantastic reviews.