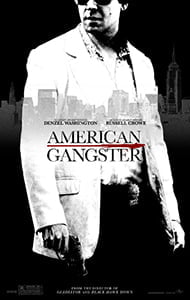 Ridley Scott brings his latest box-office smash to a theatre near you, Jerry Seinfeld returns to the limelight for an animated film about a bee, John Cusack plays a writer who adopts a alien child, and get lost in Tracey’s fragmented world.

American Gangster
American Gangster is a powerhouse of a fall movie that combines producer Brian Grazer and director Ridley Scott with film icons Denzel Washington and Russell Crowe. In the story that’s apparently based on a true story, Washington is Frank Lucas, a smart guy who finds a way to make himself the kingpin of an inner-city empire that overshadows every other kingpin in town. Crowe, playing the role of outcast cop Richie Roberts, follows Frank’s rise and rallies to take the drug lord down. With this cast, and Scott as the director, this is a sure-fire hit for anyone who enjoys a good crime drama, and there is already speculation among critics that the film stands a great chance at winning some major awards.

Bee Movie
Comedian Jerry Seinfeld has been missing in action for the past few years, but he takes a gamble in this new animated movie where he plays Barry B. Benson, a bee that can’t stand the idea of being stuck in one career in the hive. When he meets Vanessa, played by RenÃ©e Zellweger, he breaks one of the bee world’s big rules and talks with her – ultimately becoming her friend. Through her he also discovers that humans are stealing the bee’s honey, and resolves to do something about it. While the trailers look really good, and the film does look like it’s bound to bee funny (sorry, it had to be said) there’s no question that if this movie flops it will be bad news for Seinfeld.

The Martian Child
The word I think I’m looking for is schmaltzy, but it’s hard not to love John Cusack when he’s in his element. That element is of course the world of the romantic comedy, and in his latest film Cusak plays a sci-fi writer who adopts a strange boy who claims to a Martian. Is he really an alien child? Will Cusack’s character help him adjust to life as a normal kid? And what will happen with co-star Amanda Peet, who seems to be the love interest of the film? A number of online critics have praised the film for being smart and emotional, and with director Menno Meyjes behind the wheel (who wrote and directed the fantastic Cusack film Max), I definitely expect this to be a film to remember.

The Tracey Fragments
Opening in select theatres this week is also Bruce McDonald‘s intense and artistically driven film that stars Ellen Page as Tracey Berkowitz. While the film is a little hard to explain, it delves into Tracey’s life and troubles when her brother Sonny goes missing. Throughout the film we see Tracey’s life open up like a fractured story – getting small pieces as we go along, and only finding the truth as the film ends. Page is a fantastic actor, and makes this intense and oddball film work, but it’s also McDonald’s skills as a director that this story doesn’t fall apart. The editing is a bit wild, dark and oblique however, but well worth the ride.

Also opening in select theatres this week is Darfur Now, a documentary about the troubled region of Darfur, Sudan. And Surviving My Mother, a dramatic comedy set in Montreal that looks at a mother who gets involved in her 21-year-old daughter’s life.