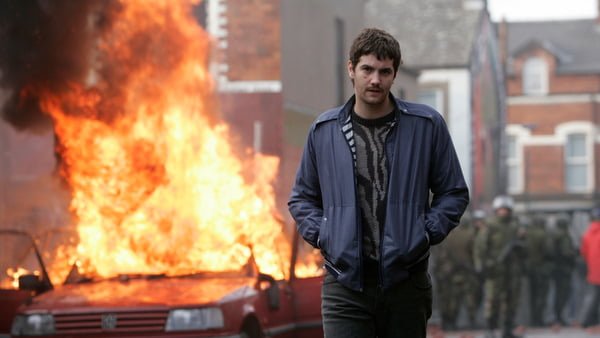 Opening this weekend, Jim Sturgess stars in the thriller Fifty Dead Men Walking, about an young Irish man working for both the IRA and the British police in the early 80s. Also debuting in theatres, Adam Sandler and Seth Rogen star in Funny People, plus a quick look at the family comedy, Aliens in the Attic.

That problem isn’t a result of forgetfulness, the real problem is that I’ve had a lot of time to rethink how the film makes me feel, and I realize now that I’m still somewhat torn.

In this story, based on the life of an IRA volunteer, Jim Sturgess stars as Martin McGartland, a 22-year-old living in Northern Ireland in the early 1980s. Hustling merchandise to make a living, Marty gets entangled in a frightening political battle when he is approached by the Irish Republican Army to become a recruit. At the same time the British police want Marty to work for them, tipping them off whenever he has information that could save lives or bring down key members of the IRA.

Grudgingly accepting the roles he’s offered, Marty starts to lead a double life, with secrets that he can’t even share with his family, for fear of what might happen. The only person who really knows what he’s up to is Fergus, played by Sir Ben Kingsley, a Special Branch officer who becomes a sort of father figure to Marty.

Marty walks that fine line between these two lives he leads, but eventually there is only so far he can go before his secret could cost him his life, and the lives of his family. His secret may also face its hardest scrutiny from his best friend, Sean, played by Canadian actor Kevin Zegers.

Played as a dramatic thriller, the film has more than enough grit and mood to keep the story intense, and real. Sturgess plays Marty effectively, with loads of charm and bravado, but his performance doesn’t stray too far from what we would expect of him.

Sir Kingsley is otherwise almost invisible in this role, for both the good and the bad. He is far more restrained here than usual, which suites the role well, but it feels like he deserved more to work with.

Shot on location in Ireland, Fifty Dead Men Walking hits all the right notes, and builds itself to a pitched finale that brings everything together. It feels right, and yet, I couldn’t help but feel like the film was predictable and the script overly thin.

From the start, you know how the story will play out, and that’s fairly intentional, but it feels like Skogland didn’t take big enough risks, and neither did the screenwriter.

Skogland wrings wonderful drama from that script, pacing the film well, and finding a clever middle-ground to this story about the war between the IRA and the British police. And I am happily recommending the film, based on all the things that it gets right, including the great cast, which also includes Rose McGowan as a fiery IRA big shot. The fault I have a hard time with though is simply that the film feels far too careful about walking the line between these two sides, which ultimately lessens some of the impact of this remarkable story.

Funny People
Funnyman writer and director Judd Apatow is back with another comedy, but this time it’s apparently a lot more about the drama. Starring Adam Sandler as a famed comedian, who is diagnosed with a serious blood disorder, the story is as much about friendships and life, as it is about realizing ones own mortality, and what’s important in life.

Co-starring Seth Rogen, Leslie Mann, Jonah Hill, Eric Bana, Jason Schwartzman, and rapper RZA, the story revolves on Sandler, as George, and Rogen, as Ira, who come together as friends in the midst of George’s personal revelations.

Critics have been mostly positive about the film, with Ann Hornaday of the Washington Post calling it a “rare mainstream Hollywood movie that feels genuinely spontaneous, unafraid to keep the audience just a little bit confounded and off-balance.”

On the negative side of the reviews David Edelstein of New York Magazine called Funny People “insular, as if Apatow’s whole world consists of nerdy jokesters who were angry, lonely kids who got rich beyond their dreams… but are deep down still angry.”

Aliens in the Attic
Lastly, in this family movie a group of kids have to defend themselves from troublesome alien invaders who want to destroy the planet. While the parents remain oblivious, the kids will have to save the day while they’re supposed to be on vacation.

The film was not screened for the media, so it’s hard to say much more about it, except that it looks sadly shallow.