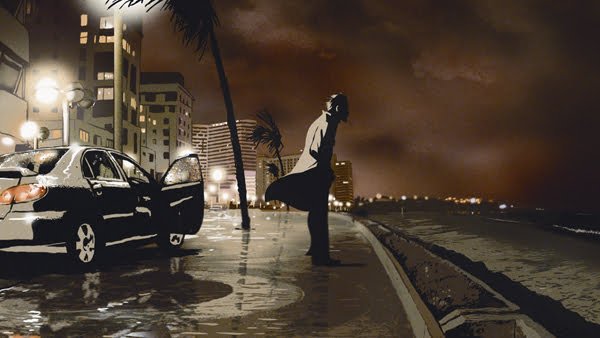 Coming out this week in stores, director Ari Folman looks back on his youth during the Lebanon War in Waltz With Bashir; Paul Rudd and Jason Segel star in the comedy I Love You, Man; and Sony Pictures debuts Starman and St. Elmo’s Fire on Blu-ray.

Waltz With Bashir
The mind reels with the sheer enormity of Ari Folman’s Waltz With Bashir, a beautiful but disturbing animated documentary that looks for answers in the hazy memory of a terrible war.

Written, directed and produced by Folman, this Academy Award-nominated film recounts the 1982 Lebanon War through the director’s eyes as he tries to reconstruct elusive memories that his mind has made him forget.

Opening with a visceral example of the film’s unique style and vision, we watch a pack of feral dogs race across a city looking for their target. That scene sets the tone of the film, which is no less beautiful, even as it shows us the brutal truth of this horrible time in Lebanon.

Following the director’s path of consciousness, we meet the people he knew from the war, who he hopes can shed light on this dark period in their lives. Each of them struggles as they unburden themselves of painful memories they would rather forget.

Growing with every scene, the film builds an overall sense of dread as Folman recounts the story of his youth. Coupled with the realistic, and yet phantasmic, sometimes even mind-bending animation, the film’s intense mood seems like an ever-present beast that lurks behind every moment of the film, emerging only when Folman peels back the layers of memory to find the truth.

Ploddingly thoughtful, but mesmerizing and filled with heart-rending remorse, Waltz With Bashir succeeds as a drama that plants you on Folman’s path, reliving moments of horror, while searching for some underlying explanation.

The film eventually leads us to a dark corner of reality that simply cannot be expressed only in animation, closing with a few minutes of actual footage where we see the aftermath of the massacre.

Looking at all of the elements involved, Waltz With Bashir is a miracle of filmmaking, and Folman finds a way to weave the thread of his memory into a complex pattern that is brought into life by every frame of the stunning animation. Utilizing a combination of cut-out graphics, three dimensional techniques and classic animation, the film has a unique style that lends itself perfectly to the story.

The DVD comes with a number of thought-provoking and interesting features, which delve a lot deeper into the film’s heart and the production process behind it. All of the features are worth watching, especially as they examine how the film was made and how the animation style was accomplished, but the commentary track by Folman is far and away the most interesting, delving quite deeply into everything that makes Waltz With Bashir a powerful piece of cinema.

I Love You, Man
In this funny comedy about bonding and friendship, Peter, played by Paul Rudd, is about to get married. The problem is that there is one thing he hadn’t thought of before he proposed: who is going to be his best man? It is, after all, hard to choose your best friend when you don’t have any friends to begin with.

Going out of his way to meet new guys, Peter eventually finds the right man, although it remains to be seen if his fiancée, played by Rashida Jones, can put up with his choice in friends.

Starring Jason Segel as Sydney, the potential B.F.F., this amusing comedy was written and directed by John Hamburg, who also brought us Along Came Polly, and wrote Zoolander and Meet the Fockers.

Although the film mimics all of the conventions you expect in the genre, which is technically a romantic comedy, I Love You, Man takes every opportunity to break the mould, without ruining any of the jokes or getting needlessly ridiculous. At the same time the film works because Rudd and Segel are hilarious together, and make their characters seem like two ordinary guys who have become really close.

The film is most definitely a guy’s movie, but I think the ladies will get a kick out of the whole parade of guyness, even as the characters rock out to Rush.

Available on Blu-ray this week…

Starman & St. Elmo’s Fire
Sony Pictures released two classic 80s films on Blu-ray this week, and both look better than I ever could have hoped.

In John Carpenter’s Starman, Jeff Bridges plays a crash-landed alien who has taken the form of a widower’s dead husband. Karen Allen stars as his captive guide, who is helping him get to Arizona, even as the government searches for them.

Both films look excellent, but St. Elmo’s Fire is clearly the better package with the film’s colorful scenery popping in high definition. Meanwhile I was impressed with how well the visuals and effects in Starman held up, and the fact that the film looks incredibly sharp, even after all these years.

Starman unfortunately doesn’t come with any features, but St. Elmo’s Fire does have a few, including a great new interviews with Schumacher about the film, a commentary track, and a few features from the original DVD release.