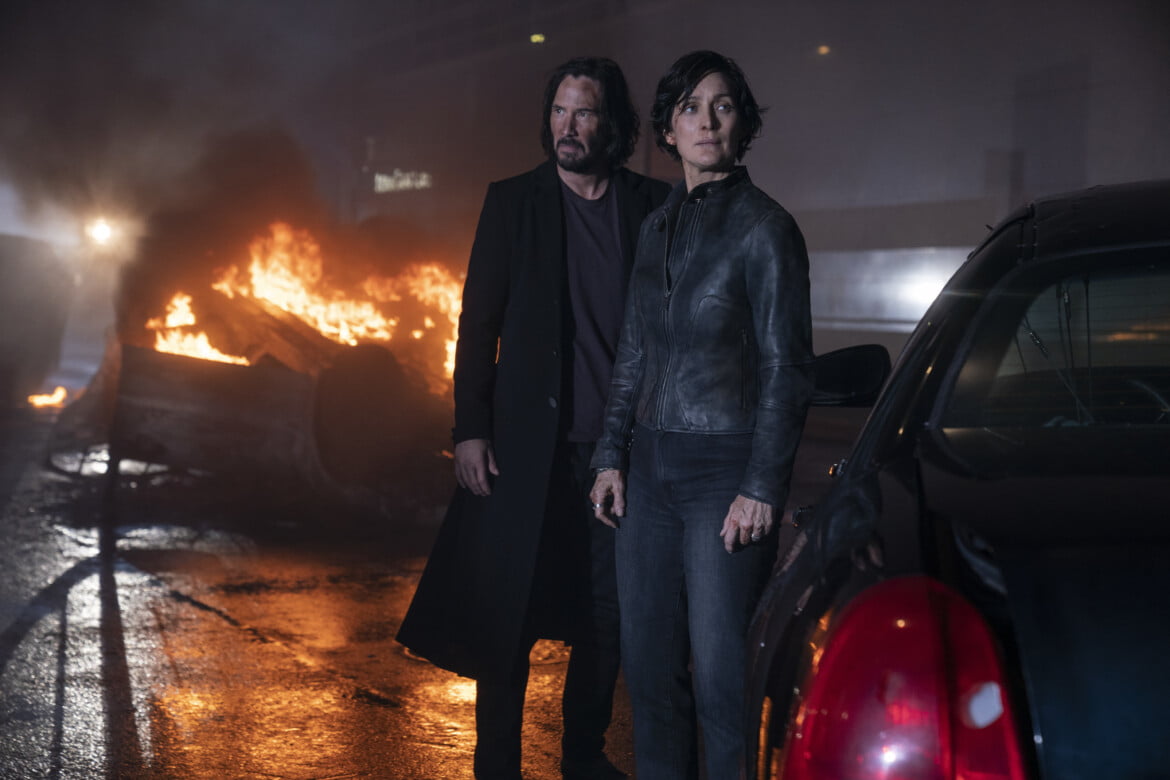 The first time I watched The Matrix in 1999 was like nothing else I had ever seen in a movie theatre. It felt like lightning, and it was one of the few films I saw again a week later.

Tempering a lot of ideas into one huge hero journey, The Matrix borrowed a bit from other films, but it created something new in the process, with a visual style that still stands out today.

Going back to The Matrix now, after so many years, comes with a lot of baggage and nostalgia, and it succeeds in feeling like a true return to this universe, but The Matrix Resurrections is going to be polarizing with audiences.

Director and co-writer Lana Wachowski returns to the franchise by starting The Matrix Resurrections exactly where the original film began, in a loop that’s part déjà vu, part rediscovery. This time, someone else is watching as Trinity takes on the Agents, and loses, and these newcomers are trying to figure out what’s going on.

And then we meet Mr. Anderson. It’s a minor spoiler, but to even talk about the film you have to know that Neo has apparently been trapped in the Matrix again, and his whole past is being played off as a psychotic break that’s still haunting him and his sanity.

Neo is reliving his past through video game design, and the people of the Matrix have made his Matrix games huge hits. It’s meta-meta-metaverse kind of stuff that’s fun, weird, and wonderful.

Working with a psychiatrist, played by a strangely perfect and yet also weirdly miscast Neil Patrick Harris, Neo is having a crisis, and he’s not himself any more, but maybe he could be. That’s where those newcomers come in.

From the start there are winks and nudges that remind us that Wachowski isn’t going to turn the original trilogy into a dream or something. We’re left wondering a lot of things, like how Neo survived the end of The Matrix Revolutions, how the Matrix is still working, and why Tiffany–aka Trinity, played by the great Carrie-Anne Moss–doesn’t remember Neo.

There are jokes that call out the original films, loving asides that honour the characters, and meticulously recreated effects from the franchise, and yet Resurrections is short on the one thing that it needs: new ideas. New anything, aside from a few characters, really.

From the start we get clips from the trilogy, call backs, memories, and tons of references to what made The Matrix great.

And that’s part of the problem. The old film clips don’t add anything to the film; they’re just references to old, past glory. It’s even tough because some of the few new details in the film don’t matter all that much to the story.

For a franchise that started with incredible ideas that felt unique and original in 1999, Resurrections just wants to tug at some nostalgia, make a few bad jokes, and revisit things we’ve seen before. The only plus is that it spends time giving Trinity some of her own power, but the film waits until the very end to focus on that, and then offers a big, goofy stunt as a payoff that doesn’t deliver.

Most of the problems all revolve around the weak script, but on the bright side, the film’s cast is great. Keanu Reeves and Carrie-Anne Moss, along with the rest of the wonderful cast are excellent. They know this world, and Wachowski obviously gave them a great sense of the world they’re exploring.

The action is great in many places, and the last third of the film flies. I also appreciate how the film resurrects core characters for a new era. Yahya Abdul-Mateen II as Morpheus was one of my favourites; he breathes incredible life into the iconic role.

Vital new characters include the wonderful Priyanka Chopra Jonas as Sati, and the scene-stealing Jessica Henwick as Bugs, who deserved to be the star, if you ask me. Henwick feels fresh, unique, and fun, and she’s pushed aside in the story far too often unfortunately.

On the complicated side of casting, I loved seeing Jada Pinkett Smith return as an aged Niobe, and she’s a powerful leader, representing both past, present, and future. The biggest problem is that the film, following story points we’ve seen before in the franchise, tries to make us care about the convoluted politics of the human refuge known as Io, that Niobe oversees, and that story didn’t feel like it actually mattered much.

Strictly as an action film, Resurrections is pretty good, and maybe for a lot of people that will be more than enough. Newcomers to The Matrix likely also won’t notice much wrong with the film, since it will all feel new.

And honestly, maybe the best and worst thing about the film is that it’s really a reboot, and spends too much time justifying how dead characters have returned, without giving them anything particularly interesting to do. A better reboot of the story would have revolved around Bugs and Trinity more, perhaps, while finding some new ground to explore.

Returning to The Matrix, both as a franchise and a universe, is a real treat in some ways, and I hope it leads to some new Matrix stories. I’m just happier right now to go rewatch the original.

The Matrix Resurrections is in theatres now.