Sneaking a peek at ‘Tron Legacy’ in Toronto 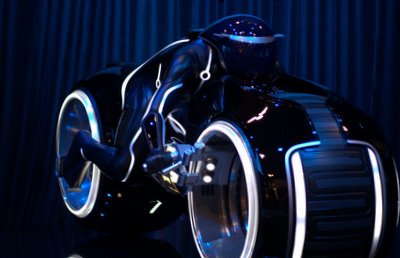 Last Friday was a very good day for me and a couple of hundred other Tron fans. Sitting in a meeting room at the Metro Toronto Convention centre while a Daft Punk track played on repeat, I waited with a packed room full of fans intent on a hour-long event with film producer Justin Springer, who was in town to talk about his new film, Tron Legacy.

Held during this year’s Fan Expo, the Tron preview was a complete surprise to many, and also a rare event. As far as I know only the assembled masses at the San Diego Comic-Con have had the same treat, and outside of that, I can’t recall the last time Toronto has ever played host to an advance preview like this, aside from during the annual film festival.

Tron Legacy was announced during last year’s San Diego Comic-Con, and is the first sequel to the 1982 cult classic Tron. In the original, Jeff Bridges played Kevin Flynn, a hot shot software designer who ends up encoded inside a computer system where he has to fight against a powerful entity known as the Master Control Program.

Although Disney didn’t allow recording of the event, not even during the Q&A with Springer, I kept a pile of notes as he talked. I also had the chance to interview Springer on the show floor where the studio was displaying their mock-up of the new light cycle from the film (watch the video at the end of this article).

With production wrapping up in Vancouver earlier this summer, Springer was quick to point out that what we were getting was a quick peek at their work so far. While none of the special effects sequences were ready, Springer had a number of concept art pieces to show us, in addition to some test stunt footage, the teaser trailer that’s all over the web, and a short early scene from the film.

Leading up to this, Springer had a lot to say about the why and the how of the project. Praising the original 1982 film for its landmark style, which he thought still held up all these years later, Springer said that the key to the project was keeping the timeless feeling alive.

Filmed entirely in 3D, he also said that the new film would be “darker, more realistic, and bigger” than the original, and then showed the assembled, and sufficiently impressed, fans artwork of what the computer world will look like this time around.

Following the visual cues from the first film, the new art looks easily recognizable, and yet wonderfully advanced. He showed us samples of a few different Light Cycles, a Solar Sailor, a Recognizer, and a new off-road vehicle that he called a Light Runner.

During the chat he also confirmed that yes, Bruce Boxleitner will be back again, and Daft Punk really are doing the entire score for the film. He also said that the release date is 16 to 18 months away – in other words, at the end of 2010 (or at worst, the beginning of 2011). He also was big on pushing the fact that Tron Legacy will have “a lot of really cool new stuff.”

Next, Springer showed us maybe the coolest part of the presentation, which was sample footage of a loop-kicking stuntman showing off his moves. While loop kicking is not exactly unknown, I had a hard time finding any footage that lived up to the calibre of what I saw in this footage. To explain it though, loop kicking is a mixture of martial arts and acrobatics, and in this footage the guy kept doing full head-over-heels kicks in the air, without any wires or springboards while holding a disc. Very, very cool stuff.

Leading into the Q&A, Springer then showed us the only complete footage they have from the film so far – an early scene where Kevin Flynn’s son, Sam Flynn (played by Garrett Hedlund) discovers his father’s original arcade, and a secret passageway hidden behind a Tron arcade game.

With loads of passion for what he was presenting, Springer also reinforced the fact that the filmmakers are very confident in first-time director Joseph Kosinski.

While I’m generally unnerved by first time directors getting their hands on films like Tron Legacy, I have to admit, this may be the right guy for the job. As a former architect, and the man behind numerous amazing ads (like the original Gears of War ad with the music from Donnie Darko, or the last big Halo 3 promo, Starry Night), he is obviously very talented.

It also doesn’t hurt that the original Tron writer and director Steven Lisberger is on board for the sequel, acting as a producer.

You can watch my interview with Springer below, where he explains the steps being taken to make sure the sequel is as good as possible. Otherwise, stay tuned for more coverage over the coming months.