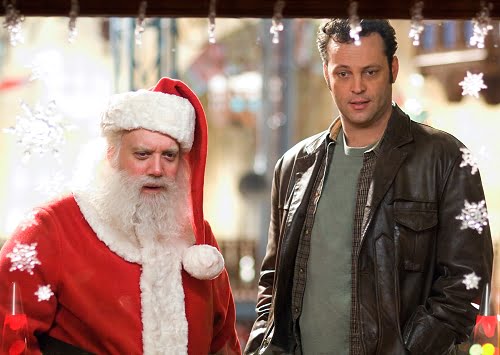 This week, at a theatre near you: Fred Claus pays a visit to his Saintly brother at the North Pole, Robert Redford returns to the directing chair for a political drama, and a thriller pits a young woman against a psycho in a dark parking garage.

Fred Claus
This movie has me hooked on the cast alone. Vince Vaughn is Fred Claus, the imperfect brother of one of the world’s most loved people, the one and only Saint Nick. Paul Giamatti plays Nicholas, who tries to put his little brother to work with the elves, but finds that Fred might end up turning the holiday into a disaster. The casting of Giamatti and Vaughn together for this film is reason enough to get most people watching, although it’s also worth noting that the film includes talent from a number of great filmmakers, and co-stars Kathy Bates, Kevin Spacey, and Rachel Weisz. While the plot is bound to be wrapping-paper thin, nothing says the holidays like a great slapstick comedy.

Lions for Lambs
With the debate still raging on current war efforts, Robert Redford’s latest film is bound to stir up some intense emotions. The film stars Redford, Meryl Streep and Tom Cruise in the unfolding story of two men who decide to fight in the Afghanistan war. Their story is intertwined with other people however, and it is only through delving into all three tales that we discover the way that everyone affects each other. Political films usually garner a bit more scrutiny on their way to cinemas, and already Lions for Lambs has attracted positive and negative reviews for the way it asks questions of the American public. All told however this is an unlikely film to top the box office this weekend, but it is sure to be an intelligent drama.

P2
On Christmas Eve, Angela finds herself leaving work late, only to become trapped in the parking garage with a psychotic security guard who has had his eye on Angela for some time. She can’t start her car, her phone won’t work, and the lights have all gone out, and all she can hope to do is fight to escape, and stay alive. Starring usual film creep Wes Bentley as Thomas the guard, and Rachel Nichols as Angela, the film is genuinely creepy and disturbing. Early online reviews have been mixed, but this is sure to be a dark thriller.

Opening in a limited number of cinemas this week is also director Ridley Scott‘s Blade Runner: The Final Cut. The latest edit of the film has been completely restored and remastered, and includes a number of scene changes that have either been lengthened or cut down. Easily one of the greatest sci-fi movies ever made, this is worth a look if for no other reason than to see it on the big screen again before the DVD release later this year.

And finally, the Coen Brothers bring their western thriller, No Country for Old Men to select theatres this week. The Coens are incredible filmmakers, and critics have been praising this film ever since it made an appearance at the Toronto Film Festival earlier this year. Todd McCarthy of Variety remarked on the film in his review, calling it “a scorching blast of tense genre filmmaking shot through with rich veins of melancholy, down-home philosophy and dark, dark humor.”