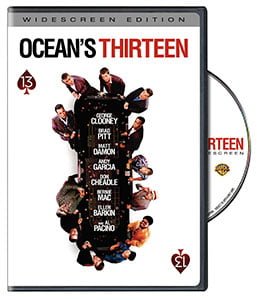 This week on DVD: Shrek is back for another adventure, Ocean’s crew sets their sights on a Vegas casino again, a British politician commits his life to fighting slavery, and two classic films arrive in new special editions sets.

Shrek the Third
Mike Myers is Canada’s comic champion, and while he has had a lot of success over the years, none of his roles stand as tall as the larger than life ogre known as Shrek. In the latest film, Shrek and Princess Fiona (Cameron Diaz) are expecting a baby while Fiona’s father (John Lithgow) lies on his death bed. At the same time Prince Charming, voiced by Rupert Everett, is plotting to take over the kingdom with the help of any scoundrels he can find. While there’s a lot going on, Shrek the Third is sure to amuse kids and kids at heart. The film also co-stars Shrek’s best friends, Eddie Murphy as Donkey, and Antonio Banderas as Puss in Boots.

Ocean’s Thirteen
Steven Soderbergh‘s clever, creative films about a group of smart con artists may be driven by star power, but there’s no doubt that the Ocean’s series keeps entertaining with curve balls and wry jokes. In the latest planned caper, Danny Ocean (George Clooney), brings his group of usual suspects together against Willie Bank (Al Pacino), a high-end Vegas casino owner who cheats Danny’s friend Reuben (Elliott Gould) out of his share of the business. Co-starring Brad Pitt, Matt Damon, Don Cheadle, Casey Affleck, and Scott Caan, Ocean’s Thirteen delivers laughs and some solid action. The film isn’t quite as flash as Ocean’s Eleven, but it’s still a treat.

Amazing Grace
Amazing Grace is one of those great films that just seemed to slip between the cracks. While it may not be Citizen Kane, it’s still a stunning period drama by director Michael Apted. Set in Britain, the film follows the real-life work of William Wilberforce, a British politician who fought to end slavery within the British Empire. Starring Ioan Gruffudd as William, Albert Finney as John Newton, and Michael Gambon as Lord Fox, the film is touching and eye-opening for anyone who doesn’t know the history, even if the film does twist the truth a little. Amazing Grace also shines because it keeps this historical touchstone away from melodramatic territory.

Close Encounters of the Third Kind
Steven Spielberg‘s landmark film arrives with a brand new special edition this week to celebrate the film’s 30th anniversary. Richard Dreyfuss is Roy, a man obsessed with making contact with alien life after he sees a UFO. Despite numerous unbelievers, scientists notice increased alien activity around the world, and they work to make contact with the aliens that seem to be reaching out to humanity. The new special edition DVD is full of new content and features, and also includes all three cuts of the film from 1977, 1980, and 1998.

The Princess Bride
Also coming out with a new special anniversary edition this week is Rob Reiner‘s classic The Princess Bride. Told through a storybook narravtive, the tale follows the adventures of Buttercup (Robin Wright), and Westley (Cary Elwes). Buttercup is being held captive by Prince Humperdinck (Chris Sarandon), who is preparing to marry her, while Westley is fighting to reach her. Along the way he meets a trio of culprits trying to stop him: Vizzini (Wallace Shawn), Inigo Montoya (the unbelievable Mandy Patinkin) and Fezzik (AndrÃ© the Giant). A charmingly disarming tale throughout, The Princess Bride is still one of my favorite films from the last 20 years.

Also out this week is a special gift set edition of Ghost Rider, which features the DVD and a statue. There are also three new TV seasons on DVD, including the complete Addams Family, the complete Miami Vice, and Gilmore Girls season seven.