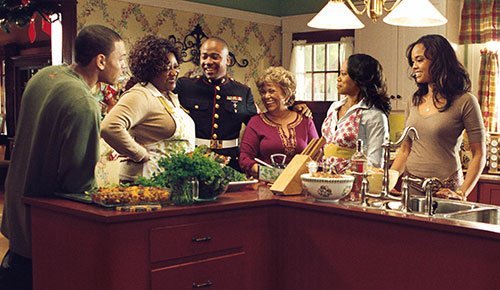 Films arriving this week include another creepy Stephen King tale, an action adventure about a hitman, the story of a young man’s musical search for his parents, the modern tale of a princess in Manhattan, a family Christmas movie, and the dysfunctional relationship between two sisters.

Stephen King’s The Mist
Ready for a fresh take on a Stephen King horror story? Frank Darabont, the director of King’s The Shawshank Redemption, brings this story to life about a strange fog that rolls into a small town and brings a swarm of horrific creatures with it. A group of people huddle inside a supermarket to avoid the creatures outside as they also try to uncover the truth about the mist. Early reviews were generally negative, which is to be expected for a film like this, but if you like horrific creature films this probably isn’t a bad bet for you. With stars Thomas Jane, Marcia Gay Harden, and Laurie Holden it’s also not a bad looking cast.

Hitman
Timothy Olyphant can do no wrong in my books, but at the same time I’m really not expecting much of his portrayal of Agent 47. Based on a video game, which says a lot right away, the film is about an assassin who gets caught up in politics and is then hunted by military forces. As you might expect, the movie has received a lot of bad reviews, but action junkies may still swarm theatres.

August Rush
August Rush (Freddie Highmore) is a young musical genius living in an orphanage when he discovers that his parents may still be alive. Heading to New York City to perform, he begins his search for his mother and father (Keri Russell and Jonathan Rhys Meyers) while performing on the street. Critics have been mixed, but generally positive. Kirk Honeycutt of the Hollywood Reporter perhaps summed it up best: “An often charming urban fantasy that teeters perilously on the brink of preciousness but never quite topples over.”

Enchanted
Amy Adams stars in Enchanted as Giselle, a princess with visions of “happily ever after” who finds herself banished from her kingdom by an evil queen, played by Susan Sarandon. The twist is that Giselle is tossed not just from her kingdom, but completely from her animated world, landing in Manhattan. As she tries to adjust she finds herself falling for a divorce lawyer (Patrick Dempsey) even as her prince (James Marsden) comes chasing after her. Overall, reviews have been glowing, with a lot of praise for Adams and the excellent story. As Ann Hornaday of the Washington Post put it, “That rare comedy that will appeal to the whole family, as it indulges in all the dreams of fairy-tale romance while making a few 21st-century adjustments.”

This Christmas
Feeling the Christmas spirit yet? If not, This Christmas could be the ticket for you as a family reunites during the holidays for the first time in years. As chaos takes over, family secrets are coming out of the woodwork, and tension is everywhere. This Christmas mixes a family drama with the unmistakable holiday comedy, and features a great cast that includes Regina King, Chris Brown, Loretta Devine, and Mekhi Phifer. Lael Loewenstein of Variety also called it “a rare holiday treat, a package that’s both thoughtfully selected and sure to please its intended recipients.”

Margot at the Wedding
Two dysfunctional sisters take centre stage in writer and director Noah Baumbach‘s latest film. Following his fantastic The Squid and the Whale from 2005, his latest story bares some similarities, but takes a whole new angle on the drama. Nicole Kidman is Margot, a writer and mother who goes home to visit her sister, Pauline (Jennifer Jason Leigh), who is about to get married. Jack Black plays Malcolm, the insecure fiancÃ©, and Zane Pais is Margot’s son. Baumbach’s incredible dialogue is a gift to this film, but generally this will be a very hard film to sell to most people. It is a smart story, but it’s almost unlikably intense.