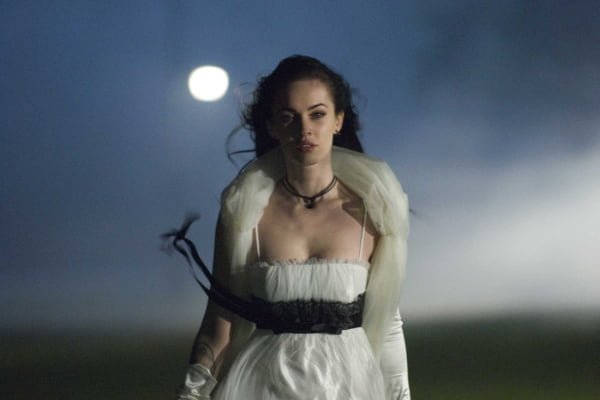 Opening in theatres this week, two Toronto International Film Festival picks make their debut; the teen-horror film Jennifer’s Body, and Steven Soderbergh‘s The Informant! Also new to theatres, Bill Hader stars in the animated tale Cloudy With A Chance of Meatballs, and Aaron Eckhart and Jennifer Aniston look for romance in Love Happens.

Jennifer’s Body
Academy Award-winning screenwriter Diablo Cody has an intriguing sense of style. In her film Juno, she got into the mind of a high school girl struggling with pregnancy, and now in Jennifer’s Body, she’s exploring a different high school angle as a beautiful girl deals with her new urges to hunt and eat the boys at her school.

Thankfully, the only thing that connects Cody’s last film to Jennifer’s Body is the whole high school thing, and the way she seems to be able to write dialogue that sounds right when it comes out of Megan Fox’s mouth. While I’m curious when Cody will move on to a project that doesn’t include teenagers, she is good at what she does, and there are more than a few moments where it all works quite well for this particular film.

Set in the small town of Devil’s Kettle, Fox plays the super hot Jennifer, a girl with sex on the brain, who drags her best friend Needy, played by Amanda Seyfried, to see her new favorite band, Low Shoulder. As we quickly see though, the band isn’t really there for the fans, they’re actually looking for someone to help them, and Jennifer ends up being the unsuspecting victim.

Whisked away from the bar, which ends up burning to the ground and killing numerous people in the process, Jennifer disappears with the band while Needy has to find her own way home. Hours later, Jennifer shows up at Needy’s home though, only now she is covered in blood, acting strange, and vomits black goo all over the kitchen floor.

From there we definitely see that Jennifer just isn’t right, seducing guys from her school before she freaks out and starts gnawing on their innards, while Needy tries to piece together what’s really happening to her friend.

Covering lots of ground we’ve seen before, with retro panache but very little in terms of scares, the film is still somewhat entertaining, and I think Fox and Seyfried make a good pair in this bizarre teen tale of horror. The truth is though that Director Karyn Kusama is not up to the task of really making Cody’s script amaze us or frighten us, although it can also be said that the script also plays it way too safe. We know very early where we’re headed in the film and it goes without saying that it will wrap up in much the same way as these films always end.

All things considered, I still enjoyed Jennifer’s Body for what it is – a light and funny quasi-horror film that has fun with the material. Fox has a couple of very good scenes which maybe prove she can eventually move on to roles that deal with more than just her complexion or her curves, and I think she also aptly proves that she can lead a film based on her charisma.

Ironically enough, it’s also worth saying that the film is rated ‘R’ in the U.S., so it’s bound to be another one of those films teens will see, despite the rating.

The Informant!
Matt Damon stars in Steven Soderbergh’s The Informant! as that special class of corporate citizen: the whistleblower.

With director Soderbergh at the helm, who also brought us Ocean’s Eleven and the other sequels, you can expect a twisting tale that will only resolve itself when he’s good and ready to reveal everything, and based on reviews, the good news is that critics are saying the recipe generally works.

“The Informant! is a return to form for Soderbergh, who couldn’t seem to put anything resembling an emotional charge into his recent films,” David Denby wrote for the New Yorker. “This time, Soderbergh is in full control, and his star is on fire.”

Cloudy With A Chance of Meatballs
Based on the popular children’s book, Cloudy With A Chance of Meatballs is an animated movie about an inventor and a weather girl who are trying to solve the riddle about the falling food. You see, rather than rain falling from the sky, a small town is experiencing the unexpected phenomenon where everything from candy to, yes, meatballs, is dropping out of thin air.

Starring the voices of Bill Hader, Anna Faris, Bruce Campbell, Mr. T., James Caan, and Adam Samberg, Cloudy With A Chance of Meatballs is looking like an instant hit for families this weekend. As Alonso Duralde of MSNBC wrote, the film is “overstuffed with enough sight gags to delight children while throwing in healthy dollops of wordplay and absurdist humor to keep their adult chaperones entertained as well.”

Love Happens
Lastly this week, Aaron Eckhart and Jennifer Aniston star in a romantic drama about two somewhat broken people who can’t keep their eyes off each other.

Well, I’m going to take a guess and say yes, but it is a little tough to say. Very few reviews were available at press time, but Randy Cordova of the Arizona Republic was not a fan of the film.

“Because there’s no mystery, no chemistry and paper-thin characters, the movie coasts by on the charms of its two stars,” Cordova wrote. “And while Eckhart and Aniston are mighty appealing, they need to be given something more with which to work.”