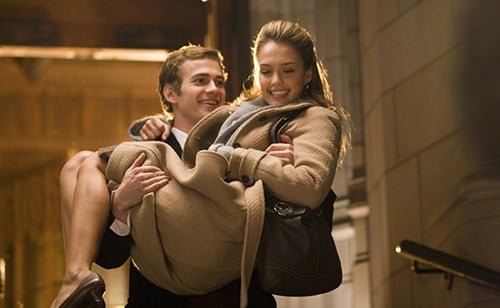 The steady flow of movies slows down a bit this week before the big December rush, but there are a few films headed to theatres this week. If you can stomach it, a new thriller arrives in theatres, plus the many lives of Bob Dylan come to the big screen, Woody Allen debuts his crime melodrama, and a family gets in trouble at the West Edmonton Mall.

Awake
As more and more psychological thrillers flood the market, Hollywood seems to be reaching into the most obscure realms for frightening story ideas. Awake seems to be a great example of that with Hayden Christenson taking on the role of a patient in surgery who finds himself aware of everything that is going on while he is supposed to be under anesthesia. Jessica Alba co-stars as the pretty, young wife who has to deal with her husband’s surgery, and her own demons. The idea might be somewhat fresh, but nothing about the film stands out as anything more than another basic thriller. This is also the first film for writer/director Joby Harold – a bad sign unto itself – and Alba has been appearing in a lot of cheesy movies recently. There aren’t any advance reviews, so this is just a guess, but all signs point to this being a thriller you can rent when it arrives on DVD.

I’m Not There
This one takes the cake for experimental filmmaking, but is it artful enough to pull off a strange premise? I’m Not There casts six actors in the role of legendary musician Bob Dylan. Rather than attempt to have one actor play the many aspects of Dylan, director Todd Haynes spins six tales through six versions of the man, including two female-led roles. A lot of the buzz for the film has been squarely centred on Cate Blanchett‘s role as Jude, but considering Blanchett’s incredible work in every film she’s ever been in, this shouldn’t surprise anyone. While it’s hard to pin the film down with one paragraph and a quote, Ann Hornaday of the Washington Post says it best: “[I’m Not There is] an absorbing, occasionally hallucinatory disquisition on how Dylan has brilliantly eluded his audience’s projections.”

Cassandra’s Dream
Starring Ewan McGreggor and Colin Farrell, Cassandra’s Dream is the latest from virtuoso filmmaker Woody Allen. Following in the footsteps of his previous film Match Point, his new film is set in London and follows two brothers who are having financial troubles, but quickly get swept away into a tangle web that ends in murder. Although the film is primarily a drama, it also has elements of being a melodrama and a thriller. Critical reviews from recent film festivals haven’t been exactly kind to the film, but McGreggor and Farrell have been praised for keeping the film moving even as the plot gets overly tangled.

Christmas In Wonderland
Depending on how you look at this one you can either call Christmas In Wonderland imaginative or silly. Starring Chris Kattan, Carmen Electra, Patrick Swayze, and Tim Curry, the film follows a family that move all the way from Los Angeles to Edmonton and end up shopping in the gigantic West Edmonton Mall on the day before Christmas. Mayhem breaks out when the two kids discover a bag of fake money and go on a spending spree as the criminals and the cops chase after them. There are no early reviews out yet to prove this, but all signs point to Christmas In Wonderland being a tragic waste of time, not to mention the career of the great Tim Curry.