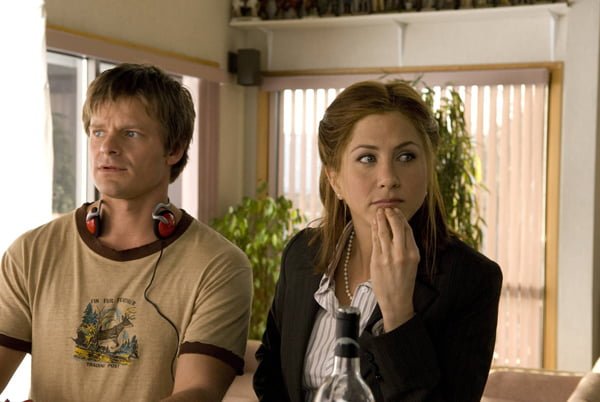 New on home video this week, Steve Zahn and Jennifer Aniston star in the indie-romantic comedy, Management; Monsters vs. Aliens brings the battle of the b-movie creatures to earth once more; plus I take a look at The Girlfriend Experience, and re-releases of the Wizard of Oz, The Dark Crystal, and Labyrinth on Blu-ray.

Management
Off the top, I almost dismissed Management before I even watched it. Even when you consider that the film stars Jennifer Aniston, the plot sounds like an indie disaster waiting to prove itself, and honestly I was a bit turned off by the idea of casting Steve Zahn opposite Aniston as the zany love interest.

And yet, the film intrigued me all the same. The first fifteen minutes can be a bit squirm-inducing, but it doesn’t take long for Management to reel you with its heart, oddball premise, and easy humour.

Set in small-town Arizona, Zahn plays Mike, the night manager at his parent’s motel who is busy doing nothing much at all when Sue, played by Aniston, walks into his life. Staying at the motel during a short business trip, Sue immediately catches Mike’s eye, and he finds any excuse he can to try to seduce her. When it unexpectedly pays off, at least a little, Mike begins what will turn into the trip of his life, following Sue at first to her home town, and then across the country.

With awkward moments interspersed between heartfelt laughs, and goofy stunts, Management won me over in the end because it simply makes fantastic use of Zahn and Aniston. While Aniston plays a guarded, tightly wound woman with a purpose, Zahn is the loose canon, a ball of emotion, and the guy who’s ready to leap at any opportunity to be with this reserved but charming woman.

In many of his other films, I don’t think Zahn has had nearly as much opportunity to shine, or the direction for that matter, but Management is a gem of a movie because Zahn has everything he needs. Aniston is the perfect co-star here, and Zahn pulls in his wilder instincts for some wonderful scenes, including with co-star James Hiroyuki Liao, who plays Mike’s new best friend, and even Woody Harrelson, who plays Sue’s crazy ex-punk lover, Jango.

The only complaint I can hold against Management is that it is predictable, as so many of these romantic comedies are, but the film also plays fast and loose with your average plotline and wins because of that gamble.

Voiced by the likes of Reese Witherspoon, Hugh Laurie, Will Arnett, and Seth Rogen, the animated adventure has a small group of Earth’s monsters coming to humanity’s rescue when aliens arrive to take over the planet.

With more than a few winks and nudges for parents, who will surely recall some of the films being lampooned in Monsters vs. Aliens, this is a definite kids movie, complete with random juvenile humour.

From a family perspective, the film is a sure hit, although it’s worth pointing out that few critics raved about the film. Betsy Sharkey of the Los Angeles Times has the most even-handed review of the film, praising Monsters vs. Aliens, while admitting it’s not exactly a genre-defining film.

“‘Nice’ is the adjective that seems to surface most in trying to pin down the film’s most salient quality,” Sharkey wrote, “which means that while the film is enjoyable enough, it is unlikely to become a classic for us, or a Shrek sort of franchise for DreamWorks.”

What sets The Girlfriend Experience apart from his other films is the fact that it’s really quite a small documentary-style drama that peers into the lives of two people during the American presidential election in October 2008. Dealing with the financial crunch in the country from their perspectives, and the people around them, the heart of the story is how Chelsea, a high-end escort played by adult-film star Sasha Gray, deals with her relationship with her boyfriend Chris, played by Chris Santos.

Cutting back and forth between moments in the couple’s lives, and their careers, the film is lean on emotion, but loaded with social commentary. Certainly the story is about these two people, but at times you could say that the commentary has better lines than the stars themselves. Gray is also not quite up to the challenge of wringing all of the emotion from this intense young woman, and although she brings a certain legitimacy to the role, and a heartfelt core, there is something missing in the more honest moments of the film.

Wizard of Oz [Blu-ray]
The film is a classic, and marking the 70th anniversary this year, Warner Bros. is debuting a new special edition on DVD and Blu-ray this week, complete with loads of extras and special features.

Although the Wizard of Oz has been on DVD numerous times before, the new Blu-ray release is worth a look for high definition fans and comes with a handful of new features, and a few high definition exclusives, like an extended version of Ray Bolger performing “If I Only Had a Brain.”

The Dark Crystal & Labyrinth [Blu-ray]
Finally, I think it’s worth mentioning that the classic 80s films The Dark Crystal and Labyrinth both arrive on Blu-ray this week. Although the films are showing their age a little, they are both the kinds of films that beg to be seen once again in a definition worthy of their cinematography and eye-catching scenery.