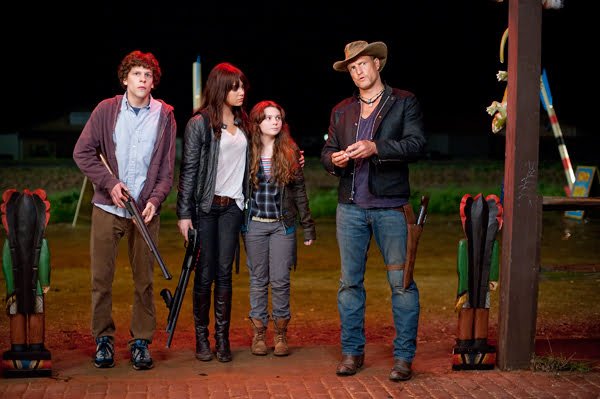 The cast of Zombieland

Once again, theatres are jammed with new releases, and the good news is that this is a banner weekend for movies with most of the films getting great early reviews. Coming out this weekend we have the horror/comedy Zombieland, Michael Moore‘s Capitalism: A Love Story, the comedy The Invention Of Lying, Drew Barrymore‘s Whip It, and the re-release of Toy Story and Toy Story 2 back-to-back in 3-D.

Zombieland
It has to be said, Zombieland is the feel-good zombie movie of the year, and it’s long overdue to see someone come up with a new angle on the whole zombie premise.

Setting itself apart from you average zombie movie, director Ruben Fleischer’s Zombieland is a fun, fresh, laugh-out-loud trip across a ruined America where the new national pastime is killing zombies. In the vein of Shaun of the Dead, the film is a tongue-in-cheek romp that comes through with lots of laughs, and more than a little heart.

The oddest part is that, for a zombie movie, the film is incredibly high spirited. There is a constant sense of doom around the corner, but that’s eclipsed by the barrage of sight gags and jokes delivered by this clever group of actors, and the brilliant script that’s stuffed with witty dialogue and bloody good humour.

Capitalism: A Love Story
One of America’s more controversial directors, the one and only Michael Moore, is back again and this time he’s taking on the volatile topic of the financial crisis that shook up the world in 2008.

Known for his slanted documentaries, which are obviously biased to his own point of view, Capitalism is a critical attack of the U.S. government’s bailout strategy, while also attacking the businesses that ended up consuming American tax payer dollars.

Reviews are coming out on the positive side, but many critics concede that the film has its flaws. As Owen Gleiberman of Entertainment Weekly wrote, “At its best, Capitalism: A Love Story is a searing outcry against the excesses of a cutthroat time. At its worst, it’s dorm-room Marxism.”

The Invention Of Lying
What if you lived in a world where no one lied, and suddenly realized you didn’t always have to tell the truth?

Written and directed by Ricky Gervais and Matthew Robinson, The Invention Of Lying is a clever concept comedy that stars Gervais as Mark, the lucky guy who figures he can do anything if he lies. Paying off with benefits around every corner, the only problem is that, well, people are actually believing him. He also can’t seem to win the heart of the woman he loves with any of these lies.

Co-starring Jennifer Garner, Jonah Hill, and Rob Lowe, the story is a fun commentary on the nature of lies, and why we tell them in our day-to-day lives.

The film is getting above-average reviews from most critics. As Edward Douglas of ComingSoon.net noted, The Invention Of Lying is “an okay film with a funny premise that offers enough laughs to excuse the weaker direction.”

Whip It
In the first film from director Drew Barrymore, Ellen Page stars as Bliss, a new player in the often bruise-inducing sport of roller derby. Although Bliss is being pressured to enter beauty pageants by her mother, that’s not the kind of thing she wants to do with her life. The trouble is, if her mother ever does find out what she’s really doing, that could be the end of it.

Debuting at the Toronto International Film Festival, the film has been getting big praise from critics. Peter Brunette of the Hollywood Reporter wrote, “Some old material given a delightful new grrrl-power twist.” While David Edelstein of New York Magazine said, “Barrymore hovers over her actresses like the nicest, most nurturing den mother imaginable, and on its own, Go For It formula terms the movie delivers.”

Toy Story & Toy Story 2 (Double-Feature)
Lastly, in preparation for next year’s release of Pixar’s Toy Story 3-D, Disney is re-releasing the first two Toy Story films in 3-D this weekend. With the voices of Tom Hanks, Tim Allen, John Ratzenberger, and many others, the films were essentially what first put Pixar on the movie map, showing that kids movies could be clever and funny.

In these groundbreaking animated films the story revolves around a group of toys and their exploits when no one is looking. For those who haven’t seen these films yet, or parents with younger children who missed the films, now is a great time to see what you’ve been missing.