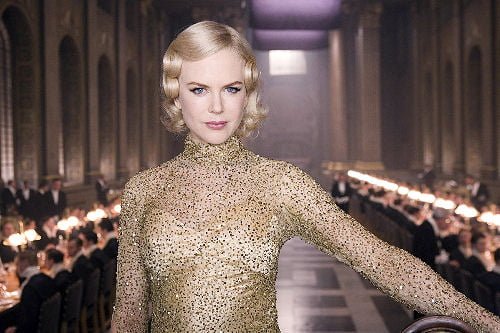 Nicole Kidman in The Golden Compass

The Golden Compass
The Lord of the Rings, and even Harry Potter, paved the way for epic fantasy on the big screen, and over the years there have been a handful of films trying to duplicate that success. While The Golden Compass doesn’t look quite as masterfully put together, there is hope that this could be an enthralling series.

The story is a bit confusing, but it follows a young girl named Lyra (Dakota Blue Richards), who lives in an alternate universe where people’s souls manifest themselves as talking animals. She sets out to rescue a friend from a group known as the Gobblers, but ends up fighting to save her world, and all of creation. At the heart of her story is the magical golden compass she was given that is connected to all the universes.

Based on Philip Pullman‘s trilogy of books, His Dark Materials, The Golden Compass looks like a great adventure, has spectacular visuals, and features Nicole Kidman, Daniel Craig, and Christopher Lee. Overall the film seems a bit dark, and some reviewers have complained that the film is too rushed and confusing, but ComingSoon.net had a positive review, saying “Once you get past the confusing premise, it’s easy to enjoy the film as an epic sci-fi fantasy adventure.”

Opening in a limited number of theatres this week:

Atonement
Ready for another period film starring Keira Knightley? She seems to pick a lot of films set in times that require special costumes, but it looks like this could be one of her best films to date.

Starring James McAvoy, and based on the much-praised Ian McEwan book, Atonement is a romantic drama about two lovers torn apart by a jealous sister who is too young to understand what she has done.

Critics have been very positive about the film, with Derek Elley of Variety commenting, “Rarely has a book sprung so vividly to life, but also worked so enthrallingly in pure movie terms.”

Grace Is Gone
John Cusack is one of those great actors who manages to step between dramas and comedies without any problems. In his latest film, Cusack subdues his charismatic style for the role of the reserved, and quiet Stanley Phillips. Having been denied his dream of being in the military, Stanley works at a local store and takes care of their two girls while his wife, a Sergeant, goes off to war in Iraq.

When Stanley is confronted with the death of his wife, he can’t come to terms with telling the girls, and ends up on a sudden road trip to delay the inevitable. As they travel however, Stanley finds himself bonding with his children like never before.

Reviews are mixed for the film, with complaints about it being plain and too low-key, but Variety and Rolling Stone both have good things to say about Cusack and the fact that the story feels so real.

Revolver
Jason Statham and Ray Liotta star in Guy Ritchie’s latest film about thugs and criminals. Suffice it to say, if you liked Ritchie’s previous films you’ll probably enjoy this one too, but reviewers haven’t been kind to the film, which many are calling a retread of his other work.

Primarily a comedy, Walk All Over Me is a lot of fun, and manages some decent action scenes. The film could have been a bit more original, but it’s still worth the price of admission.