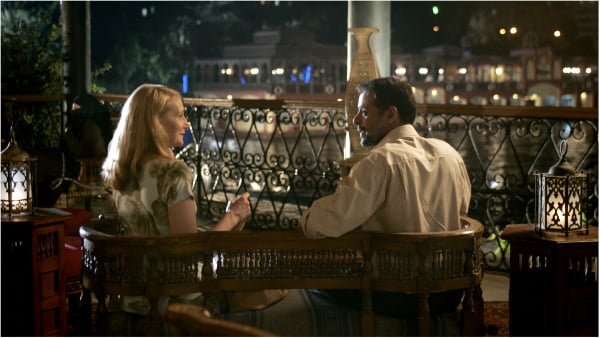 Opening in a limited number of theatres this week, writer and director Ruba Nadda‘s award-winning film Cairo Time stars Patricia Clarkson as a woman facing love in a strange city. Plus, Vince Vaughn stars in the farcical comedy Couples Retreat, and we take a quick look ahead at films coming later this month.

Cairo Time
Ruba Nadda is no stranger to filmmaking; since 1997 she’s been writing and directing films that have travelled film festivals around the world. As with many talented Canadian directors though, it can sometimes take time, and a little bit of luck, to make a name in this expansive country, but with Cairo Time, I think Nadda has made a film that will put her career on a whole new level.

Debuting at this year’s Toronto Film Festival, where Cairo Time won the award for Best Canadian Feature Film, the film stars the lovely Patricia Clarkson as Juliette, an overworked magazine editor on vacation in Cairo so she can spend some time with her husband, Mark (Tom McCamus), a busy UN official working in the area.

As she arrives in the city her plans are changed abruptly when Mark doesn’t show up at the airport, sending his best friend and former co-worker Tareq, played by Alexander Siddig, to pick her up instead.

Missing her husband, and with nothing else to do, Juliette tries to find other ways of spending her three weeks of vacation in the busy, beautiful city, going off on solitary adventures until she realizes she could spend some of her time with the only other person she knows in the city.

Running a coffee shop, Tareq is retired from the UN, and it doesn’t take long before he becomes Juliette’s almost constant companion. It also isn’t long before things change between them, and as the days pass, feelings start to develop between the two, tinting their adventures across the city in a confusing mix of emotions.

With stunning visuals courtesy of cinematographer Luc Montpellier, and a perfect score by Niall Byrne, Cairo time is an absolutely beautiful film that wrings a lot of emotion and thought from its careful pacing. While many films seem to be afraid of silence and space, Cairo Time seems to slow the world down, giving the actors and characters room to breathe.

Speaking of the actors, Clarkson and Siddig are wonderful in their roles, with Clarkson carrying the film’s storyline with utter ease, and making Juliette’s character seem somewhat sad, reserved, conflicted, and yet unmistakably vibrant. Her role as this almost lost soul, in a city of unending wonders, is beautiful to watch, and ultimately quite heartbreaking.

Putting emphasis on the film’s title, Cairo Time is a fresh and different take on the standard romantic drama, and Nadda and her cinematographer have painted a lovely picture of Cairo – one that feels both realistic in showing the city’s flaws, and yet incredibly beautiful. If you have the opportunity to see this film, I highly recommend it.

Couples Retreat
What happens when four couples find themselves on a special retreat meant to help fix troubles in their relationships, that actually turns into a down and out disaster?

Set at tropical resort that’s packed with activities, the four couples find out that despite their plans to enjoy themselves, the instructors definitely do not consider their therapy sessions optional.

Putting it simply, the film is earning poor reviews from the majority of critics and clearly looks like a waste of time, not to mention film.

“What’s depressing is that there’s hardly a creative spark in this sour, offensive, contrived story, and its sloppiness is more consistent than its comedy,” Mary Pols of Time Magazine wrote.

Ty Burr of the Boston Globe essentially agreed with Pols, writing in his column, “Yes, there’s pointed human comedy to be mined from the very real stresses of married life, but this bonehead idiots-in-paradise farce raises issues only to gloss them over.”

October 16
The Coen brothers debut A Serious Man, Chris Rock stars in Good Hair, and of course, there’s the highly anticipated adaptation of Where The Wild Things Are.