Stars at Noon, the latest English language effort from esteemed French filmmaker Claire Denis, is puzzling and curious, but not in ways expected by those familiar with her work. Denis has built a career from producing provocative, viewer challenging material like Trouble Every Day, Beau Travail, and High Life, which is why it’s strange to see her pivoting to something like Stars at Noon, a mid-level political potboiler based on an old bestseller that’s frustratingly untethered to any time or space. Combine Denis’ listless and scattered approach with a pair of mismatched leads and some unnecessary modern updates, and Stars at Noon amounts to a curious misfire that even her most ardent admirers will have trouble defending with any degree of conviction.

Margaret Qualley stars as Trish, an American travel journalist who finds herself in an increasingly desperate situation in Nicaragua. Trish has been cut off by her funders, who’ve grown increasingly tired of her desire to write about crimes tied to ongoing political upheaval. Trish will seemingly do anything to make a quick buck and keep her career alive, so she begins cozying up to a mysterious British businessman named Daniel, played by Joe Alwyn. Daniel works for an oil company trying to drum up some business in the tumultuous country. Not long into their relationship of convenience, it becomes apparent that Daniel is being pursued by some dangerous people, forcing the pair to play a cat and mouse game with their pursuers.

Stars at Noon starts off like one might expect from Denis. It’s a purposefully abrasive yarn about two people who are very hard to like. Loveless sexuality – a favourite theme for Denis – abounds, and there are philosophical musings about politics, social customs, manipulation, and interpersonal relationships. There’s a pleasingly gritty visual quality that’s artful enough to stop just shy of being classified as verite and begging comparison to other thrillers pitched at a similar level. But unlike most of Denis’ other films, Stars at Noon never convinces viewers that this is leading anywhere interesting. It’s a hard film to take at face value, even if there are only two major issues that are weighing things down.

First, the setting of Stars at Noon is unconvincing and possibly compromised when compared to the text of the material. Stars at Noon is based on a 1986 novel by Denis Johnson that was set in 1984, a time of great political strife in Nicaragua and a wonderful setting for a potboiler such as this. But Stars at Noon isn’t set in 1984. It’s set in the present day, with the COVID pandemic serving as a major backdrop. Weaving the pandemic into Denis’ rather straightforward thriller adds almost nothing, save for a single sequence where crossing a border hinges on the main characters providing documentation of their vaccination or taking a rapid test. Almost all of this reads like it was supposed to be set in 1984, but through a variety of circumstances beyond the filmmaking team’s control, it was hastily reconfigured as a modern day story. The pivot, whether planned or reconfigured, results in a lot of narrative clunkiness, with some plot developments feeling out of step with how similar events would be handled in a modern context. If Denis’ film had retained some of the more etherial and challenging qualities of her earlier works, these stumbles and anachronisms might’ve been a bit more intentional. Instead, Stars at Noon is just another clunky thriller that could’ve been made by virtually anyone and felt the same as this.

Then there’s the glaring matter of pairing up Qualley and Alwyn, two capable performers who can’t build any chemistry here because they’re acting as if their characters inhabit two completely different movies. Qualley – in her most disappointing and miscalculated performance to date – embraces all of Trish’s worst impulses, making the character thoroughly unlikable and borderline unsympathetic. Qualley’s arguably over-the-top, camp courting performance as a “fake it till you make it” manipulator constantly runs afoul of Alwyn, who’s playing his character perfectly straight. Alwyn seems to be inhabiting the sort of mid-level thriller Stars at Noon would’ve been if it had been made in the late 80s, making Daniel an odd match for the thoroughly modern Trish. Qualley and Alwyn never build any sexual or friendly chemistry, making an already shaky narrative even more inauthentic. Qualley performs as if she’s in a Claire Denis movie. Alwyn performs as if he’s in a work-for-hire gig.

Stars at Noon has a few interesting moments peppered throughout. The opening sequence where Trish grows frustrated with a Nicaraguan soldier she has been carrying on with is classic Denis, and there’s a fun bit where our heroes have to stay one step ahead of the people following them while growing increasingly drunker by the moment. There’s also some nice work here from Benny Safdie as a mysterious “consultant” who pops into the story just past the halfway point. But the bright spots are fleeting in Stars at Noon, which isn’t so much awful as it is confused and lethargic. Given the talents involved, it’s hard to believe the results would be so mixed. Denis usually makes films that people either love or hate. Stars at Noon is the type of movie that’s just kinda there.

Stars at Noon opens in select cinemas (including Carlton Cinemas in Toronto) on Friday, October 14, 2022. It’s also available on VOD the same day. 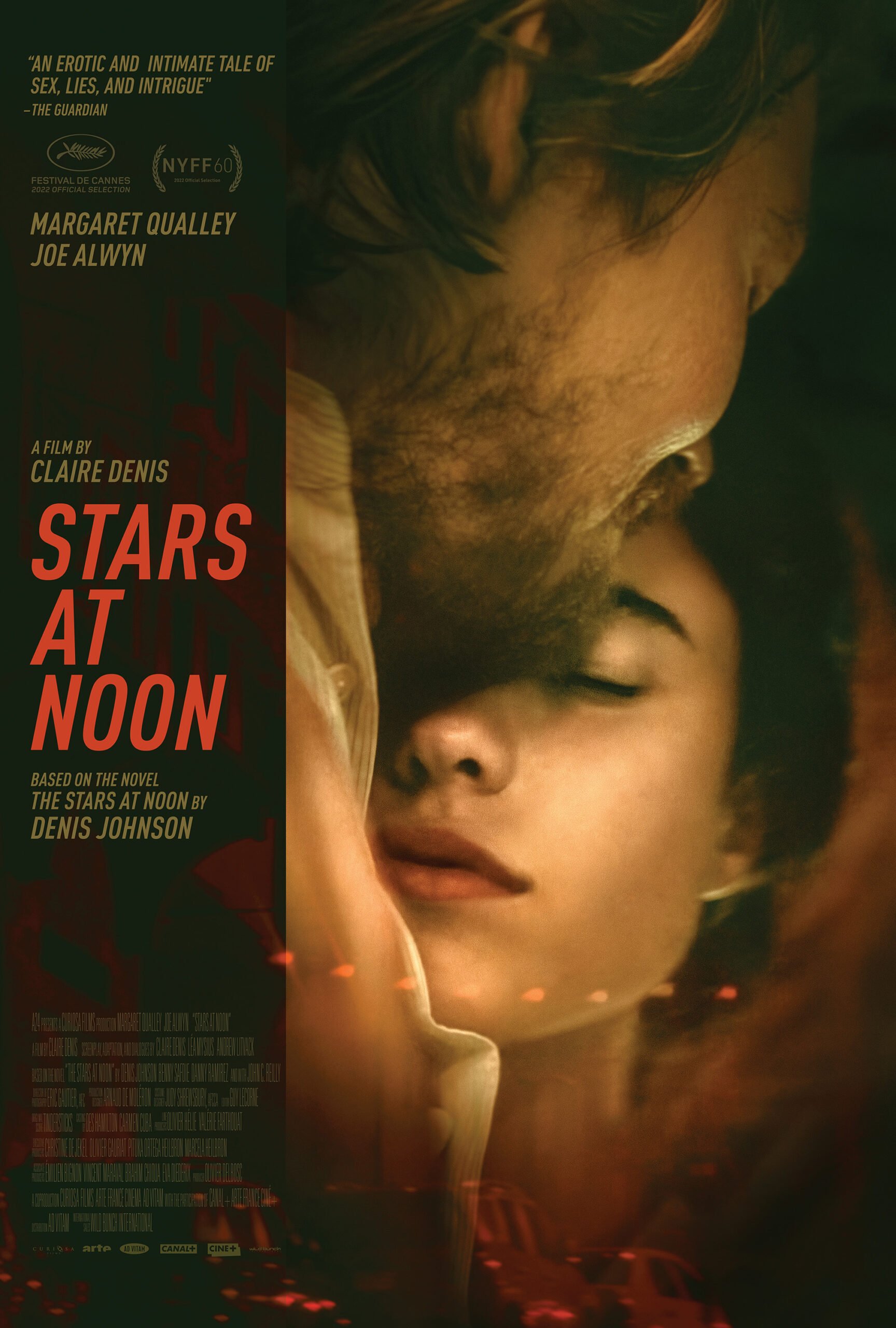