The Banshees of Inisherin Review | Screaming with Delight

The Banshees of Inisherin is a complex, thoughtful, and low key black comedy about the pitfalls of small town friendships told in some of the least friendly ways possible. It’s made via the collaboration of three people who previously worked together on a film about an unusual, tenuous sort of camaraderie, but this time the results are both scaled back in terms of scope and even twistier in terms of the psychological implications behind the core relationship. The Banshees of Inisherin can be viewed as a gleefully witty and misanthropic blast on one hand, while more attentive viewers will find themselves sucked in by everything left unsaid and lurking under the surface.

The year is 1923 – amid a backdrop of civil war – and the place is Inisherin, a quiet Irish island community where nothing much of note tends to happen. Reserved, but well liked farmer Padraic (Colin Farrell) heads off to the pub one afternoon to continue his clockwork-like tradition of having a few pints with his best mate, Colm (Brendan Gleeson), a musician. But this time something is off. Padraic tries to cozy up to Colm, but he’s rebuffed and told by his lifelong friend that he never wants to speak to him again. Understandably confused, Padraic tries to press Colm and see if he did anything wrong. He didn’t. Colm, who suffers from bouts of depression, just started seeing hanging out with Padraic as a waste of time. Things grow increasingly contentious, hostile, and eventually downright sadistic when Pardraic refuses to accept such an answer as a reason for throwing away a perfectly good friendship.

The Banshees of Inisherin is the latest film from writer-director Martin McDonagh (Seven Psychopaths, Three Billboards Outside Ebbing, Missouri) and a re-teaming for his In Bruges stars Farrell and Gleeson. But while their previous effort together was prone to more flights of fancy and a more audience friendly story, The Banshees of Inisherin is a lot more obtuse and subdued. Although the chosen time period makes this tale of a different sort of civil war a bit more on the nose, everything else about McDonagh’s latest suggests an artist working at their highest and subtlest level yet. Although McDonagh has made nothing but films about explosive interpersonal conflicts that turn into raging emotional infernos, The Banshees of Inisherin is more like slowly moving molten metal that’s scorching everything it touches.

The alchemy at work in McDonagh’s spot-on script is hard to explain because so much of it feels experiential. The viewer knows next to nothing about Padraic or Colm heading into their rift, and there’s not much that needs to be understood. By all accounts, their friendship is as mundane as the island they live on. Padraic is an unexceptional sad sack who lives with his sister, Siobhan (Kerry Condon), and a prized pony, and Colm lives with his beloved dog. It’s both easy to see why Colm would grow fed up with doing the same things over and over again, but also hard to see why cutting Padraic out of his life would suddenly solve all his existential malaise.

That’s a perfect jumping off point for a wit like McDonagh and two leads who have impeccable, proven chemistry. The Banshees of Inisherin fits nicely into McDonagh’s filmography because it’s another story about people prone to wild overreaction refusing to let up on the grievances and issues that vex them. Here, that seems a lot lower stakes than trying to carry out an assassination, writing a novel, or trying to bring a criminal to justice, but that’s also what makes McDonagh’s latest so interesting. The idea that this revolves around a person making a snap decision about someone else without having much reason to do so makes The Banshees of Inisherin eerily relatable. 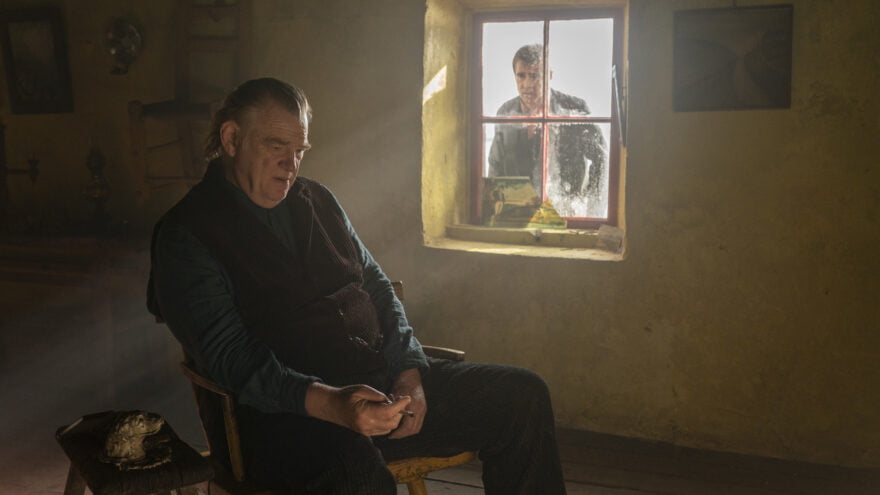 Padraic is constantly doubling down on his efforts to get Colm to like him again, virtually ruining his chances of them finding common ground. Colm grows increasingly agitated, leading to desperate measures to distance himself and further inner turmoil. That emotional interplay between the two characters raises interesting questions for the viewer to wrestle with. What’s worse: being a bland and unmemorable person or being the only friend of a bland and unmemorable person? Is inherent kindness or gentility a form of selfishness? When we lash out at people close to us, what does that say about our state of mind?

McDonagh has no answers to those questions, and it’s up to the audience to fill in the blanks, but that doesn’t mean that The Banshees of Inisherin is underdeveloped. It actually has passages where these questions become overwhelming. What starts off as a lightly sarcastic comedy takes one of McDonagh’s now trademarked turns into the darkest recesses of human nature. Only this time, that turn is all the more tragic because of the empathy the writer-director and his stars have built for these characters.

Farrell continues his hot streak of noteworthy performances by riding the razor’s edge between making Padraic insufferable and deeply sympathetic. Padraic is both pathetic and humane, like a lost puppy that won’t stop barking. Similarly, Gleeson’s gruffer Colm is acting unreasonable, but the actor always allows the viewer glimpses into the stoic man’s psyche, with plenty of subtle glimpses and pauses that show the character’s thought process rather than leaving everything implied and unsaid. Both are so memorable, it’s impossible to say who does a better job. They paint a perfect picture of people who belong together; a pedantic, yet entrancing folie a deux.

The Banshees of Inisherin also has two exceptional supporting performances and characters that further illustrate McDonagh’s complicated feelings about small town personalities. Condon is a revelation as Padraic’s vastly more intelligent and talented sister, who ends up becoming a key figure in trying to patch up the damaged bond with Colm. If she’s the voice of reason, then Barry Keoghan is the voice of chaos, playing a local creep that nobody except for Padraic seems to take pity upon. Keoghan takes a character that could’ve been nothing more than boorish comedic relief and builds layers of sympathy and sadness. By the end, the viewer will see Keoghan’s character in the same complex light as Padraic. Condon and Keoghan’s contributions to the greater whole shouldn’t be understated.

The island community of Inisherin is cold and inhospitable upon a cursory glance, something underlined nicely by cinematographer Ben Davis’ mastery of natural lighting. But scratch the surface and one will see crashing waves of ice, light, rage, and pain all competing for attention. The Banshees of Inisherin – much like its characters – is an unassuming and restrained production that’s a trojan horse for a wealth of larger themes. If it weren’t for the gorgeous locations and visual acuity, The Banshees of Inisherin would feel a bit stagey and static. But when the material and performances are this good, the story could take place anywhere in the world, and it would be easy for viewers to get caught up in the madness.

The Banshees of Inisherin opens at Cineplex Varsity and VIP Cinemas in Toronto on Friday, October 28, 2022. It expands to additional cities and theatres in the coming weeks. 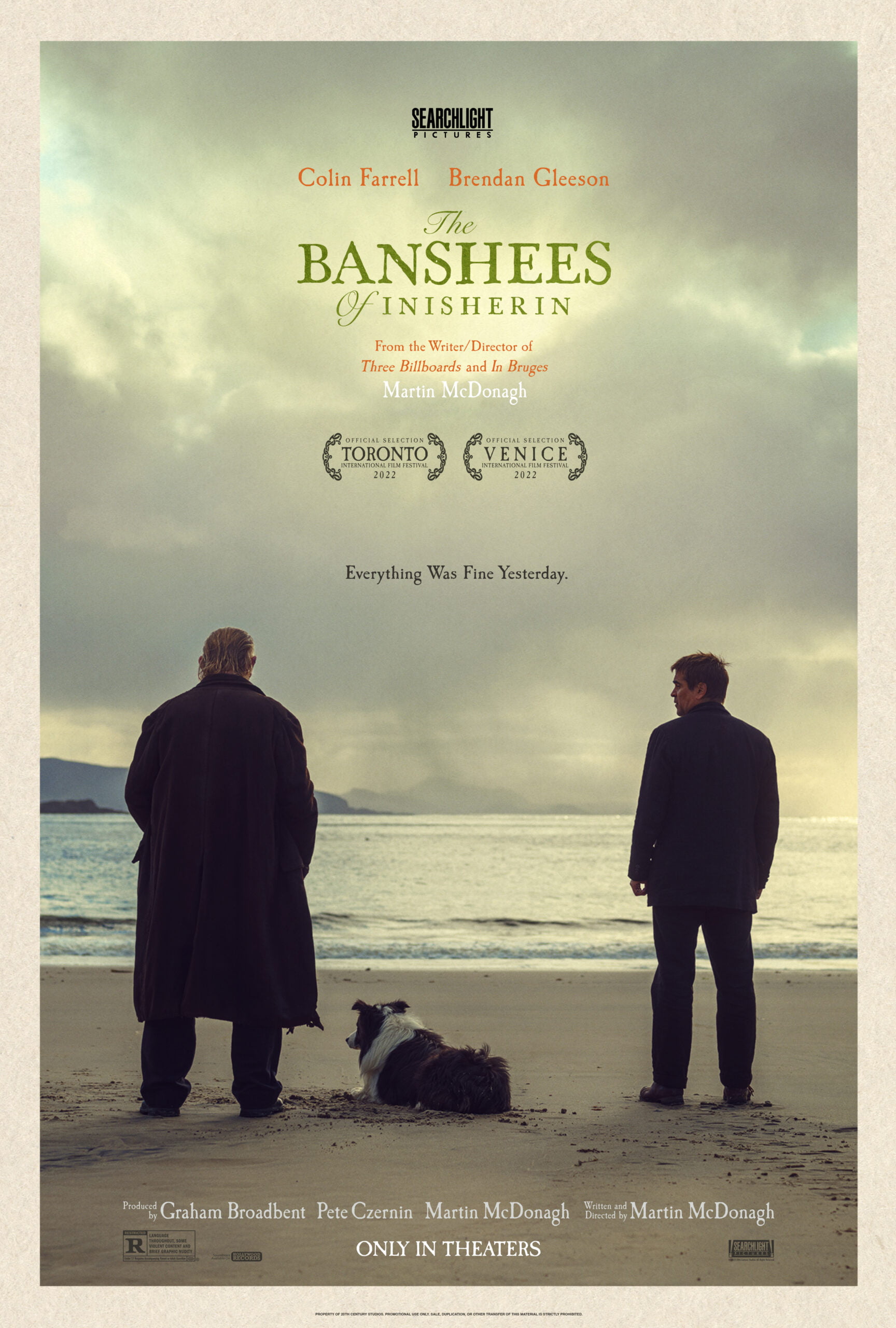